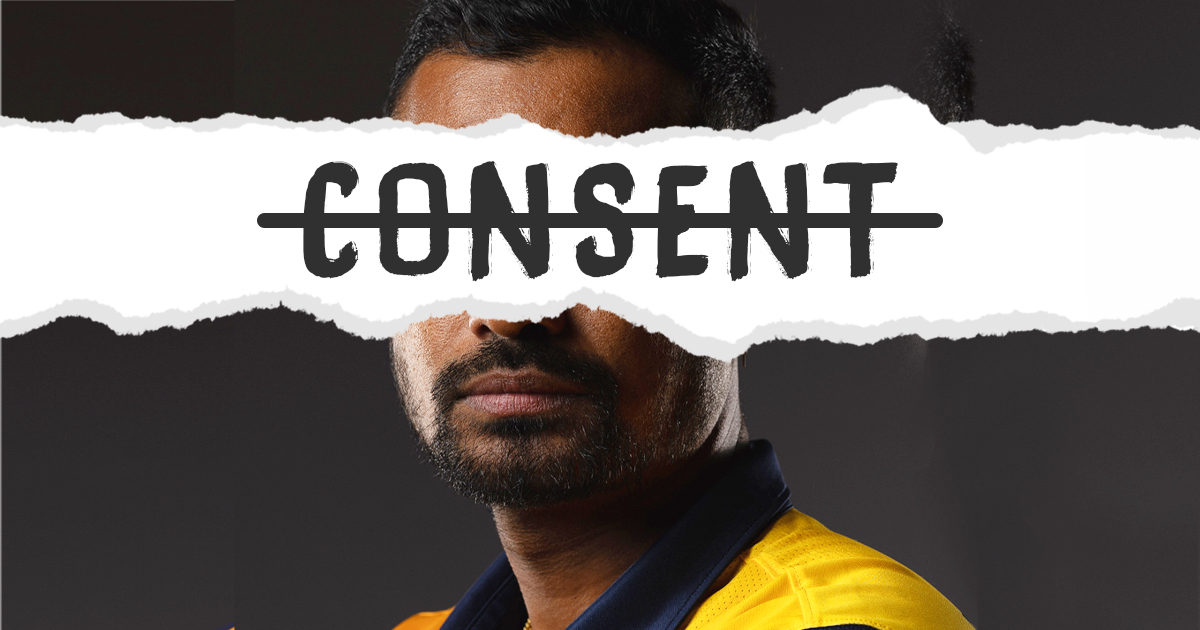 A few weeks ago, Sri Lankan cricketer Danushka Gunathilaka was arrested over sexual assault allegations. He was taken into custody on early 6 November morning by the Sydney police after being charged with four counts of sexual intercourse without consent. In the aftermath of the news, many took to social media to voice their opinions on the matter. Predictably, some of these opinions quickly devolved into victim-blaming and defence of the cricketer’s alleged actions.

“Why did she invite him over for sex in the first place?”, “Why did she do nothing until she was raped four times?”, “She’s probably looking for money”, these were all comments made in defence of the cricketer. Some members of the clergy made public remarks about how the woman wasn’t as innocent as the reports claimed, pointing the finger at dating apps instead. Politician S. B. Dissanayake, who has his own history of sports-related sexual allegations, dismissed the incident publicly, stating that “boys will be boys and it’s unfair to blame only Danushka.”

Not Just About Sex

According to the New South Wales police, Gunathilaka, 31, first contacted the 29-year-old alleged victim on the dating app, Tinder. Following multiple texts and calls, the pair met for a date on 2 November before going to the woman’s home in Rose Bay. Gunathilaka is alleged to have assaulted her multiple times over several hours. When the woman had asked the cricketer to wear a condom he had refused and choked her while arguing about it, the reports claim.

This is not a case of sex turning violent. Incidents like these lay bare a structural imbalance of power and expose the lack of understanding around consent. Sadly, these are neither isolated nor rare occurrences.

Scandals and allegations typically take the spotlight when they involve high-profile individuals. But the struggles of the average person facing harassment on a regular basis hardly make the headlines at the same level. But now, thanks to the accessibility and reach of social media, not every story of abuse goes unnoticed. A good example is a recent video circulating social media showing a senior police officer publicly harassing a female police officer.

But how far does this problem really go? According to a survey on women’s well-being in 2019, one in five ever-partnered women has experienced physical and/or sexual violence from a partner throughout their lifetime. As per the report, the most common act of sexual violence was women having sex with their partners when they did not want to, over fears of what the partner might do to them if they didn’t. Furthermore, the report pointed out that women who had suffered sexual violence during that year had experienced it not just once, but on multiple occasions. It also found that women who had their first sexual encounter before 18 were more likely to have been pressured or forced to do so.

The survey also found that two in five women agree with the idea that they are obliged to have sex with their husbands even when they don’t want to.

The situation is similarly grim when it comes to children. According to the National Child Protection Agency (NCPA), there have been 11,187 complaints pertaining to children in 2021. Of these complaints, 947 were reported under sexual harassment (82.8% increase YoY), 123 under rape, and 246 under grave sexual abuse to name a few.

Making matters worse, cyber harassment incidents have also seen an uptick over recent years. As per the Sri Lanka Computer Emergency Readiness Team (SLCERT), reports of abusive content were at 5,938 during 2021, up by 783.38% from the previous year.

However, it should be noted that this data may not paint a complete picture due to varying limitations in data gathering. Furthermore, this only accounts for those who chose to disclose their experience and/or those discovered. It’s likely that a more comprehensive overview may point to an even grimmer reality.

One of the biggest contributors to the current situation is the lack of education — specifically sex education. When we say sex education we typically tend to focus on the “having sex” part of it. In reality, it encompasses many other important aspects. As Hans Billimoria, founder of Grassrooted Trust put it, basic value systems like empathy, respect, and understanding of consent should play a vital role in sex education and society in general.

Typically, these values are rooted at a very young age. When it comes to consent, something as simple as understanding when to say no is key, as what you’re taught as a child carries well into your later years in life. The disparity of this level of understanding is the main reason why we see questions like “do we need consent even after marriage/even while having sex?”

As a result, young children develop unrealistic ideas and fantasies about sexual expectations. Left unattended, these ideas carry through to adulthood and into personal relationships. The other is that these very platforms are often weaponized to post non-consensual content online, be it an ex-partner seeking revenge or someone looking to make a quick buck. The combination of unrealistic sexual fantasies and lacking understanding of basic consent has made for massive societal problems as the numbers around sexual abuse reports have shown.

It also doesn’t help that mainstream media play an enabling role on many occasions. Throughout Gunathilaka’s case, the severity of the situation was downplayed on several occasions, from cartoon portrayals to underreporting of important details in media.

Current Efforts And Their Challenges

That is not to say efforts have not been made. For instance, SLCERT has set up a dedicated trilingual support line for social media-related inquiries. In March, a citizen-led initiative — SafeWebLK — was set up with the aim of setting a Code of Practice for online safety. More recently, the Family Planning Association (FPA) of Sri Lanka introduced Ask Sri, the country’s first chatbot on all things sex education.

Paba Deshapriya, who’s also part of Grassrooted, points out that even well-intentioned efforts like this are unlikely to make lasting impacts when the education system itself isn’t equipped to teach SexEd, much less talk about it.

As Bilimoria puts it, making a long-term impact comes down to making real changes to the education system. This means equipping the teaching community with the resources and skills to educate the community. Unfortunately, in a conservative society often dictated by politics and religious views, the sex-ed conversation will only go so far without a real governmental push at a national level. Until that happens, the stories of abuse and violation like that of Danushka Gunathilaka’s case will only continue to take the spotlight.