This year’s Colomboscope has showcased a plethora of talented artists from around the world, who embody its theme of ‘Language is Migrant’. The seventh edition of Colombo’s leading contemporary arts festival and creative platform began on Friday, January 21, opening itself up to local, regional, and international artists.

The festival line-up combines artists working within histories and experiences of movement and language. As such, the art being showcased is derived from the union of loss, silence, and erasures experienced by the respective artist; forming stories via composing, deciphering, performing, and narration.

Some of these stories have taken sonic form and during the pandemic, in the lead-up to Colomboscope, coalesce through an episodic online ‘radio’ series, A Thousand Channels, led by Syma Tariq, a British-Pakistani researcher and writer and former radio journalist who has long been interested in sound and its relation to politics. A Ph.D. student at the Centre for Creative Research into Sound Arts Practice (CRiSAP), University of the Arts, London, Tariq’s audio practice-based research began with a collaboration with Colomboscope artistic director Natasha Ginwala back in 2015.

Syna’s current doctoral research titled ‘Partition as a sonic condition: listening through the post colonised archive’ focuses on the discursive and temporal separations embedded in the histories of the 1947 partition of ‘British India’ through sonic-archival forms and processes. One of the key concerns of her practice is focused on the impact of historical division and destruction on listening – to testimony, to voices and to the contexts in which they are preserved in event-memory.

The Power Of Listening

Syma has brought the same interest in histories of listening and the linguistic, musical and diasporic forms it takes to Colomboscope: 2022, as both a storyteller and collaborator. Her contribution to the festival is ‘A Thousand Channels’, a process and research-led online ‘radio’ series that introduces collections of six tracks that feed into the festival theme, Language is Migrant.

In her own words, this iterative showcase is to remind people that “listening’s power ultimately lies in showing us the world in its invisibility,” and to bring various forms of experimental sonic production together.

In a piece for the Colomboscope guidebook, she writes: “I am obsessed with listening to recorded speech. The spontaneity of a voice note pinged from a friend on their way to meet me carries noise and disruptions and signs a text message never could. I admit I also discreetly record people in my daily life. As storytelling should never be taken as just a semantic exercise, sonic records of relation – in all their flawed, intimate forms – channel, in a Glissantian sense, multiple belongings, and multiple opacities.”

Her collaboration with Colomboscope: 2022 takes its title from the poet, novelist and theorist Édouard Glissant’s Poetics of Relation, which takes an archipelagic approach to postcolonial relations and identity in the Caribbean – “one way ashore, a thousand channels”.

A Thousand Channels takes the form of a four-part online radio programme that features conversation, poetry, music, specially commissioned sound works, and guest radio projects – three produced in the months leading up to the seventh edition of the festival, and the fourth largely recorded in Colombo while the festival was taking place. The work also had a presence during the festival, due to it being a part of Colomboscope’s listening spaces in Colombo Public Library and Lakhmahal Community Library.

The works, reports, and compositions encompass various aural modes and listening practices The project also brings together languages from across multiple Indian Ocean territories and beyond.

Each of the six tracks in each episode of A Thousand Channels is accompanied by ‘audio notes‘, text written and compiled by Syma and her collaborators that provide more context, translations and tracklists to what what the listener is hearing.

The first episode of this piece takes the listener between South Asia and Australia with historian and dreamer Samia Khatun and composer Lee Ingleton; to Assam through the lyrical contestations of Miyah Poets; to Bangladesh through its Urdu-speaking communities with lawyer and filmmaker Khalid Hussain and new radio art project Baba Betar, and to the UK desi dance floor with DJ Manara.

The second episode takes the listener to Indian-occupied Kashmir with anthropologist-poet Ather Zia, and to histories of Pakistan-occupied Kashmir through the cassette archive and sonic project, ‘Tape Letters’. Conceptions of African identity are sounded out by works of Belinda Zhawi and artist Christian Nyampeta, while the musical exchanges between East Africa and south/east Asia are understood via a playlist and conversation with archival record label Ostinato Records. A radio-archival riff on disharmonic ‘states of quo’ is presented by Berlin-based SAVVYZAAR radio. 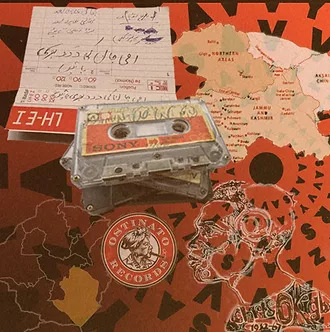 Each episode of the four-part, multilingual radio initiative A Thousand Channels is best explored on a desktop computer with headphones on www.colomboscope.lk/athousandchannels.

Artists like Syma showcased their work to the public during Colomboscope 2022: ‘Language is Migrant’. The festival, curated by Anushka Rajendran with Natasha Ginwala as the Artistic Director, took place from January 21-30, in locations that include the Colombo Public Library, Rio Cinema Complex, Barefoot Gallery, the Lakmahal Community Library, Lak Café, and W. A. Silva Museum. Highlights of the festival can be found on the Colomboscope website and social media pages.