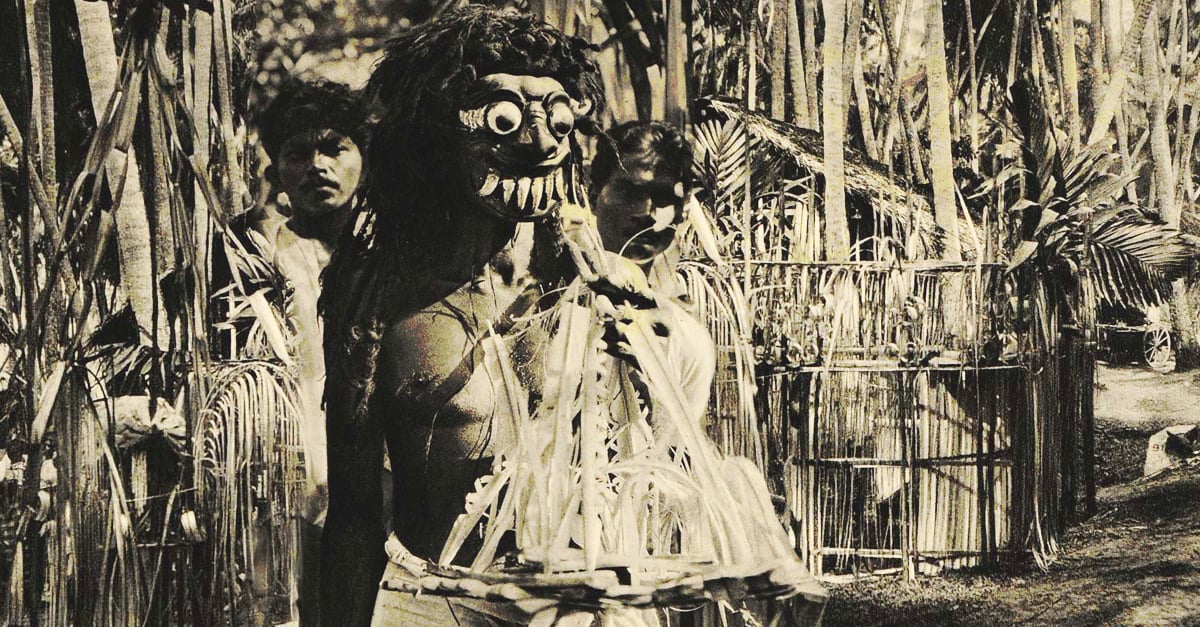 Despite the advances that Sri Lankans make in this modern age, the beliefs that Sri Lankans have in the supernatural runs deep and unshakeable. This was demonstrated publicly in October 2017 when the Captain of the national cricket team, Dinesh Chandimal stated that he received blessings from a sorcerer ahead of a two-match series against Pakistan and that was what led to the team’s victory. The sports minister at the time, Dayasiri Jayasekera had to publicly deny that he ordered the teams to seek the assistance of witchcraft and even threatened to sue a sorcerer.

However unusual it may seem in the 21st century, seeking the aid of the supernatural is a practice that goes back centuries, perhaps even millennia, in Sri Lanka. In 1865, Dandris de Silva Gooneratne attempted to succinctly record all this in his book “On Demonology and Witchcraft in Ceylon.” Gooneratne acknowledges that a belief in the supernatural and superstitions forms an integral part of any society but in context to Sri Lanka he states  “…here it has been moulded into a regular religion, arranged and methodized into a system, and carefully preserved in writing: so that the amount of influence, which it exercises over the thoughts, the habits, the everyday life of a Singhalese, is such as can hardly be believed by a stranger to the character of a genuine Singhalese Buddhist.”

Gooneratne divides Sri Lanka’s supernatural beliefs four ways — Demonism, Capuism, Grahaism and miscellaneous superstitions. The last of which he does not explain well in his book. Demonism is the worship of demons and evil spirits, Capuism is the worship of gods, demigods and deified heroes. Grahaism is the worship of planets and stars and the rest are supernatural beliefs that do not fall into the above categories. According to Gooneratne due to the lack of reliable records, it is not easy to fix a time of origin to these beliefs in Sri Lanka. He points a finger at Brahmanism and Vijaya, the exiled Indian Prince who came to Sri Lanka with his followers and is said to be the progenitor of the Sinhalese.  Although it further says that it is unclear whether forms of worship of the ‘wild ignorant savages who inhabited this island when Wijayo landed on it’ were assimilated to the Brahmanism doctrines. He notes that demons mentioned in Buddhist writings are objects of worship in Demonism and it recognises demons unknown to Buddhist literature as an indication of Demonism’s older roots. Demonism is considered a means of guarding against illness or curing illnesses that are caused by demons. Also a means of afflicting death, disease and other misfortunes on another person through demons. It is done by coercing them through offerings, spells, chants and ceremonies. “A Singhalese demon, therefore, is a different kind of being from the demons of European superstitions or from the Diabolus of the New Testament,” Gooneratne says. “For while the object of the latter is to ruin forever the soul of a man, that of the former is only to injure the body.” He explains that in Demonism, the objects of worship are not venerated, but they are only attempted to be induced either by flattery and bribery or threat. A priest of Demonism is called a ‘Yakadura’”, ‘Yakdessa’ or more commonly a ‘Cattandiya.’ According to Gooneratne the process of learning to be a Cattandiya takes around a year and the most laborious part of it is committing all the charms, invocations and songs to memory. He mentions that Cattandiyas receive no special respect or privileges and must engage in some other trade to make a living. Although today it’s not unusual for a popular Cattandiya to have a comfortable life on donations alone.

Capuism is described as almost the opposite of demonism. Where demonism uses the agency of demons to inflict or cure afflictions, Capuism intends to protect people from illnesses and afflictions. Gooneratne says, “The dewiyo or gods who are the objects of worship in Capuism are a more exalted class of beings, not possessed of the same evil dispositions as the demons, nor bringing sickness and death on innocent people; but reserving their powers of doing evil only for the punishment of those who in any way displease them.” A priest of Capuism is called a ‘Capua.’ Female priests may be named ‘Pattiny Hami’ after the deity Pattini deviyo. They led, and lead, much the same life as the Cattandiyas.

Grahaism, which is based on celestial objects, he says is “…a mixture of Hinduism and of a more refined species of Demonism, the first derived from the continent, the latter of indigenous growth, and both mixed together into a heterogeneous system.” A horoscope is created based on the position of certain celestial bodies at the time of a person’s birth. With it, a skilled practitioner can determine the planetary influences that can bring good or ill and at what time, and what ceremonies can be done to remedy any evil. In a case of misfortune, the planet god that is determined to be the cause of the evil must be propitiated with a Bali ceremony. Gooneratne says at one point only the aristocrats dabbled in this art as only they could afford the cost of the practitioners who had to come all the way from India. But during the reign of Sri Parakramabahu VI, the learned Buddhist priest Sri Rahula Thero taught the art to some of the lower castes and it became available to all people from that time.

The Demons of Sri Lanka are said to exist in an organised society under a royal government complete with laws and punishments. “Wessamony this dreaded king— whose subjects throng every part of the sky—carries in his hand a sword of gold, of such wondrous power that when he is displeased with any of his subjects, it flies out of his hand on its own accord, and, after cutting off the heads of a thousand offenders with the rapidity of lightning, returns to his hand again,” says Gooneratne. His punishments ranging from the aforementioned death to lesser ones such as burning, impaling and pouring molten metal down the offender’s throat. Wessamony and his viceroys and ministers are among the higher class of the two classes of demons. This upper class of demons leads lives only slightly inferior to gods living in grand palaces in the sky. The lower class pass their time closer to earth bringing misery to humans and receiving their offerings. It is these demons that demonism concerns itself with and are said to be gruesome and hideous-looking creatures.

While there are supposed to be billions of demons in existence, Demonism only focuses on 60 or so, and even fewer are given prominence. Such as the Reeri Yakseya (Blood Demon). He is represented as a creature with the face of a monkey and the body of a man with the colour of his skin a fiery red. He is supposed to have an influence in almost every disease afflicting men especially those that affect the blood. Reeri Yakseya has 18 different apparitions which some believe are not of one demon but many acting as one. Maha Sohon Yakseya (Great Graveyard Demon) is also a demon that is well known even today. Named so because he is supposed to frequent graveyards and happily surrounds himself with human carcasses to feed on.

There are also several demons mentioned by Gooneratne whose stories have more salacious concerns. For example, one origin story for the Calu Yakseya (Black Demon) says he is the spirit of the famous giant Neela Maha Yodaya, who upon accompanying his king as bodyguard to a country called Istreepura, which was only inhabited by women. All of whom fell in love with him and was torn to pieces in their grasp. He now tries to avenge his death on all women. The Calu Cumara Dewatava (Black Prince God), a dark blue demon in black garments,  is said to be always tormented by the passion of love, and when his gaze falls upon women it makes them fall ill. The Madana Yakseniyo or Female Demons of Lust are seven sisters, who would aid you in seducing someone’s affections if you provide suitable offerings to them.

The effective measures in any ceremony are charms, invocations and ‘Dolla’ offerings. Gooneratne believes that charms were originally introduced to Sri Lanka from India and they were assimilated into the existing Demonism in the land. Some say that Brahma was the original author of charms and they were improved on by ‘Rishis’ or ‘Pundits’ in ancient India. He describes common components of charms like the words Ohng Hreeng, which he says are an invocation to the Hindu Trinity, a grandiose description of the virtues and omnipotence of the Buddha, the names of Brahma, Siva and other Hindu deities and ending with the word ‘Eswah’ which is a described as a corruption of the Sanskrit term ‘Swaha’ which corresponds to ‘Amen.’ The effectiveness of a charm is said to be in the arrangement or combination of certain letters which have power over a specific entity. Each charm would have its own Jeewama ceremony where the charm is imbued into an object, most often a thread, which is then used for the intended purpose. It’s said that when the cattandiya continues with his incantations during the ceremony demons arrive in the guise of beasts and serpents. At this point, particular offerings must be hastily presented. Otherwise, they may strike the people down with sickness or death. They will do all they can to prevent the ceremony because it would mean that they are bound to the will of the charm.

This is only a small introduction, and one that is based on writings from 150 years ago, to the vast encyclopedia that is Sri Lankan demonism and witchcraft. But it is surprising and fascinating how much of these beliefs remain unchanged and routine in this 21st century. Gooneratne says “The most remarkable feature in the character of a Singhalese is not that he is a follower of any one of these superstitious systems, but that he is a follower of each and all of them at one and the same time: for the doctrines of some of these appear to be contradictory to, and inconsistent with each other.” But the ‘Singhalese’ also say that a drowning man will latch onto even a leaf of grass. The comfort and peace-of-mind that these ceremonies bring still hold water today.