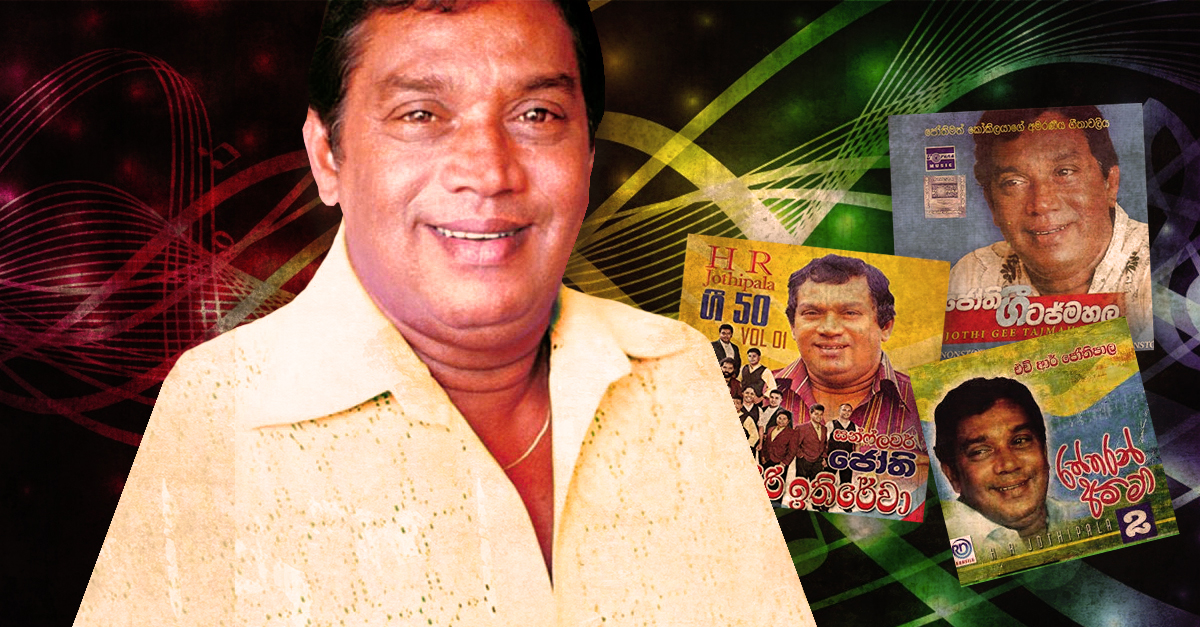 Like President Premadasa, everyone acknowledged the golden voice of Hettiarachichige Reginald Jothipala. A voice that would go on from that stage at the Sucharitha movement to sing hundreds upon hundreds of songs, for innumerable  films that were played for decades. This titan of sinhala popular music came from humble beginnings. Born on February 12, 1936 Jothi studied at St. Lawrence College, Maradana and St. John’s College, Dematagoda, but music was something he never studied, even at school. The only ‘education’ he had in music was spending time in tea shops listening to songs on the radio ashis poor home didn’t even have a radio.  Places around Maradana, those days were a gathering spot for many of his favourite artistes and living in Maradana gave him the golden opportunity to meet them..

People who knew him from back then, like 84-year old Rathnayake, reminisce about a young music addict, “Even in school we saw Jothi as someone who loved music. He would always be tapping on a metal tin and singing. Jothi wasn’t a person who suffered through life. He enjoyed life greatly and had a good time.”

According to accounts in the books ‘The Dignitary of Malays’, Jothi got his first step to perform thanks to musician Stanley Omar. He  gave him an opportunity to perform at the then Ceylon Broadcasting Corporation’s Amatuer Hour, which he won by performing the hindi song “Shukriya” by Talat Mahamood. During this time he also won the favour of musician R.A. Chandrasena, better known as Chandrasena Master. Chandrasena gave many opportunities to young Jothipala at his music events and  introduced him to other opportunities. Chandrasena connected him to director B.A.W. Jayamanne. This ultimately landed him a chance to sing for the movie Mathabedaya, and he packed and left for the airport for the flight to India where the audio for the movie was being recorded. Completely unaware that he needed a passport—and not owning one—he missed the flight and the chance.. He lost out on two more opportunities to be in a movie soundtrack. Director A.B. Raj of Perakadoru Bena deemed his voice unsuitable as did the sound engineer and director Sirisena Wimalaweera of the film Podi Putha, and that was after recording a song.

He finally got his break with the film Surathalee. But even then, the producer Jabir Cader, requested a sample of his voice and Jothi did not have the money to record. Musician Stanley Omar came to his rescue by giving him Rs. 35 for a recording. Even after being selected he was almost discarded as the Indian music directors were not amenable to his voice. However director Cyril Abeyratne’s wife made a case for Jothipala saying that it would be Sri Lankan audiences that hear him and they would love his voice, not the Indians. And so his career began with three songs for Surathalee that are still played today: Siriyame Sara, Aloka Deya, and Pudumeki Loke.

From then on, starting in the late sixties throughout the seventies Jothipala was the first and often the only choice of playback singer in Sri Lankan cinema. His hits made him a household name even if one had not  seen the film in question. His voice became the singing voice for all of Lankan cinema’s leading men as he lent his skills to hundreds of films in his short career. According to Nuwan Nayanajith Kumar’s Sri Lankan Film Chronicle, films where Jothi had contributed were released as late as 2003 which is 16 years after his passing. Maestro Premasiri Khemadasa said that no one could sing by ear like Jothi could, and it’s said that he was so talented that he never had to record a song twice. While he was criticised for singing songs that musicians simply set to popular hindi movie tunes, often of Mohammed Rafi, Rafi himself once said that Sri Lanka was too small a country for Jothi, “he should have been born in India.” He even worked with respected names like Pandith Amaradeva and Premasiri Khemadasa. In a time where television hadn’t even arrived, Jothi’s one-man-concert “Jothi Raathriya” was immensely popular leading to over 200 shows by some counts. Not to mention being a regular at any other musical event at the time.

Jothipala’s initials happened to H and R,  which aligned perfectly with what his friend and on-stage colleague Nihal Nelson called him: Hadawatha Raththaran Jothipala or Heart-of-Gold Jothipala. Nelson said, “More than half of the people of this country knew who Jothipala was and all of them also knew that Jothipala was a golden man with a good heart… He really was someone with an honest, humble heart without inhuman qualities like hypocrisy, jealousy, and greed. The heart of such a man is gold. Gold doesn’t turn into another metal. Like that Jothipala will always be golden.”

Veteran journalist Ernest Waduge recalls that one time two beggars from Colombo came to a packed Jothi Raathriya after collecting 2 cent coins to make up ten rupees each for ten rupee tickets. But when they arrived the ten rupee tickets were gone and only the fifty rupee tickets were left. They implored the man at the ticket booth to let them in explaining the lengths they had to go to to collect even this much. Finally word reached Jothipala himself and he came down to the ticket booth to see what happened. The beggars implored to him saying “Sir we came to hear your songs. We even collected this much singing your songs but they say that the tickets are over.”

“Malli, these are my real fans,” said Jothipala and took them with him into the hall and sat them on stage right next to the chief guests.

His once neighbors at the Maligawatta Flats recall him with fondness as a humble man, quick to party and sing with famous friends and ordinary people alike. He would never say no to an autograph, he ate from the neighborhood shop and bathe at the common well. It is said that he asked then President Premadasa to limit the rent on the flats to an affordable amount. He famously distributed lottery winnings of Rs.50000 to friends and family without a second thought.

Video of the funeral of H.R. Jothipala.

Even today, over three decades after his death, Jothipala’s songs are a constant presence on radio: if not the originals by him, a cover by a different artiste. Nihal Nelson who called Jothi golden-hearted also said that he was a job bank. “Jothipala was similar to a bank that provided jobs to unemployed young men who could sing” he says. Nelson further emphasizes that many people live comfortable lives buying houses and cars, and even become professional singers by making money singing Jothi’s songs. “When you sing those songs you gain an acceptance from the people” says Nelson.

It is perhaps a twist of irony that people are being criticised for profiting from covering an artist who himself was criticised for singing to Hindi movie tunes. But the impact that the golden hearted character and his golden voice had on the masses and on sinhala music culture cannot be underestimated.

As film star Vijaya Kumaranatunga said at the opening of the Maligawatta Jothipala memorial, “We don’t need another Jothipala. There was only one Jothipala. We will only need that Jothipala even in future. W. Even if no more Jothipalas are born, we trust that as long as this country stands H.R. Jothipala will forever remain a part of this land.”