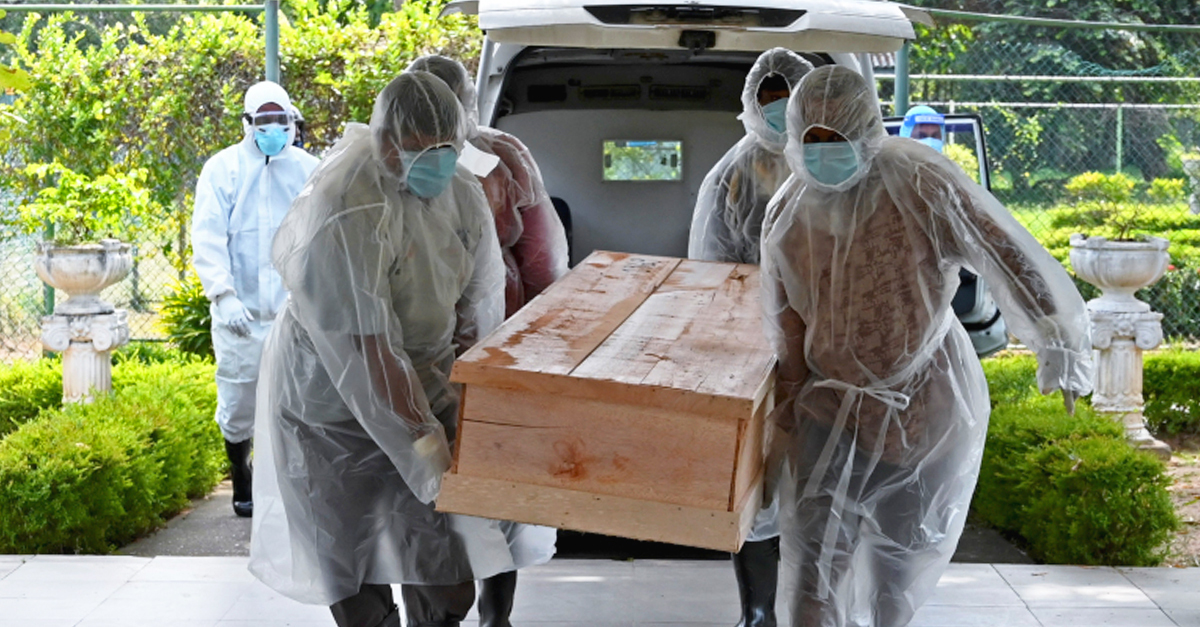 At the time of publication, Sri Lanka has recorded 305 deaths as a result of COVID-19, which first emerged a little over a year ago in Wuhan, China.

At the end of a tumultuous year, Sri Lanka had reported 210 deaths — most of which were reported in the latter part of 2020, following the outbreak of the country’s deadlier second wave of the disease.

Less than one month into the new year, Sri Lanka has already recorded 80 deaths.

Globally, the issue of death during the pandemic has been surrounded by controversies: in the United States, false claims that the death toll was drastically lower than official statistics became a topic of viral debate in September. Other countries, such as India and the United Kingdom, have been accused of undercounting.

Our small nation has also faced its fair share of cause célèbre. In March, the government issued a gazette notification that made it mandatory for bodies of all COVID-19 victims to be cremated within 24 hours of demise. This decree has since become the subject of much controversy, defended by some, criticised by others, and even challenged in the Supreme Court. Many of those opposing the government order are from the minority Muslim community, for whom cremation conflicts with religious beliefs.

Here we look at how Sri Lanka has recorded over 200 deaths during the course of the 12 months since the virus was first recorded in the country — and the various issues that cropped up concerning the COVID-19 deaths.

March To May: The First Lockdown

It was in March, when the first local case was discovered, that the country went into a nationwide lockdown. Since then, 0ver 60,000 COVID-19 cases have been reported, with the number of recoveries a little beyond 52,000.

The first casualty was reported on 28 March. The deceased was a 60-year-old male from Marawila, Gampaha, who died of diabetic conditions and multiple organ failure as a result of the coronavirus.

By the end of May, the government had contained the virus to those repatriated from other countries and a number of other prominent, but controlled clusters, and the country had recorded only 10 deaths. Confident that the situation was under control, the lockdown was lifted, and the country was even able to safely conduct an islandwide general election — which had been delayed and postponed twice before — in August.

The Calm Before The Storm

June, August, and September were relatively calm compared to the previous months under lockdown. One new COVID-19 cluster was discovered — at the Kandakadu Treatment and Rehabilitation Centre — and was successfully contained. Only three deaths were recorded in those three months. By the end of September, Sri Lanka’s death toll was 13.

The month of September was business as usual for many — albeit with precautionary measures, such as mask-wearing and social distancing, still in place. It had been four months since the government-imposed COVID-19 curfew had been eased and life had returned to a ‘new’ normal.

In the entire month of September, only 309 cases were reported. One death was reported on 14 September. The deceased was a 60-year-old Sri Lankan returnee from Bahrain who passed away from cardiac arrest while receiving treatment for the disease at the Chilaw General Hospital.

The calm of September came to a quick end in October with the discovery of the seventh cluster of patients in Divulapitiya-Minuwangoda.

The day after the cluster was identified, 5 October, a total of 75 cases were reported. Over seven thousand cases (7,283 to be exact) were reported that month; an average of 235 cases daily.

The first death for the month was reported on 22 October, when a 50-year-old woman from Kuliyapitiya died due to chronic conditions worsened by the coronavirus. This marked the country’s 14th COVID-19 casualty, and the first in over a month. Her death was followed by six others — overall seven deaths that month — making October the month with the most deaths until that point.

However, the number was quickly surpassed in the months of November (106) and December (84), which collectively recorded 190 deaths. At the end of the year, the death toll stood at 210.

A majority of the deaths, since the beginning of the outbreak, have been reported from the Colombo district and the Western Province, according to data from the Ministry of Health.

What Does The Data Tell Us?

As per health ministry data, COVID-19 has killed far more men than women in Sri Lanka.

Data compiled from March to December shows that out of all the reported victims, 62.9% were male while the remaining 37.1% were female.

This statistic is similar to the global state of affairs. Early in the coronavirus outbreak, Chinese hospital data revealed a similar disparity. The difference persisted in other Asian countries as well as in Europe and the United States.

This, however, does not directly indicate that men are more susceptible to the virus than women. Research suggests that behaviour, overall health, and other environmental factors might factor into the susceptibility to COVID-19.

Since the outset of the outbreak, authorities have been struggling to identify vulnerable groups, who would face a higher risk from COVID-19.

Medical authorities such as the World Health Organization (WHO) and the U.S. Centers for Disease Control and Prevention (CDC) have identified that older adults, those living in nursing homes/long-term care facilities, and individuals with underlying conditions are more susceptible to the disease.

Similarly, the data released by Sri Lanka’s Ministry of Health indicates that the senior population is indeed at a higher risk of experiencing serious consequences of the coronavirus. In Sri Lanka, most COVID-19 victims have been within the age range of 61 to 70 and 71-80.

But studies have also shown that no matter the age, underlying medical conditions, chronic illnesses, and noncommunicable disease heighten the risk of COVID-19.

Globally, there is consistent and strong evidence to suggest that conditions of cancer, chronic kidney disease, heart failure, and lung diseases are exacerbated by COVID-19.

Similarly, in Sri Lanka, 74.3% of the casualties had recorded pre-existing medical conditions such as cancer, kidney disease, heart-related issues, and lung disease, which were exacerbated by COVID-19. While the coronavirus has embittered these underlying conditions, roughly 25% of the deaths have occurred solely due to COVID-19 itself.

While Sri Lanka continues to report more COVID-19 cases every day, it would be worth reminding ourselves that the statistics above are more than just numbers — each one signifies a life lost to a deadly disease. Although the vaccine roll-out hints at the beginning of an end to what has been nearly a year of anxiety and despair, it is still far too early to let our guards down. With that in mind, let us continue to adhere to health guidelines, wear our masks, practice social distancing, and stay home as much as possible.