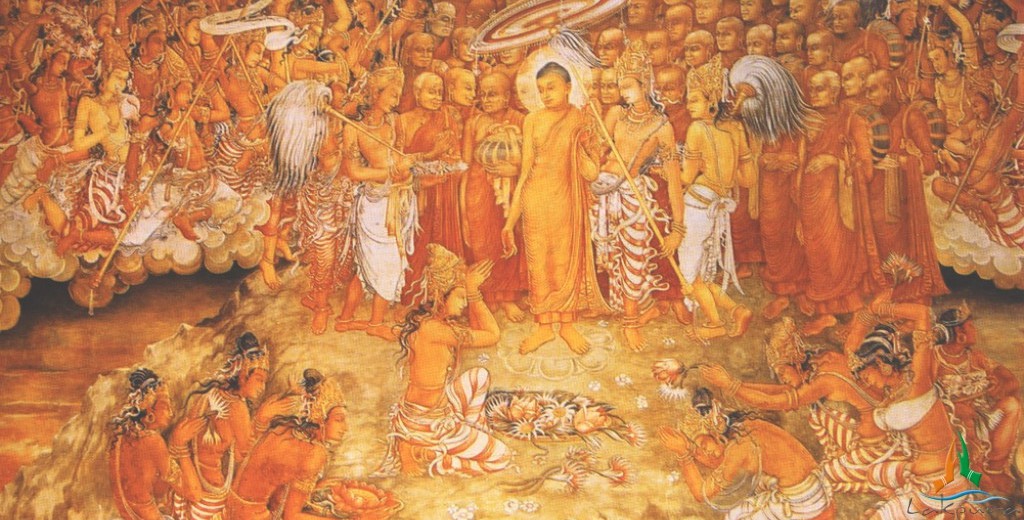 The frescoes of Sigiriya. The carvings of Embekke devalaya. The architectural wonders of ancient Anuradhapura and Polonnaruwa. Sri Lanka has many beautiful works of art that celebrate hundreds of years of history and culture. Some of these works of art, also highlight the history and teachings of Buddhism.

The Buddhist tradition of art in Sri Lanka first began after Mahinda Thero journeyed to Sri Lanka. Since then, this tradition of art was subject to various changes over different time periods. Hence, each temple, shrine and place of Buddhist religious worship scattered across the country contain frescoes which are unique.

Here are some frescoes which add colour and beauty to some of the better known temples in and around the city of Colombo.

The frescoes of the Kelani Raja Maha Viharaya 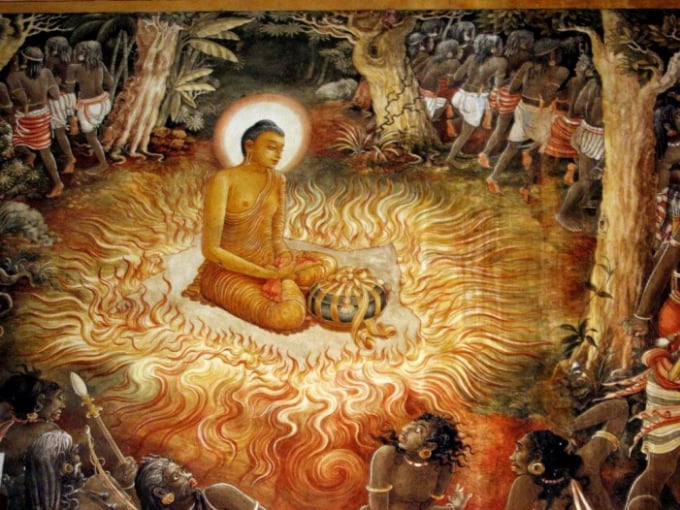 The frescoes in the Kelaniya temple depict scenes from Lord Buddha, historical events related to Buddhism and scenes from various jataka stories. lanka.com

The murals in Buddhist temples usually depict Lord Buddha and scenes from the various Jataka stories, but those in the Kelaniya temple are unique because they depict historical events related to Buddhism as well.

The oldest frescoes in the Kelaniya temple can be found in the two image houses, the Raja Pilimage and the Oth Pilimage. It is said that the frescoes found on the walls, ceilings and canopies of these two image houses can be categorised under six different themes.

These frescoes depict scenes from the Lord Buddha’s life, the solosmasthana—the sixteen places that Buddha is said to have visited on his journeys to Sri Lanka—, the sermon that Buddha delivered at Kelaniya and scenes from seven different jataka stories.

The ceilings of the image houses also display frescoes depicting the key concepts and beliefs of Buddhism, including beliefs related to astrology. Moreover, the many images of Buddhist monks painted on the walls of the Oth Pilimage cannot be found in any other temple in Sri Lanka. Some of the frescoes in this temple were painted by Solias Mendis in the twentieth century. Image courtesy anitasfeast.com

Some of the frescoes which can be found in the Kelani Raja Maha Viharaya were painted In the 20th century, by master artist Solias Mendis. The recent frescoes that were painted in the Kelani Raja Maha Viharaya were created by Solias Mendis.  His frescoes display scenes related to the Buddha’s life and the history of Buddhism in Sri Lanka. The Kelaniya Temple also has the most number of frescoes which depict scenes from the history of Buddhism in Sri Lanka. King Pathis II accepting the sacred Bo sapling, Princess Hemamala and Prince Danthu bringing Lord Buddha’s tooth relic to Sri Lanka, and the writing of the Tripitaka at Aluvihara are some of the scenes which can be found at the Ran Pilimage at the Kelaniya Temple.

Other frescoes by Solias Mendis can be found in the nava vihara geya of the Kelaniya Temple. Among these, the most important murals depict scenes from Lord Buddha’s journey to Sri Lanka, and the Buddha’s visits to Mahiyanganaya, Nagadeepa, Kelaniya and Adam’s Peak. Solias Mendis has also painted frescoes in the nava vihara geya which illustrate the Kelani Wanshaya, the sermon that Lord Buddha preached on his visit to Kelaniya.

The frescoes of the Bellanwila Temple The frescoes at the Bellanwila Temple in Boralesgamuwa depict a few important events that took place during King Asoka’s reign and notable events related to Buddhism in Sri Lanka. Image courtesy Daily FT

The frescoes at the Bellanwila Temple in Boralesgamuwa were modelled after the frescoes of the Thivanka image house in Polonnaruwa. They were painted by the artist Somabandu Vidyapathi, who was also inspired by classical Sinhalese art and Indian art.

The most prominent features of these frescoes is the artistic manner in which people are portrayed, and the way that colour has been creatively used to highlight the themes behind these frescoes.

The murals are painted on the northern and southern walls of the Budu madura (shrine hall) at the Bellanwila temple. Important events of the Buddha’s life, and even a few important events that took place during King Asoka’s reign, are depicted here. Other notable events that took place in the history of Buddhism in Sri Lanka, such as the planting of the Sri Maha Bodhi sapling at Anuradhapura, the distribution of the 32 saplings that grew from the sacred Bo tree, and the planting of one of these saplings at the Bellanwila temple, are depicted.

Somabandu Vidyapathi spent three years working on these frescoes, and the largest of the 13 murals painted on the walls of the shrine hall is six meters broad and 14 meters long. The artist had used oil based paints for these frescoes, mainly yellow, red, brown and black, and his use of light and shadow makes his creations seem almost life-like.

The frescoes of the Gothami temple in Borella 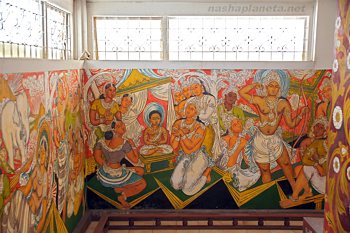 The frescoes in the Gothami temple in Borella were painted by George Keyt. Image courtesy nashaplaneta.net

This temple located on Gothami Mawatha in Borella is considered a landmark site displaying contemporary Buddhist temple frescoes. These frescoes were painted by one of the most renowned Sri Lankan artists of the 20th century: George Keyt. Painted in 1940, these decorative frescoes highlight the styles of the modern Sri Lankan art, but stay rooted in the traditional concepts, ideas and themes of the Buddhist temples frescoes.

George Keyt’s art is interesting because his personal style of art has been inspired by various other styles, from the Classical Hindu tradition to the European style. Even the influence of famous artists such as Picasso are visible in George Keyt’s murals.

Much like Solias Mendis’ frescoes at the Kelaniya Temple, George Keyt, too, painted his frescoes at the Gothami temple on a large scale, and each fresco displayed a particular theme related to Buddhism and its history in Sri Lanka.

The manner in which he had painted the images of people in his frescoes is a feature which is unique to his art, bringing him international recognition.

The temples mentioned above are only a few of the prominent temples in Colombo, containing frescoes which stand out for their dynamic colours, designs and themes. There are a few other temples in and around the city of Colombo, each with their own display of fascinating art and architecture.Featured image courtesy flickr.com