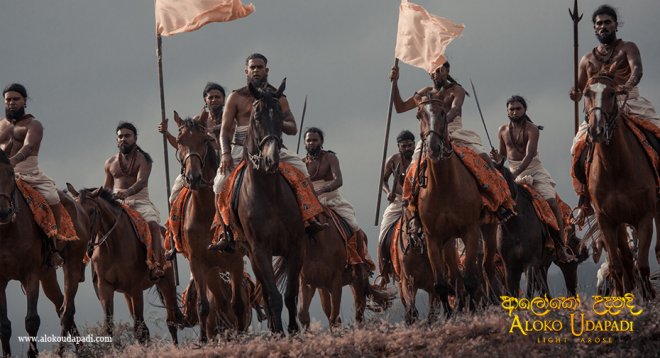 Before getting into any serious criticism of Chathra Weeraman’s directorial debut Aloko Udapadi (Light Arose), it must be commended for one important thing. For the first time in a long time, a commercially viable Sri Lankan film that isn’t a complete embarrassment (creatively speaking) is getting local moviegoers to actually go to the movies again; and for that reason alone, Aloko Udapadi deserves at least some of the praise it’s been getting since its theatrical release last week. If you haven’t seen the film yet, I urge you to go see it ‒ not necessarily because it’s so good it absolutely must be seen on the big screen (honestly, if this had been a Hollywood production, I would probably have told you to wait for the DVD), but because no film is better poised right now than this ambitious crowd-pleaser of a historical epic to give the long bedridden Sinhala cinema the oxygen it so desperately needs and, I dare say, undoubtedly deserves.

To critique a period film like Aloko Udapadi, whose central storyline pits one race of ancient people against another, without getting entangled in the inevitably contentious ethnopolitical implications of that storyline is nigh impossible; but in the interest of keeping this review brief and concise and the comments section clean and devoid of any threats of bodily harm, I’m going to resist the urge to open that otherwise irresistible can of worms and, instead, focus purely on its technical merits ‒ or lack thereof ‒ simply as a piece of filmmaking. One thing must be noted, however. The recent spate of historical epics have been notorious ‒ at least among students of film ‒ for being wrapped in thinly veiled triumphalism in their narratives and blatantly obvious jingoism in their marketing campaigns. Aloko Udapadi, to the credit of its producers, has tried its best not to fall into this all too common trapping, opting instead to tell a good, old-fashioned story. It’s doubly unfortunate, therefore, that, despite its best efforts, the film only barely manages to rise above the low standards set by its predecessors, as we shall soon see.

The battle scenes and fight scenes, though visually interesting for the most part, felt over-choreographed and more than a little cringeworthy. Image courtesy alokoudapadi.com

Without giving too much away (spoiler warning for anyone who doesn’t have even a cursory understanding of local history), Aloko Udapadi tells the story of King Valagambahu of Anuradhapura who was overthrown a mere five months after ascending the throne and had to beat mounting odds to save the country as well as the state religion from marauding South Indian armies. Battling enemies both within and without, the noble but inexperienced King (Uddika Premarathna) is forced to go into hiding and raise an army of his own in unforgiving conditions of drought and famine in order to win back the kingdom for his people. On top of all this, Buddhist monks have started to die out in hordes, and if the Sinhalese don’t win the war one way or another, it will be the end of the Buddhist faith as they know it. (No pressure, your highness.) Now, as far as subject matter goes, this is as epic as it gets for any aspiring writer/director and is among the most bankable material a producer could ask for. As easy as it is to accuse filmmakers [and the producers that finance them] of being lazy, safe, and unoriginal for constantly cashing in on the ancient chronicles and the wealth of stories therein ‒ particularly given the sociopolitical realities of a country like ours ‒ you can’t blame them for giving it a shot. It’s just unfortunate that everyone keeps missing the mark.

Aloko Udapadi is not a bad film by any means. (There have been worse). Compared to other period films made in Sri Lanka, it certainly is in a league of its own. The VFX shots are particularly praiseworthy, with CGI used effectively and sparingly in a way that has never been seen before in a local production. The cinematography, too, is commendable, if a little derivative, and director Weeraman has chosen a suitably muted colour palette for his film in a way that helps maintain the immersion and adds to the overall experience. To reiterate, it’s not a bad film; it’s a badly put together film, if that makes sense. While it’s not as insufferable as most films in the genre, it’s far from the masterpiece that the social media hype machine would have you believe. The film is riddled with pacing issues, sloppy writing, over-choreographed battle sequences, and extremely questionable editing choices, with scenes of poignance being jarringly cut away to distractingly upbeat or intense moments in the narrative in a way that isn’t exactly seamless. It all seems rather disjointed, and takes away from the flashes of brilliance this film has to offer (and it does have quite a few of them, to be fair). The acting is nothing to write home about either, with everyone, senior and novice alike, playing it safe, with little to no screen presence. There were no real standout roles or performances of note, at least to me, but if I had to pick, I would say the indigenous brahmin Theeya, played by a magnificently bearded Roshan Ravindra, was a treat to watch. (The cameo from a near-naked W. Jayasiri running around screaming “මහා කළු සිංහලය පලා යනෝ!” was an added bonus).

One of my biggest complaints about this film ‒ and, indeed, all the rest of them starting from Jackson Anthony’s Abha ‒ is how terribly unsubtle it is. While it does fare better than most entries in the genre in this regard ‒ for example, the camera pans away in a handful of scenes to imply violence or some other element rather than linger gratuitously ‒ for the most part, everything is rather on the nose: from the dialogue and the heroics of the protagonists to the severity of the plot’s main conflict and the conveniently timed rain to cleanse the blood from the heroes’ swords. Then there are the antagonists, the invading Chola kings: comically one-dimensional caricatures of pure evil that would be right at home in a Tamil action movie from the mid-’90s (one of them actually twirls his moustache). It’s more than a little campy, especially considering that the film sets out to be anything but. However, I won’t go as far as to call it pretentious. There is something earnest about Weeraman’s direction that makes you want to sit through the film, even though the characters themselves ‒ whose motivations are unclear, to say the least, and rarely show any depth or nuance ‒ aren’t especially likeable and you don’t really care what happens to them (in a strictly storytelling perspective. Please put away the pitchforks).

A common response to any criticism of Aloko Udapadi, at least on social networking sites, is that it shouldn’t be judged by Hollywood standards. This, in my humble opinion, is a cop-out. It is very much possible to make a halfway decent film of this nature with a limited budget and what little resources our film industry has at its disposal, as Sir Lester James Pieris ably demonstrated with his outstanding biopic of Veera Puran Appu starring Ravindra Randeniya as far back as 1979. The incessant need to channel Ridley Scott, et al, and ape the big-budget blockbuster outings from Hollywood by borrowing their tired tropes and cliches (both visually and narratively) at every turn is what leads the increasingly discerning Sri Lankan audiences to compare and contrast (and inevitably complain). The solution, then, is not to cry foul but, rather, make our films as authentic as possible. Aloko Udapadi, to its credit, tries its damnedest to reverse this trend. And, thankfully, it somewhat succeeds. But only somewhat ‒ and therein lies the rub. Barring a handful of art house films, Sinhala cinema ‒ particularly commercial cinema ‒ is stagnating, and if the industry is serious about getting anywhere globally, it needs to strive for something better than just good enough.