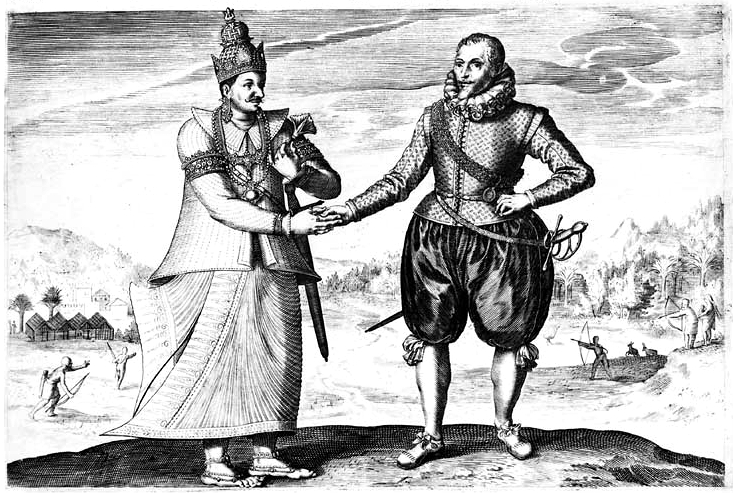 From the 16th century onwards, the European colonial powers made a significant cultural impact on many aspects of Sri Lankan culture. Modern Sinhala was influenced  immensely by its contact with three European languages, the languages of the colonisers: Portuguese, Dutch, and English. Prior to the Colonial invasions, Ceylon’s strategic location at the southernmost part of the sea routes that connected Asia with the Mediterranean Sea brought in many Arab, Persian, and Indian sailors and merchants. They left an indelible cultural imprint on the country by changing the social, cultural, political, economic, and linguistic outlooks of the country.

Abraham Mendis Gunasekara, in his Comprehensive Grammar of the Sinhalese Language (1891) enumerates approximately 400 loan words from Tamil, 231 from Portuguese, 112 from Dutch, and 76 from English. Sannasgala (1976: p. 87) stated that most of the Sinhala words derived from foreign sources were either Portuguese, Dutch, English, Malay/Javanese, Tamil, or Arabic.

Sinhala belongs to the larger umbrella Proto-Indo-European language group, which includes languages of the West like Greek, Latin, German, French, English, Lithuanian, and Russian. The Proto-Indo-European parent group branches off into Indo-Aryan, which includes Sanskrit, Pāli, Hindi, Bengali and, of course, Sinhala. The Indo-Aryan language group arose due to the migration of Indo-Aryan speakers from India, as early as 5 BC.  Over the centuries, Sinhala has undergone significant phonetic and semantic changes. Since the Sinhala language is a member of the Indo-Aryan family, it is not difficult to connect its vocables with cognate Indo-European forms. The Sinhala language as we know it today has evolved through four different eras. Image courtesy exploresrilanka.lk

The evolution of Sinhala can be divided into four eras (Geiger, 1938) :

The modern Sinhala language contains many Portuguese and Dutch terms. It is believed that many Portuguese loans would have entered Sinhala after the departure of the Portuguese from the island in 1658. The Portuguese, unlike the later Dutch and British, integrated well with the locals. They intermarried with the daughters of the land and birthed a new language, Sri Lankan Portuguese Creole, which flourished as a lingua franca in the island for over three and a half centuries.

The Dutch language has also influenced Sinhala considerably in the fields of law, administration, and commerce. This is not surprising, considering the fact that it was the Dutch who introduced the Roman Dutch Law, which survives today as the general law of the land. P.B Sannasgala has cited numerous Dutch loans pertaining not only to legal, administrative, and mercantile matters, but also to food, drinks, clothing, and personal ornamentation, games, household goods, and utensils, etc.

This article seeks to dig a little deeper into the linguistic affinity between Sinhala and other foreign languages by exploring the etymological origins of many loan words borrowed from Portuguese, Dutch, and English. [Sources: Tagus to Taprobane: Portuguese Impact on the Socio-culture of Sri Lanka from 1505 AD by Shihan de Silva Jayasuriya, and Zeylanica: A Study of the Peoples and Languages of Sri Lanka by Asiff Hussein.] The Portuguese kings banned women from accompanying navigators to the colonies. This naturally led to intermarriage with the indigenous women of the land. Portuguese ‘casados’ were the married soldiers (soldados in Portuguese) who were permanent residents of Ceylon. The Casados and Topazes (children from Portuguese native marriages) were not part of the regular army. They were only expected to take up arms in defence of their homes or during a major emergency.  However, they sometimes volunteered for particular military operations.  The Sinhala verb kasada bandinava comes from the Portuguese past participle casado meaning ‘married’. The Portuguese doucasado was corrupted into dikkasada, Sinhala for divorced. As a result of Portuguese intermarriages with the local women, Portuguese surnames and personal names were introduced to Sri Lanka. Many Sri Lankans have Parangi (from ‘Farangi’ meaning ‘foreigner’) surnames like Abrew (Abreu), Almeda (Almeida), Aponso (Afonso), De Mel (Melo), Perera (Pereira),  Ruberu (Ribeiro) etc. These people could be descendants of the Portuguese or of those converted to Roman Catholicism who acquired  Portuguese names at baptism.

The Sinhalese also had several titles for men and women which were used according to the age, rank and qualities of the person (Knox, 1681 : p. 291). The Portuguese introduced new titles to Sri Lanka. The title of Dom (i.e Sir) and Dona (i.e lady) were bestowed upon chieftains and their wives who converted to Christianity at baptism. Dom and Dona are used as prefixes to personal names. For example, Dona Katarina and Dom Juan. Dona Catherina (also known as Kusumasana Devi) was Queen of Kandy in the sixteenth century who later became the Queen Consort to King Wimaladharmasuriya I after the defeat of King Rajasinhe I. Gajaman Nona was a famous Sri Lankan poet who lived in the south of the country around the time the Dutch rule ended and early British rule began. She was baptised Dona Isabella Koraneliya Perumal. Sri Lankans added Dom or Dona to their names at baptism, to signal their pre-eminence.

Do you remember the famous song by the Gypsies from the late 90s, “Signore” ? The term ‘Senhor’ (lord or gentleman) became ‘Sinno’ in Sinhala and it is used even today in the rural areas of Sri Lanka. The feminine equivalent, Segnora, however, is not used. Instead, Nona is used for younger ladies and nona mahaththaya for older ladies in aristocratic families. According to Nell (1888), even 100 years ago, Sinno (derived from Senhor) was used to address Portuguese-speaking men who wore western clothes and Nona was used to address European and burgher (Eurasian) ladies.

Portuguese And Dutch Influences On Cities And Street Names Many town and street names used today also find their origins in either the Dutch or Portuguese languages, some examples being:

Grandpass (from ‘Grando Passo’) ‒ In the book Changing Face of Colombo by R.L Brohier, there is an interesting story which explains the origin of the name Grandpass:

“As in the long years of hitherto past, at that period too the Kelani Ganga, which sweeps round north Colombo to roll its waters into the sea was unabridged. The river was at no season of the year fordable and there were two points where ferries were established. The Portuguese bestowed the connotation “Passo Grande” (present Grand-Pass) to the crossing at Nakalagam. The second crossing was called Pasbetal, literally pass of the boats, was not far from Grand-Pass, but neared the mouth of the river.”

Bloemendahl (Vale of Flowers) – In the enclave of the Kelani Ganga and off its left bank, which lay north of the Cinnamon plantation, there were extensive areas of grass fields and swampy land which extend southwards from Bloemendahl.  Most of it was once owned by a Hollander, and named after him : “Vender Meyden’s Polder” (Pasture lands reclaimed from the marshes). The name still remains in old deeds to recall the fact that it was in Dutch times drained and used as a model farm.

The language of the colonisers lent their influence to other aspects of Sri Lankan life, too, such as: Jeththukara is an adjective in Sinhala that is used to describe something fancy or fashionable. Jeito in Portuguese means ‘fashion’.  As Sri Lankan women married Portuguese men, they adopted the Portuguese style of dress. Their sense of fashion was a hybrid of European origin. We could assume that the conversion to Roman Catholicism might have provided an impetus in Sri Lankans to emulate Portuguese clothes. The Portuguese influence on Sri Lankan attire can be traced through the modern Sinhala lexicon.

Beeralu is a lace-making craft that is still practiced in Southern Province of Sri Lanka. Pillow Lace or Beeralu derives from the Portuguese word bilro (bobbin). The wig/false hair worn by Portuguese women  was called cabelleira, havariya in Sinhala. Other attire-related words that find their origins in the Portuguese language include:

There are also borrowings from Portuguese describing Sri Lankan jewellery, and terms associated with sewing and cutting, such as: Yes, even kaju is a word we owe to the Portuguese. Image courtesy: iStock

In many ways, it was the Portuguese who transformed the island into the tropical paradise that Sri Lanka is often described to be. They introduced plants to their colonies during their voyages by transplanting fruits and vegetables from one continent to another: oranges, pineapples, maize, manioc, and tobacco are good examples of this. In 1658, the Portuguese were ousted by the Dutch, who subsequently colonised the coastal regions of Sri Lanka. They were amazed by the variety of vegetation in the island at that time. Among the everyday Sri Lankan food names that were influenced by the Portuguese are:

The Portuguese also introduced many recipes into Sri Lankan cuisine. Even the word kussiya (kitchen) comes from the Portuguese word cozinho.

The Portuguese ‘pudim’ is an egg custard with sauce (Wright, 1969). However, in contemporary Sri Lanka, pudim is a general term that embraces a variety of desserts.

Doce means ‘sweet’ or ‘candy’ in Portuguese. The sugar-glazed melon candy, aka puhul dosi, is a Sri Lankan delicacy loved by nearly everyone.

In Old Portuguese, bread was known as pan. Other food and food-related words influenced by Portuguese include: Good old rathinya – also a word we use thanks to colonial influence. Image courtesy dupress.com

It is no secret that Sri Lankans love their booze, and whether that was thanks to colonial influences or not is up for debate ‒ what we do know, however, is that the colonisers did lend us a few interesting words to use in relation to drinking:

The language of the colonisers clearly lent their influence to pretty much all aspects of Sri Lankan lifestyles; so much so that we can safely conclude that Sri Lankans are in fact a lot more multicultural than we may have guessed.