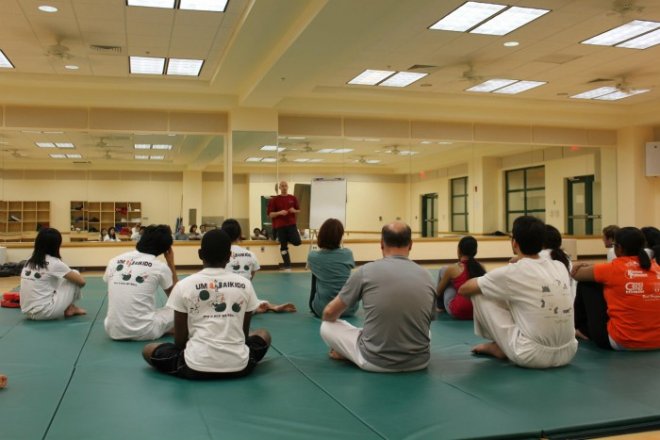 In 2012, a young physiotherapy intern was brutally gang-raped in New Delhi. The story shocked the world, particularly as the 23 year old, nicknamed Damini by the press, initially survived the attack and showed remarkable resilience before succumbing to her injuries. Her tragic story spurred many to action. And so the Damini Project was born.

The Damini Project is a group that provides information on self- defense, including non – violent communication techniques and ways to fend off attacks in an effort to empower women. Today, the Damini Project has roots in America, Mexico, India and now Sri Lanka as well.

The project’s presence in Sri Lanka is timely given the increasing cases reported on violence against women.  Each week, the newspapers report stories similar to Damini’s. Most notably was that of Vithya, the 18 year old schoolgirl from Pungudutheevu, Jaffna, who was gang-raped and killed on her way home from school on May 13th. Her death caused outrage and sparked protests that spread from Jaffna to Colombo. Yet Vithya’s story is far from isolated. At a recent forum won women’s participation in politics, titled “Celebrating Women: Towards an inclusive political culture” on March 6, State Minister for Children’s Affairs Rosy Senanayake revealed that between 2012 to 2014, incidents of violence against women has increased by as much as 20%.

The people behind Damini Project intend to address this issue.

Tithira Hiranjith Perera is a software engineer by day. He also has a passion for martial arts, being the owner and Head Instructor of the Sri Lanka School of Jeet Kune Do (JKD). He’s an apprentice instructor in Progressive Fighting Systems (PFS) and has experience in Wing Chun, karate, tai chi and Filipino martial arts. Currently, he serves as main platform referee for MMA Sri Lanka.

Tithira began training in JKD when he was just 17 years old with martial artist Ranil Piyaratna. In JKD, Tithira found a lifelong passion.

“Jeet Kune Do changed my life and my mindset. It isn’t just a sport; it’s a hybrid martial art theory,” he explained.

JKD was founded by Bruce Lee, the Hong Kong martial artist and actor, in 1973. Lee believed that the martial arts style had become too rigid and unrealistic. He wanted to create a movement that mirrored real, spontaneous combat, with martial artists who moved ‘like water’. JKD combines minimal movement with speed for maximum effect.

Tithira was inspired by Bruce Lee’s philosophy, and worked hard to master it himself.

Thanks to his teacher Ranil, he soon received the opportunity of attending a seminar in India held by a founding member of the Damini Project and owner and chief training officer of Jeet Kune Do Athletic Association, Sifu Harinder Singh Sabharwal.  It was Singh who broached the idea of a Sri Lankan arm of the Damini Project to Tithira, who eagerly accepted the challenge to share his love of JKD techniques with others.

“Yes, I’m a software engineer, but I like to help people. There are many young ladies who are in grave danger across the country,” Tithira said.

Tithira believes that the skill set the Damini Project provides is vital for a broad spectrum of women, from the poverty stricken to corporate executives juggling busy schedules. “I’d like to do a programme for the upcountry tea-pluckers, for example. Even in the Colombo area, there are so many women who are juggling busy schedules and so are unaware of the danger they are in.”

Prageeth is a Mixed Martial Arts (MMA) enthusiast, and is a senior member and event coordinator of MMA Sri Lanka. He also has karate and krav maga experience. His involvement in the Damini Project stemmed from simply hearing stories about what his own friends went through.

“I know people who have undergone sexual assault and been sexually harassed. Last year, I really started doing research on it, and I was amazed how much girls and women here have to go through, how scared they were to move around at night,” he said.

“They didn’t know how to escape the situations they were in and how to deal with it. So when Tithira asked me to join I thought, why not give back and do something to help them?”

He hopes that the Damini Project’s work will go some way towards alleviating the situation in Sri Lanka.

“JKD is what works in a real situation, because it discards flowery technique. It’s very linear – simply teaching how to get from point A to point B, and so it’s easy to pick up,” he explained.

But the duo behind the Sri Lankan version of the Damini Project aim to do more than simply teach people how to throw a punch.

“We try to help people through the Damini Project – not just to develop a martial arts mentality, but also a good attitude. We train people to be good men and women, not just fighters,” Tithira said.

Apart from that, the Project aims to make people more alert and adept at avoiding dangerous situations. “We want people to learn how to survive and live in the present moment. It’s not about fighting, but using minimal force to neutralise and escape,” Tithira explained.

“We don’t want to make people scared. We just want people to be aware and not be immersed in their phones,” Prageeth added.

How to take down a would be offender.

Each workshop is tailor-made to suit the participant’s lifestyles and level of experience with martial arts – whether they are schoolchildren or busy corporate executives.

It’s a difficult task for Tithira and Prageeth, who both juggle full-time jobs with their love of martial arts. Yet they recently held one of their workshops for a HR recruitment company, Jexe Lanka, which was conducted successfully.

“They really appreciated what we were doing, and enjoyed learning new techniques. Apart from that, it’s about changing mindsets as well. It’s a fun project to do,” Prageeth said on the workshop.

They are currently planning a seminar for the Girl Guide’s Association in Maliyadeva Girl’s College, Kurunegala.