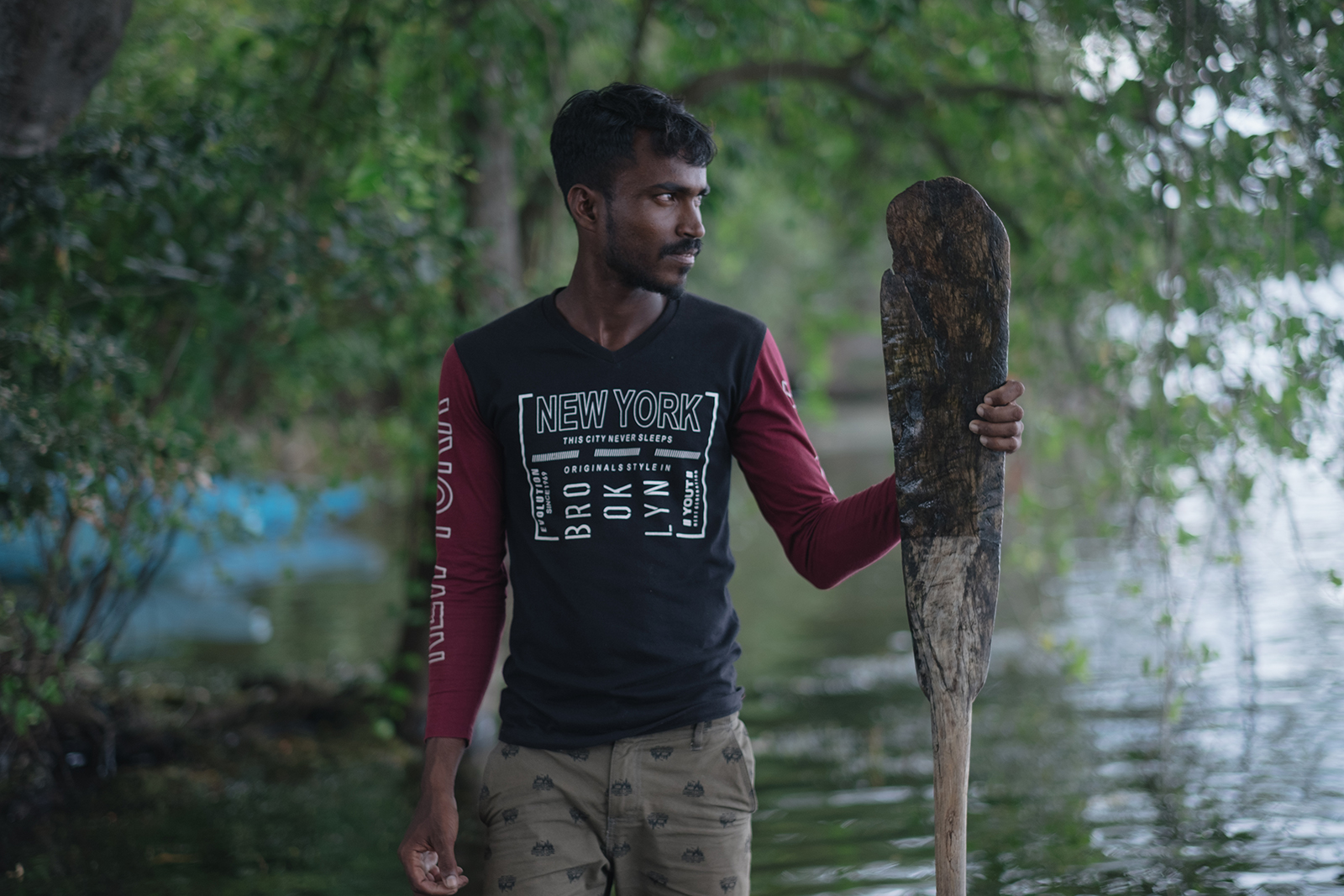 Every morning, 26-year-old Dinesh Ruban sets off with the fishermen in his village to set crab traps in the vast Vakarai lagoon on Sri Lanka’s east coast. Ruban, a father of two young children, is just one of over 400 ‘dhoni’ boat fishermen in his area. Acute poverty and the lack of career prospects in the region meant Ruban was compelled to follow in his father’s footsteps and become a fisherman. Dropping out of school at the age of 13, he started off by helping his father and now lays claim to a fishing dhoni (non-motorised traditional boat) of his own.

The low cost of fishing gear for the non-motorised dhoni and the once bountiful lagoon meant fishermen such as Ruban were previously able to earn an income of around Rs. 2000 – 2500 per day. But times have become tough for the rural and poverty ridden fisher community of Vakarai in Batticaloa.

The COVID-19 pandemic and the severe economic crisis dealt blow after blow to the community and its livelihood. This left the fisher community unable to earn a decent daily wage and struggling to make ends meet.

These days, as Ruban and his friends pull up the crab traps, they are often encountered with a poor catch. Crestfallen, they lower the traps to the water once again before heading to shore. During the off-season, the dhoni boat fishermen of Vakarai do not use their boats to fish. Instead, they set crab traps in the lagoon, returning every few hours to check on the catch. This mode of fishing, that’s dictated by the seasons, was not a significant issue for the community – but now Ruban says the fisheries harvest of the lagoon has depleted significantly in recent times.

“Due to the economic crisis, many, especially the youth, have started unauthorised fishing in the lagoon using dhonis because it is a cheap and quick way to make some money,” he said. According to Ruban, this has led to overfishing and a depletion of the fisheries resources in the lagoon. Citing the rising costs of fuel, buyers are also now offering significantly reduced rates for their hard-caught fish. The galloping inflation in the country has also affected Ruban and his young family. A hearty meal and many other necessities for his two young children are increasingly difficult to come by.

Understanding their vulnerability in the current economic crisis, the Food and Agriculture Organization of the United Nations (FAO) recently provided emergency support to dhoni fishermen in the area. FAO, through funding from the UN Central Emergency Response Fund (UN-CERF), provided emergency cash assistance to over 7,000 small-scale marine artisanal fishers using non-motorised traditional boats, who have traditionally been amongst the poorest within the fishing community. The fishers were selected from six of the poorest fisheries districts. Ruban was among the 666 fishermen from Vakarai chosen as beneficiaries of the timely project.

“Now I only earn about Rs. 1000 – 2000 per day due to all these issues. I have nothing left when I spend it on the daily necessities. But, after receiving the cash transfers, I was able to purchase essentials for the house and also managed to set some money aside,” he said. Ruban hopes he will be able to buy a new set of nets ahead of the next fishing season so that he can continue the only occupation he has ever known.

The emergency support from the Food and Agriculture Organization could not have come at a better time for 45-year-old Ramesh Kumar Damayanthi. For 28 years, Damayanthi and husband have engaged in fishing in the area. When her husband along with other fishermen return to shore with their catch, it is often up to Damayanthi to sort the fish and prepare it for sale. But these days, with her husband in hospital due to a heart ailment, Damayanthi has not been able to work. Damayanthi is unable to fish and now spends a significant time on the road traveling to the Batticaloa Teaching Hospital over 60km away. In the past few months, her income has reduced to a mere Rs. 500 – 1000 per day.

“Sometimes we would skip meals. My youngest child, who is 9, would also miss school on certain days as I was unable to provide a school lunch. She would complain she was hungry and could not focus on her studies,” she said. “The emergency relief was helpful during this time. I was able to buy food and even school supplies for my daughter,” she added.

Small-scale fishers like Ruban and Damayanthi have faced multiple challenges this year. Reduced fishing days, decreased fish catch, and reduced demand due to the fall in purchasing power in rural areas have all significantly impacted the community. FAO, together with its partners, continues to advocate for the most vulnerable fishers and smallholder farmers across Sri Lanka at every level and will continue its emergency response to address urgent food security needs and protect the livelihoods of fishers and farmers in the most affected districts.

Besides helping vulnerable fishers through unconditional cash transfers, FAO Sri Lanka is also working with bilateral donors, Norway and the Republic of Korea to strengthen the fisheries and aquaculture sectors of Sri Lanka and implementing a Technical Cooperation Programme to reduce post-harvest losses in the fisheries sector and improve the management of depleting natural resources.

For those like Ruban and Damanyanthi, these programmes can change their whole lives.