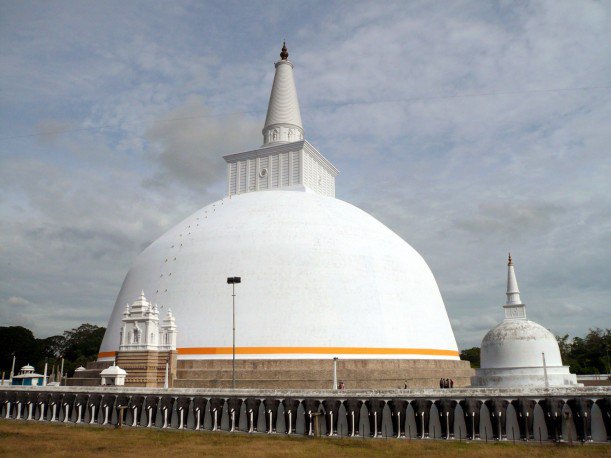 There are three main elements that are venerated in a Buddhist temple; these are the stupa, the Bodhi tree and the image house. The stupa always takes the most important spot in the temple, and is traditionally the first point of worship, because they are built enshrining (ideally) relics of the Lord Buddha, or those of an Arahath, or a very important priest. The image below depicts the main components of a stupa.

The main components of a stupa

Typically, a stupa is built upon several sturdy basal rings (Pesa walalu). Upon this is built the largest and most visible part of the entire structure, the dome (Garbhaya). It is within this dome that holy relics are enshrined. The square chamber (Hathares kotuwa) comes above the dome, and it is upon this that one finds the ring of deity images (Dewatha kotuwa). The conical pinnacle or spire (Koth kerella) is the next most prominent feature, which is topped with a large crystal.

While these generalised sections make up the stupa, the dome in particular can take on one of several shapes. In Sri Lanka, the following shapes are most prominent:

Arguably, the single most prominent ancient stupa in Sri Lanka, the Ruwanweliseya in Anuradhapura, which dates back to the era of the same name, as well as the Rankothvihara and Kirivehera in Polonnaruwa, are examples of this shape.

The Mahathupa, or Ruwanweliseya in Anuradhapura. (Photo credit : Radhika Wijesekera)

One of the oldest temples in the country takes on this shape ‒ the Kelaniya Rajamaha Viharaya. Said to enshrine the jewel-encrusted throne upon which the Lord Buddha was seated during a sermon, this temple predates the Anuradhapura era. The tallest brick structure in the world, the Jethawanarama stupa has a dome that also takes on the shape of a paddy heap, as does the mighty Abhayagiri stupa.

This is possibly the most popular shape for stupas in the country. Famed as the first stupa to have been built subsequent to the arrival of Buddhism in Sri Lanka, the Thuparama stupa takes on the shape of a bell. It is not a big structure, though very significant owing to the afore mentioned fact, and that it enshrines the sacred collar bone relic of the Lord Buddha.

The small Thuparamaya pagoda, with a few of the stone pillars which once held up its protective Wahalkada. (Photo credit : Radhika Wijesekera)

The lotus shaped stupas are not very abundant in this country, yet there are a few examples that can be noted. These include the Indikatuseya in Mihintale, the Vijayarama in Anuradhapura, and (had it been completed) the Demala Maha Seya in Polonnaruwa, which was intended to take on the shape of a lotus flower. The principle difference of this shape when compared to the others appears to be the significantly large basal rings.

Are There Only Five Shapes?

The five shapes mentioned above are those that have been most abundantly used in the construction of stupas in ancient times. A sixth shape, Aamalakara, takes on the shape of a Nelli fruit. Today, there are no stupas of this shape in Sri Lanka, although there is a relic casket that was discovered, which takes on this shape. The stupas of today, furthermore, take on more modern shapes.

Beyond this, of course, the rest of the Buddhist world has stupas that vary from those that are found here. For example, the Shwedagon Pagoda in Yangon takes on a conical shape, while many shapes and variations are seen among the thousands of stupas in the ancient kingdom of Bagan in Myanmar. Those in Nepal and Thailand are also different from those found in Sri Lanka. This difference is possibly attributed to the fact that the domes of the stupas in Sri Lanka retain architectural similarities to those found in ancient India, from where the religion originates.

Do Stupas In Sri Lanka Take On Any Other Shapes?

There is a lesser known temple, but one which has great significance to the Kingdom of Thailand located in Kotahena. Built by a Thai prince named Prisdang Chumsai back in 1775, the Dipaduttamaramaya temple in Kotahena is the oldest temple to be built within the Colombo city limits. Subsequent to a series of diplomatic correspondences that happened between the Ven. Waskaduwe Sri Subhuthi Maha Nayaka Thera, the greatest Pali scholar of his time, and the Kingdoms of Siam and Burma, the Royal Prince developed a strong liking towards Buddhism. Fifteen years later, he gave up his worldly possessions and became ordained in 1896 under the Maha Nayaka Thera and took on the name of Ven. P.C Jinavarawansa Thera ‒ the protégé of the Nayaka Thera ‒ he was eventually bestowed with the Chief Incumbency of the Dipaduttamaramaya Temple in 1904.

Some ancient stupas have a watadage which provides protection to the stupa. The three circles of stone pillars seen today around the Thuparama temple are those that once formed part of its watadage.

Today, there are three famous watadage complexes in Sri Lanka; these are namely the Thiriyaya watadage (which, incidentally, is the first temple to have been built in this land), the Medirigiriya watadage, and the Polonnaruwa watadage. But more on this another day.