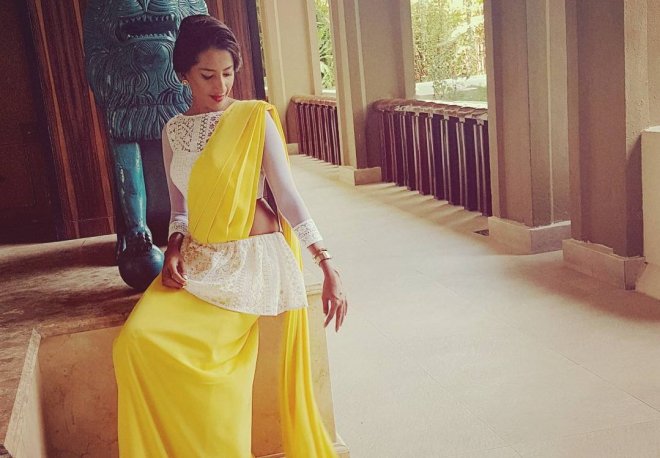 Frills That Add Flair: How The ‘Osariya’ Came To Be

The saree is one of the oldest forms of women’s clothing, which is believed to date back to 5,000 years ago, when cotton was first cultivated and used to produce cloth. It is also one of the most common and most popular forms of women’s attire in the South Asian region, with different styles in various regions of the Indian subcontinent. While styles of saree draping introduced from India are quite popular in Sri Lanka, the osariya – also known as the Kandyan saree – is our own unique style of saree draping, and it is often considered to be the national dress of the Sinhalese women of Sri Lanka. While it is different from the nivi style that is popular in India, the origins of the osariya comes from trends in South India, and may have been introduced to Kandyan culture through the influence of the Nayakkar kings who ruled the Kandyan Kingdom before the advent of British rule.

The wife of a Kandyan chief wearing an Osariya. Image courtesy indianamulets.com.au

What makes the osariya distinct from other styles of saree draping found in the Indian subcontinent is the addition of an elaborate frill, or odokkuwa, at the side of the waist. Aside from that, the frilled borders of the fall of the shoulder, called the osari pota, are an integral part of the outfit. It is adorned with floral designs, religious motifs, and geometric patterns, because it is pleated and is therefore more conspicuous than the portion of the osariya that is wrapped around the waist. Today, the complete length of the material used to drape the osariya varies between five and six yards.

The osari pota is embellished to give a more elegant look to the outfit. Image courtesy pinterest.com

According to the book Costumes of Sri Lanka by K. D. G. Wimalaratne and Dian Gomes, the Indian saree was introduced in the early 20th century to Sri Lanka by the women of Moratuwa, and this style became infamously known as the ‘Moratuwa saree’. The Indian saree, as well as the osariya that had become a part of the Kandyan culture by then, became more popular because of the nationalist campaigns of Anagarika Dharmapala, who was against Sinhalese women wearing Western clothing.

The osariya is said to be a blend of two different styles of saree draping: the ohoriya and the selai styles, both which are of Tamil origin. Murals in the Hindagala and Malaagammana temples depict the oldest form of the ohoriya. These murals display that the ohori pota, the long fold which flows over one shoulder, had first been used to cover the upper body. Later on, the ohoriya was completed with a tight-fitting jacket, an influence of the West.

The selai, which is the Tamil word for saree, refers to the style of saree which is popular among the Tamil women of Jaffna. It consists of the fall, or pallu, being wound around the waist and tucked into a fan-shaped frill at the back. Historically, the drape of the selai also reflected a woman’s social status. Women of lower social status wore the cloth wound around their lower body and then thrown over their upper body in a drape instead of a jacket – this was commonly known as the selai. On the other hand, women of higher social status wore a ravike, a tight-fitting short-sleeved bodice made of velvet or some other thick fabric with the selai.

In the same manner, the traditional osariya was worn mostly by women of high society in the Kandyan Kingdom, and it consisted of a jacket that completely covered the chest, midriff, and back, and a cloth ten riyans long (about 15 feet) was what was draped over the lower half of the body and thrown over the shoulder. The jacket had a round neckline and puffed sleeves, worn either long or short. The end of the pota, or fall of the saree, was influenced by the older uthurusaluwa, which was thrown over the shoulder by women before going out and about.This was customarily paired with traditional Kandyan jewellery, including Agasti jewellery, which was handmade for the Kandyan royal families and the aristocrats, and regarded as symbols of prosperity, wealth, and nobility.

The osariya is still a favourite item of clothing among many women, who opt for this style of saree to wear to work or as wedding attire, and the absence of pleats in the draping of the osariya also tends to make it more figure-flattering. Modern trends include the ‘made-up Kandyan saree’, or the ready-made osariya, in which the osariya is deconstructed and separated into four smaller pieces; namely the jacket, the shoulder drape (pota), the neriya ‒ a piece which is tied around the waist ‒ and the wraparound skirt. This makes it easier for many women to wear this saree, because much practice is needed to wear the osariya without assistance.

The osariya is a favourite among Sri Lankan brides, although the white wedding dress has become increasingly popular. The saree worn at the wedding is often made of fine materials like silk and is richly decorated with embroidery. A bride wearing a Kandyan saree is also decked out from head to waist in the traditional jewellery.

A poruwa ceremony with the bride and groom attired in Kandyan wedding clothes. Image courtesy visitslpc.com

In contrast, the everyday osariya worn more casually is usually of less expensive but more versatile fabric, such as cotton or linen. Batik print Kandyan sarees have also become popular lately, and many local fashion designers have eagerly showcased Kandyan sarees with contemporary twists at many a fashion show in Colombo and even abroad.

Even though many women, especially in the urban areas, choose to wear western clothes for formal events and for office wear, it does not mean that the osariya is ignored – or will be forgotten in the future – as a choice of clothing for women. Being the style of saree draping that is inherently unique in our part of the world, as well as the traditional attire of Sinhalese women, it is still a significant and distinct part of our culture.