“While the district of Kegalle now falls under the Sabaragamuwa province, during the olden days of the kings, Kegalle was a part of the Kandyan Kingdom. This is why even today the people of this area still widely practise Kandyan dance and the rituals that are a part of this tradition of dance,” stated Punchinilame. The dawul beraya is the drum used in accompaniment to the Sabaragamuwa dances. Image courtesy lanka.com

As Punchinilame noted, the manner in which the Sabaragamuwa dancers position themselves and move when these dances are performed is a distinct factor of this dance form. The dancers never raise their hands above their heads; instead, their arms are extended backward at an angle to their bodies. On the other hand, the mandiya is a commonly used position in this dance form, like in the Kandyan and low country dances.

According to Saman Kumarathunga, Head Lecturer of the Department of Sabaragamuwa Dance, the shanthikarma of the Sabaragamuwa dance tradition can be categorised into three groups: yak thovil, deva thovil, and graha bali yaga. Similar to the thovil shanthikarma of the low country dance form, the yak thovil are ritualistic exorcisms which are performed to ‘appease’ various demons, which have their place in the beliefs and superstitions of the folk religion of the island. 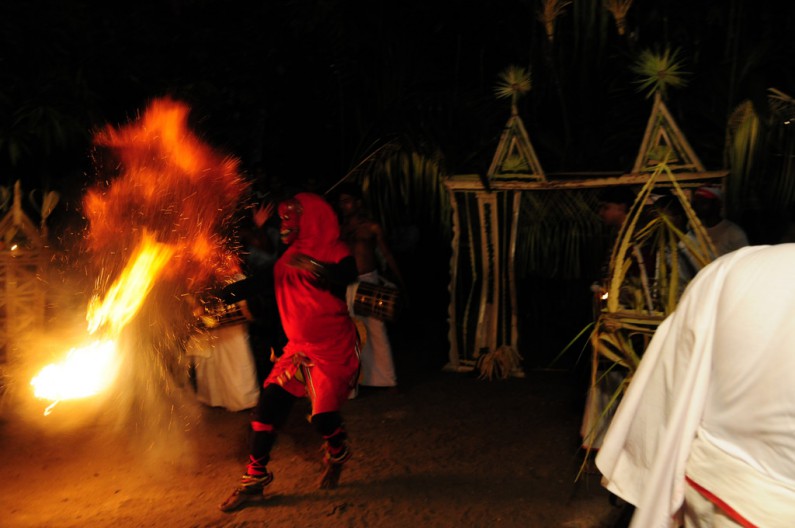 The daha ata sanniya is a ritual which does not only belong to the Ruhunu tradition of dance. It is also a part of the Sabaragamuwa tradition. Image courtesy flickr.com

The sanni yakuma or daha ata sanniya is one specific type of thovil performed in the Sabaragamuwa region, just like in the low country coastal regions which were once part of the Ruhunu Kingdom. This type of thovil is performed to appease one or more of the 18 sanni yakku which are believed to be the cause of the various diseases and health conditions. 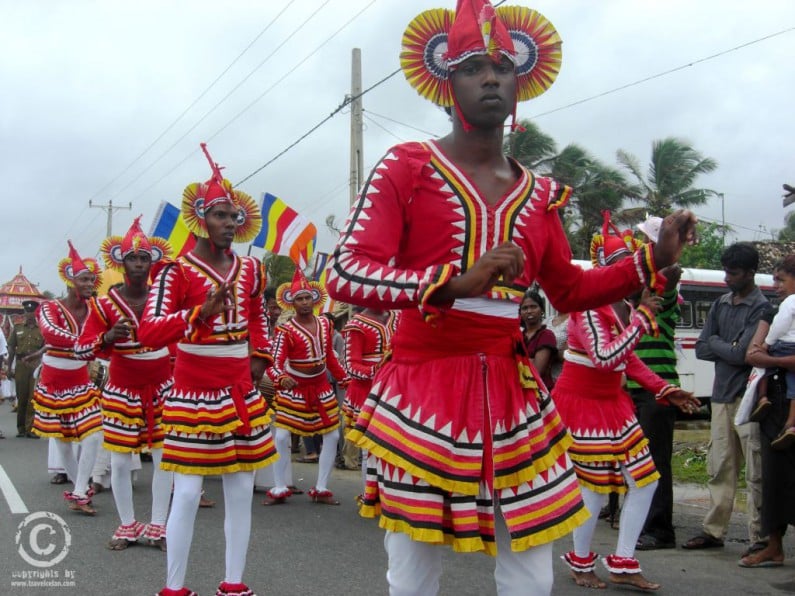 Dance processions are popular in the Kandyan and Ruhunu traditions of dance, but they originated in the Sabaragamuwa region. Image courtesy dustinjmeiries.files.wordpress.com

On the other hand, the deva thovil are shanthikarma performed to invoke the blessings of the deities of the pre-Buddhist folk religions of Sri Lanka. The gods Kataragama, Dedimunda, Vishnu, Natha, Mangara, Ishwara, and the goddess Paththini are only a few of the numerous deities which make up the pantheon of ancient gods and goddesses.

Kumarathunga noted that the oldest of these rituals are the gee maduwa and the maha mudal yadima. As historical evidence such as stone inscriptions found at various sites in this region suggest, this was practised by our early ancestors of the yaksha, raksha, and naga tribes.

“The ritualistic dance of the pahan maduwa has originated from those of the gee maduwa. Over the years, the tradition of lighting oil lamps in the maduwa, the handbuilt ceremonial structure where this ritual takes place before the performance, was introduced,” said Kumarathunga.

Right now the pahan maduwa is one of the most significant shanthikarma of the Sabaragamuwa region because it is the main ritual performed to celebrate and worship the goddess Paththini. Aside from the pahan maduwa, the kiri maduwa is another well known ceremonial deva thovil performed in this region. For centuries, this dance has been performed to bring prosperity, preserve crops, and cure diseases within the community of believers.

At present, not many people are involved with practising the Sabaragamuwa dances.  Because of this, the ritualistic dance known as the Dig Ge Natum that was performed in veneration of the god Saman is no longer practised.

The rituals of the graha bali yagha are performed to alleviate misfortune which is said to befall certain individuals when celestial bodies such as the sun, the moon and the planets of our solar system do not move in their favour. The main rituals which make up the graha bali yagha include the mal bali, thira bali, prathima bali, and the balagraha bali. The Sabaragamuwa Saman Devalaya is one of the few places where one can witness the traditional dances and rituals of this region, especially when the temple’s annual perahera takes place. Image courtesy flickr.com

The dig ge natuma was a ritualistic dance that was historically performed by the women in this region to worship the god Saman. Sadly, this dance is no longer practised, and there are no surviving dig ge natuma dancers either. The knowledge that researchers and historians have gathered about this dance so far has come from the descendants of such dancers.

“The dig ge natuma was at first performed by the king’s wives; the dig ge was actually a sort of room or gallery where songs and dances were performed by people to entertain the king. However, as time went on and the people in this region began to worship the god Saman, the dance was practised as a form of religious worship. The di ge structure was constructed in many temples of this region, such as the Dewundara Maha Devalaya and the Sabaragamu Maha Saman Devalaya,” said Kumarathunga.

Even though the number of people who practise these rituals and perform these dances has lessened over time, hopefully in future, academics and dancers will be able to gather knowledge about the methods and techniques of the Sabaragamuwa tradition of dance. In this way, rituals of the sabaragamuwa shanthikarma will be preserved for the future generation, while the practise of the dig ge natuma could possibly be revived.