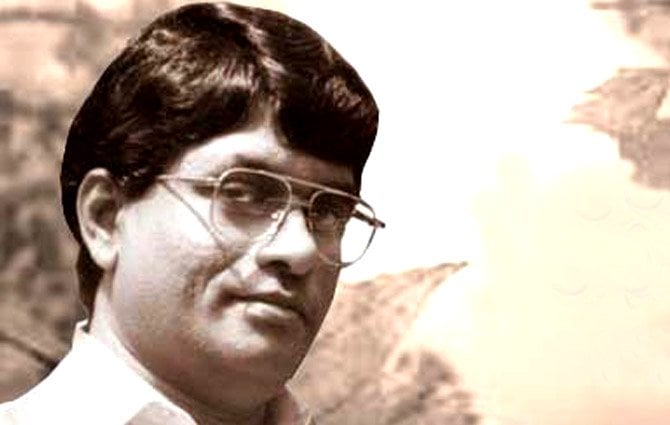 An often heard complaint about current Sinhala music is that it has no depth. This is also the justification used for why you still hear decades old tunes still playing on the airwaves to this day. A figure responsible for such songs is the prolific lyricist Rathna Sri Wijesinghe. With a prodigious command of Sinhala, history and literature he penned many moving popular songs, weaving contemporary stories with tales from history and literature to further reinforce his message. Here we look at three of his popular lyrics.

With a ‘Thilaka’ on your forehead,

Did you fly to this burning Palmyrah grove,

Carrying a heart in your beak?

Wijesinghe says this song was inspired by a story in the Siwdesa paper about a real life romance. Gunadasa Kapuge called Wijesinghe up in the middle of the night to say that he should read this story and that resulted in this song being written.

The story is about a Sinhala female police officer from the south of the country who was transferred to the Mirihana and Kirulapone police stations. Here she meets a Tamil police officer who transferred from the North. They fall in love and begin a relationship that is vehemently opposed by both families. Her parents are said to have performed last rites saying that their daughter is now dead to them.

This romance took place during the ’83 Black July riots. As a result, they leave their jobs as police officers and go to his hometown in the North where they remain throughout the war years. When this song was released in 1998, the couple in question learned that there was this song in the South about their love story. They managed to listen to it and they loved it. Their daughter even knew the words by heart, according to Wijesinghe.

The woman in this story is Vinitha Samarasinghe Gunasekara and her love was Balasingham Nadesan, who was once the head of the LTTE police and the LTTE political wing.

The Princess On The Ajaneeya Scooter

Arriving on an ‘Ajaaneeya’ scooter,

Princess where are you riding away with the speed of the wind?

With the way you held your kings shoulders and looked at the city,

I worried if your crown would fall.

According to Wijesinghe, this song was written based on two stories; one in real life, one from the Jātaka stories which are said to describe the past lives of the Buddha.

The Sirikalakanni story from the Ummagga Jātaka speaks of a man named Pinguththara who was the star pupil of the famed teacher Disapamok. The teacher was so impressed with his pupil that he wed his daughter, who was as beautiful as a goddess, to Pinguththara. But Pinguththara did not like her. On an instance where his wife climbed a tree to pluck fruit, Pinguththara lay thorns at the foot of the tree and ran off leaving his wife behind. She was rescued by King Vedeha who took her as his bride. Since the species of tree she was found on was called Udumbaraa, she was known as Lady Udumbaraa.

Some time later, as the King and the Lady were travelling, in their procession she spies a farmer working in a field and laughs. When the king asks why, she says that it is her former husband.

In a similar manner, a well educated youth known to Wijesinghe was forced to work on the road as a labourer. While he was doing so, he witnessed his former university girlfriend riding by on a trail motorcycle, the Ajaneeya scooter in the lyrics, with her new partner. Here Ajaneeya refers to the mythical Ajaneeya horse from Indian folklore which was renowned for its intelligence and speed. In a later verse, romance is likened to the rare Udumbaraa flower which is a callback to the Jātaka tale.

The combination of these two stories was the origin for this song.

The Story Of Shanthini

Shanthini, the saffron on your forehead is being washed away

From the tears of the moon in the sky.

The altar for the gods is on fire, do you see the see the smoke?

This song is from the point of view of a young man who is trying to take Shanthini, his love, away with him but they face discrimination because he is Sinhala and she is Tamil. Set during the racial riots of the 80’s, the song says how even the moon is in tears because of the violence in the country. He implores his and her people to “take” the race, caste and culture from their relationship if they are so valuable to them, and just give him Shanthini. Because she is all that he wants, and to open the Thirukkural book and take its advice to heart.Wijesinghe says the song was inspired by an acquaintance of his named Shanthini, who met while he was visiting a friend in Mannar while he was a teenager. While they struck a great friendship, perhaps even approaching romance, they didn’t even speak each other’s languages. Years later, when the country was in turmoil, Wijesinghe wonders what happened to his friend, which led him to write this song.