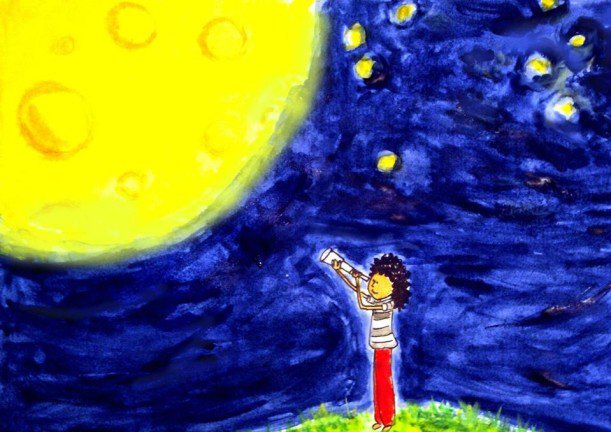 Irushi Tennekoon’s illustrations are for children; or for the child at heart. They are playful, of bright luminous colours, and have the potential to whisk you off your feet and into a magical world of riding rainbows on a bicycle and swimming in the deep ocean with a blue whale.

Drawing inspiration from artists such as Quentin Blake and Sri Lanka’s Sybil Wettasinghe, her illustrations are sketchy and have a hand-drawn style. “I think my passion for drawing has stemmed from my love for children’s literature. Even now, I’d prefer reading Alice’s Adventures in Wonderland or Winnie the Pooh or a story by Roald Dahl. I’ve been influenced by so many artists and writers, inspiration is everywhere; you just need to look in the right places” explains Irushi.

While Quentin Blake and Sybil Wettasinghe are her core muses, she hasn’t restricted her style.  Learning from comic book and illustrators such as Beatrix Potter and Lemony Snicket, Irushi developed her own style. “Whatever I read about or hear in the real world is instantly sketched in my mind. I guess it’s all this and years of doodling that has formed into somewhat of a style of drawing now”, elaborates the young English lecturer at a university.

Irushi never dreamed she would be an illustrator though her love for drawing was evident even as a toddler. “I’ve been doodling ever since I can remember. My mum says my baby doodles used to be really expressive egg shaped people or animals, with stick hands and legs”, she shares.

In the generation of social media, it’s no surprise that Irushi rocketed as an illustrator when she created a Facebook page two years ago, and her illustrations reached many who spotted her talent and encouraged her. Little did she know that the Facebook page she created just for kicks, for sharing her own comic and stories, would lead to her illustrating children’s books, and being an illustrator for the World Conference on Youth last year.

“I never imagined it would turn me into a freelance illustrator, never dreamed that it would bring me this far. It’s not my full time job, I’m an English lecturer by day and the illustrating is done when I get home late evening. Life is at a perfect balance right now with these two”.

A customised gift for a friend

“Most of my work is for personalised gifts, but I have done a couple of larger projects for some companies in Colombo” says Irushi when asked about her work to date. Her work was displayed at a commercial exhibition a few years back and she hopes to roll out another exhibition later this year (something to look out for). “I illustrated a children’s book for a completely noncommercial cause to help raise funds to educate kids in the North. The book was written by a friend of mine and was self-published in 2013”.

Irushi also had a series of Christmas cards, t-shirts and printed mugs up for grabs in December as well. Follow this link to Irushi’s Facebook page, and have a peek at her fun, magical world of doodles.