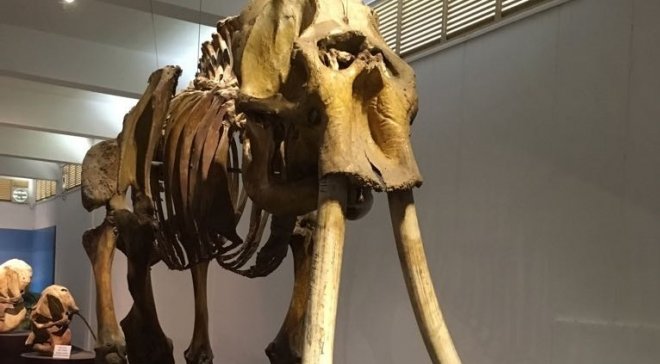 Of Skeletons And Skins: Meet Sri Lanka’s Only Female Taxidermist

Walking into the taxidermy division of the Colombo National Museum is both fascinating and unnerving at the same time. A leopard snarls in greeting just inside the door, elephant skulls line the small aisle ahead. A pair of giant squirrels perch on a stand, nibbling fruits in tableau, redolent of a life perhaps spent leaping branches in a forest. Just outside taxidermist’s office, a giant tortoise grandly stands sentinel.

When you speak of taxidermy, the first image that jumps to mind is probably that of a crazy recluse in a house full of sad stuffed animals, or a gun-toting maniac who relishes shooting deer to mount on his wall. However, that is far from the truth of what ethical taxidermy is actually like (we have clearly been reading and watching too many horror stories), and the taxidermist we met is anything but a trigger-happy recluse. Meet Chamalka Kothalawala, the only woman taxidermist to serve under the Department of National Museums, and possibly the only female taxidermist attached to a national museum in South and Southeast Asia.

Chamalka Kothalawala is the only female taxidermist in Sri Lanka, and possibly South and Southeast asia as well

Kothalawala has been serving under the Department of National Museums for the past twenty six years. She started off as an assistant to her predecessor and worked her way to the top, finally stepping in to fill his position on his retirement. As far as she knows, while there are plenty of female taxidermists in the West, she is the only one to hold this position in South and Southeast Asia.

“Taxidermy is a kind of art,” Kothalawala tell us. “But then there is also a lot of science involved. It doesn’t just mean stuffing animals. It is actually a very difficult job.”

Frozen in time; ethically done, taxidermy can act as a window into the world of wildlife and a means of preserving our natural history—all without harming a living creature. Image courtesy: africahunting.com

The word taxidermy originated from the Greek words taxis, which means arrangement, and derma which means skins. Basically, taxidermy is the art of preparing, stuffing and mounting animal skins for purposes of display or study. Sounds gruesome? It probably is, if you are going about it by shooting a buffalo just so you can have its head on your wall. However, taxidermy has long been instrumental in conservation and education, and Kothalawala only works on specimens which are already dead, mostly for the purpose of educating the public on wildlife and natural history.

When we ask her to tell us about the process of taxidermy, she laughs, “We don’t tell anyone about the processes we use. It’s a secret.” Apparently details of the procedures involved are kept under wraps because there is a chance that people could use that knowledge for unsavoury purposes. “In Western countries, taxidermy is a commercial job,” says Kothalawala. “However, in this country, there are no private taxidermists as far as we know. We don’t encourage it because knowing Sri Lankans, people will probably start killing the animals to get them stuffed. We want to help conserve wildlife, not the other way around.”

So, how does one go about becoming a taxidermist?

No, there is no such thing as a taxidermy degree. Education wise, Kothalawala has a background in science, but her knowledge of taxidermy was acquired through on-the-job training, practice, the odd online course here and there, and the gradual accumulation of experience over the years. “You can’t exactly teach taxidermy,” Kothalawala tells us. “There is no ‘taxidermy school’ or anything like that. Only the chemical part of it can actually be taught. This is the kind of art which you mostly learn by yourself through experience. For instance, no one can teach you how to get the shape of the animal you are working on. It is something you have to do by yourself.”

Taxidermy is the meeting ground between science and art, and is much more than simply stuffing an animal pelt like some furry stuffed toy. It requires knowledge in sciences like anatomy, physiology and chemistry, as well as the eye and hands of an artist. Image courtesy: ipinimg.com

Did she ever find it unnerving to work with dead creatures? Kothalawala admits that she did. “When I first started, I was really scared of all the blood and skin and guts,” she laughs. “It is very difficult to get used to that.” Today, she has a team which takes care of fleshing and removing skins, while she only works on the chemical aspect of the process. The specimens are mostly obtained by collectors who scout around for potential subjects—dead ones, just to be clear—or by donors donating the bodies of animals they owned.

Kothalawala has worked on a diverse number of specimens that range from smaller creatures like birds and dogs, to massive ones like elephants. In fact, one of the most challenging projects she had ever engaged in was the relocation of the skeleton of the blue whale from the Colombo National Museum to the Osteology Gallery of the Natural History Museum, which was opened to the public in 2017.

Still magnificent; spanning an entire room, the majestic skeleton of the blue whale can take your breath away. It washed ashore in Ambalangoda in the year 1894, and is nearly sixty-five feet long. Image credits Radhia Rameez

“Osteology is another branch of taxidermy,” she explains. “We do work with skeletons as well. It took us one and a half years to move the whale specimen.” The display she speaks of has always been one of the most popular attractions of the museum, a gigantic skeletal structure suspended from above and spanning an entire section in its new home in the Osteology Gallery.

Heiyantuduwa Raja is another iconic osteology exhibit on which Kothalawala had worked. The magnificent tusker carried the Relic of the Tooth in the Dalada Perahara for eleven years before it died in 2002. In spite of being offered a hefty sum of money for it by a Japanese company, its owner Henry Gunesekara donated the body to the Colombo National Museum where it is memorialized as a national icon.

Years ago, Heiyantuduwa Raja proudly bore the sacred Tooth Relic in the Kandy peraheras. Now he stands in the Natural History Museum, his tale kept alive for generations to come. Credits Radhia Rameez

Kothalawala has worked on two other tuskers as well; Maligawa Raja, who stands proudly in the Dalada Maligawa premises, and Millangoda Raja, who was once considered the longest tusked elephant in Asia and is now on display in a museum Kegalle.

“In the case of large animals, if we use the skin to stuff and mount it, its skeleton cannot be separately used for osteology purposes,” she adds. “This is because we use the skull for the stuffing. For smaller animal, it is possible to get a model, but it is difficult to do that for larger ones.”

The taxidermied horse at the Police College in Katukurunda. Credits: Chamalka Kothalawala

For a large animal like an elephant, it can take up to seven whole days to remove the skin. Chemicals are continuously applied to preserve it while it is being separated from the flesh. Smaller specimens like dogs, or even leopards, are much easier to work with, and the skin can be removed within a day’s time. “If you find an animal which needs to be preserved, we will need to start work on it twelve hours after the animal’s death,” she explains. “Actually, we will be able to manage even if it is twenty four hours, but most of the time, the specimen’s fur begins to fall off after twelve hours have passed.”

Other animals she has taxidermied includes a whale for the Galle Maritime Museum, two dugongs for NARA (National Aquatic Resources Research and Development Agency), a horse for the Police College in Katukurunda, some lions for the army camp in Ambepussa, and countless others like leopards, sambhur, giant squirrels and deer. She has even worked on pet animals like dogs, mostly when owners reach out to her with requests to preserve a beloved pet after it has passed on.

The dioramas and displays in our Natural History Museum would not be around today if the art of taxidermy had never been developed. While there are many people who simply consider it as a means to get a fancy elk head mounted on their wall, it has been instrumental as a scientific and educational tool without wilfully harming any living creature.