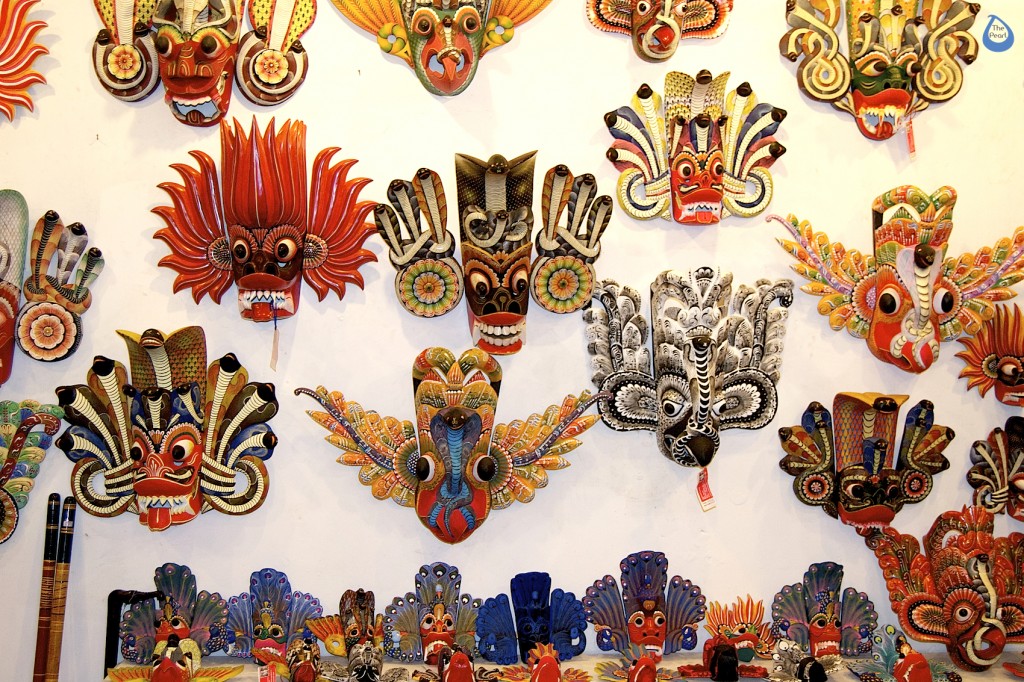 Kandyan dances may steal the spotlight on many occasions, but Low Country dances (pahatha rata natum) that date back to the days of the Ruhunu Kingdom are performances that are unique in their own right. A few people in the Southern Province of Sri Lanka still practice many of these ritualistic dances, and it is not out of the ordinary to hear about them taking place in certain areas of the Western Province either. The use of masks is one of the distinct features of Low Country dances. Image courtesy irishtimes.com

The book Dances of Sri Lanka, written by W.B. Makulloluwa, states that the Low Country dance form is known as such because the important schools of this dance form were historically located in the low-lying coastal areas of the Western and Southern Provinces. This form of dance was also known as Ruhunu Dance, as the areas of the present Western and Southern Provinces made up a greater part of the ancient Ruhunu Kingdom of Sri Lanka.

Dances of Sri Lanka states that Low Country dances are very different from Kandyan dance—the only similarity being the basic mandiya pose of knees half bent and spread outward, and arms bent at the elbows in line with the chest. These dances are very ritualistic, and the use of masks is prevalent through all of them. The gammaduwa harvest ritual is one of the many shanthikarma performed in the regions of the Western and Southern Provinces. Image courtesy hindustantimes.com Dances in Sri Lanka states that of the thovil shanthikarma, the daha ata sanniya is the most famous. These are exorcist ritual performances, and each sanni depicts an incurable disease or ailment, and a different mask is worn by the dancers to represent each one. According to beliefs found in the Pre-Buddhist folk religion of Sri Lanka, these ailments are said to be the work of sanni yakku (devils) and can only be healed by invoking the devil responsible for each ailment and appeasing it with offerings. The different masks of the daha ata sanniya are carved out of wood and depict the craftsman’s visual conception of each ailment. For example, kana sanniya (blindness) is represented by a mask that has an expressionless face with vacant eyes. The many different masks used in the Kolam dances. Image courtesy news.lk

Kolam are masked ritualistic dances too, but they differ from the shanthikarma, mainly because they are more theatric than the other ritualistic dances. Traditionally, kolam were rituals performed to mitigate issues that arise with pregnancy. Cravings and desires (dola duka) that occur during a pregnancy used to be viewed with great suspicion, as people believed that these were caused by some sort of supernatural possession. Therefore, the masked kolam dances were performed to solve these issues and protect the foetus. Nowadays, the kolam are rarely practised, and on the few occasions they are performed, it is mainly because of the theatrical aspect of the dances and the masks, as opposed to their traditional ritualistic aspects. It is often ordinary folk who perform kolam these days, and not the edura (shaman) or trained ritual dancers. The expense generated by these elaborate and lengthy kolam dances have resulted in shorter performances, with fewer dancers participating.

The Dying Dances Of the Low Country The dances of the Low Country are gradually losing their importance as ritualistic dances. Image courtesy miracleofasia.lk

It is unfortunate to note that many of these Low Country dances are not as important or popular as they once were. For both aesthetic and ritualistic purposes, Kandyan dance has become increasingly popular in the Western and Southern provinces. As a result, the number of people who practise and teach the pahatha rata natum has declined over the years.

Many private institutions and dance academies opt to teach Kandyan dancing as an aesthetic dance, and very few institutions in the country have taken up the initiative to teach the traditions of Low Country Dance. The University of Visual and Performing Arts in Colombo is one such place.

Mahinda Wimalasiri, the Head Lecturer of the Department of History and Theory of Dancing, says it is the only university in Sri Lanka which exclusively offers special degree programmes in performing arts.

He also said that the students at the university are encouraged to learn and perform all three traditions of dance. There are three respective departments for Kandyan, Low Country and Sabaragamuwa dance, and another department that is dedicated to the History and Theory of Dancing. This ensures that students are well trained in dance traditions.

“Our students are also trained to choreograph their dance movements, play various instruments—including the drums–and also look into their costumes, and they are given the opportunities to organise and choreograph their own concerts and dance recitals,” added Mahinda.

More institutions, both public and private, need to come forward to encourage students and teachers to promote and preserve the theories and methods of Low Country dances. If not, future Sri Lankans may not be able to witness the beauty of these unique dances.

* Dances of Sri Lanka by W. B. Makulloluwa (1978). Department of Cultural Affairs