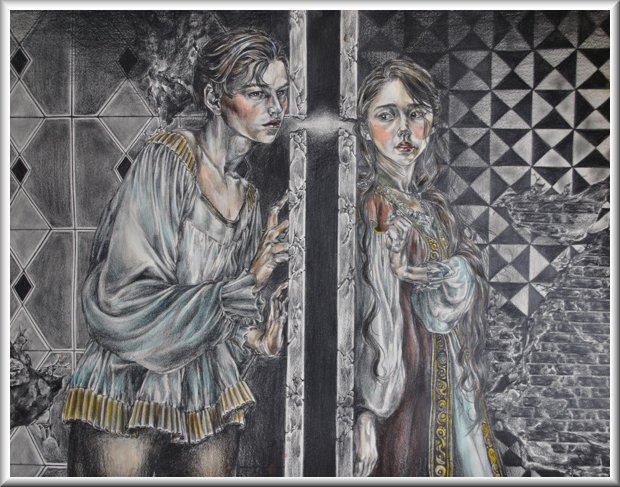 We have to admit, we didn’t quite know what to expect when we went to watch Pyramus and Thisbe , on November 19 at the Lionel Wendt. We were definitely excited at the prospect of a Sri Lankanised A Mid-summer Night’s Dream that would make Shakespeare comprehensible for local audiences – however the question is, did they succeed?

Good old Shakespeare has seen a decline in popularity over the years. No one, it would seem, has time for his “thou”s and “thee”s and “wherefore”s and some university syllabi have even neatly trimmed their offerings of Shakespeare, because, it would appear, he is no longer relevant. It would seem that the modern audience cannot grapple with the complexity and length of Shakespeare’s dialogues and his wit may even be outdated (before Shakespeare fans burn this writer at the stake, please note that these are not her views). We want action and comedy but, most of all, we want something relatable. How is Polonius relevant to your average Sri Lankan? (He’s a nosy uncle, that’s how) Why would anyone in Sri Lanka be amused by Richard III’s manipulation? (Not too far off from our own politicians)

These are valid questions but it does not mean that Shakespeare is any less important. The response, instead, has been to transform Shakespeare’s plays into something our modern audiences can digest. Anyone who has watched BBC’s Hamlet (2009), featuring David Tennant and Patrick Stewart would agree. Shakespeare has been twisted, tweaked and transformed time and again, and this is exactly what Jehan Aloysius attempts with his Sri Lankanised rendition of A Mid-Summer Night’s Dream. The play was not, however, a full-length Mid-Summer and featured only the fairies and acting troupe but left out the Athenian lovers entirely.

The play opens with Peter Quince acting the part of a typical Sri Lankan auntie/uncle (we feel the ambiguity was deliberate as Peter Quince later develops as homosexual). We like how he breaks the fourth wall by directly talking to the audience and even earning smatterings of laughter. On the whole, it should be noted that the naatya-style was very well done and received. Here is a Peter Quince we can all understand because he is so undeniably Sri Lankan, almost like a gay andare.

The play then loses its coherence when the real action begins. The fairies come onstage and what happens next is unclear. Interpretive fight-dance sequences, some impressive but slightly wooden acrobatics – had this been someone’s first dose of A Mid-Summer Night’s Dream, they would definitely have been lost in the tangled webs of fairy politics. The fact that the play is adapted from A Mid-Summer Night’s Dream, and therefore doesn’t follow the same logical flow might be the reason as to why there was confusion to begin with (for instance, the wedding celebration of Theseus and Hippolyta, at which Peter Quince’s play will be performed, was left out).  The premise for Peter Quince staging the play was lost. Additionally, according to the original play, Oberon and Titania are estranged over an Indian changeling. This particular version made it look a bit like infidelity, although the dialogue did say that Titania had promised the Prince’s mother that she would take care of him. There was a hint of infidelity and confused sexuality because Titania clearly sat on the Prince’s lap in a rather sexually charged move. This creates a certain amount of confusion, questioning the premise of Titania’s “punishment”. Even if the director did not intend to allude to adultery, there was no background, no exposition whatsoever, that would familiarise the audience to fairy politics.

We commend the effort to Sri Lankanise the fairies – they were attired as traditional Sri Lankan dancers – but there was no willing suspension of disbelief on the part of this writer. They simply weren’t digestible, and there was no attempt to familiarise the audience with the concept of Sri Lankan fairies at all.

The thing with A Mid-Summer Night’s Dream is that it presents two realms: the mortal and the fantastical. Going by the costumes and the grandeur of the fairies, we obviously picked up on the idea of disparate realms, but apart from costume, attempts to make these fairies appear Sri Lankan didn’t sit too well. Perhaps because the audience is required to accept these two disparate realms, the localisation of the fairies becomes too much to digest. Apart from the costumes, it would seem, there was nothing else about these fairies that would make them “Sri Lankan.”

This, we feel, ultimately undermined the entire fairy narrative. In addition, we weren’t very happy with the presentation of fairies. We didn’t feel there was much thought or attention given to the fairies. They didn’t really stand out as individuals – not even Puck. Titania was almost forgettable, for that matter, and this particular reading of Oberon did little justice. The power, majesty and even intelligence of Oberon was merely substituted by brawn while Titania was two dimensional. Puck, who ought to have been the life and soul of the play, had absolutely nothing about him that would make him stand out from the rest of the fairies, apart from extra stage time.

Additionally, the fight-dance sequences were far too long and all the fairies seemed to do was dance at the drop of the hat. It came to a point where it resembled a Bollywood movie, which was honestly annoying at certain moments. In addition, we weren’t quite sure that the contrast in diction between the mortals and the fairies did anything to add to the play.

Then there was the troupe of actors, led by Peter Quince and featuring the infamous Nick Bottom. They were funny, but crudely so. They wasted no time familiarising themselves with the audience by often throwing in a Sri Lankanism like “yako”, much to the amusement of the audience. We liked the fact that it was bilingual in certain parts and the characters were very kopi kadey-esque, and thus, instantly relatable. The characters drew from typical Sri Lankan archetypes but the thing is, apart from Pyramus and Peter Quince, none of the other actors really stood out in the group as individuals.

Definitely enjoyable if your brand of humour is slapstick. The jokes and references were often crude – not a family drama for sure – and there were plenty of Sri Lankan imprecations peppering the dialogues. It did, however, make the audience laugh. There were certain parts of the play that were really enjoyable (for instance, when the play-within-a-play was finally acted out), even if your cuppa is subtle humour and this was anything but. It was ribald but it did have its moments.

What we weren’t so sure of was the homo-eroticism. We have no issue whatsoever with the homoerotic undertones of the play – hardly undertones, more like overtones. We just weren’t sure what the purpose of it was. Were they trying to make a point or were they making fun of homosexuality or were they trying to say that homosexual characters are funny? The point of it did not come through, if, indeed, they were trying to make a point.

The play featured no scene changes, but the backdrop was well done. We thought it managed to recreate a forest scene minimally and effectively (just one large tree with vines) and the lighting, more or less, helped enhance the feeling of forest-like enchantment. Except for one light, to the left of the tree, that blinded the audience at certain points (audience’s left. We noticed several people trying to block out the light with their hands), we have no complaints with the backdrop and the lights. As the stage at Lionel Wendt has more depth than width, however, when Titania’s bower was transported to the stage, it looked a little overcrowded on the right hand side of the stage (the audience’s right).

The effort taken to give the music a local touch must be commended, although the soundtrack of the fairies was overplayed and ceased to provide any additional effect to the scene after a certain point. We didn’t notice any major problems with the sound, except that the fairies could have projected better (it still wasn’t clear, towards the end of the play, despite all the action, why Oberon and Titania fought in the first place).

We also loved the “pite scene” and the hilarious slow motion action but not so much the interpretive fight-dance scene of the fairies.

While the play may not have succeeded in following a coherent narrative (this is, after all, Shakespeare, not Beckett or Pinter), it fused several local elements in really well. We saw a bit of kolam, thovil and traditional drumming… and even drunk Sri Lankan uncles. The fusion, where the troupe of actors is concerned, was seamless and enjoyable.

The real gem of the play was its ability to constantly break the fourth wall. For that matter, half-way through the play, the actors descended from the stage and pulled  several male audience members up on stage, demanding that they audition as Pyramus. This ensured that the play was continually engaging on many levels and made the audience feel even more a part of the action.

We weren’t sure what the play was trying to say, if it was trying to say anything at all. The hilarity and ridiculous action on stage kept escalating, forcing the audience to sit tight and laugh until it hurt – but it didn’t say anything and, we suppose, it didn’t have a point beyond entertainment and comedy. Not a play you would want to bring children to, but definitely something worth watching if all you want is a laugh.

Jehan Aloysius and co. will also be representing Sri Lanka at the Bharat Rang Mahotsav International Theater Festival in India in 2016, so we’d also like to wish the troupe good luck on their Indian stage adventures.