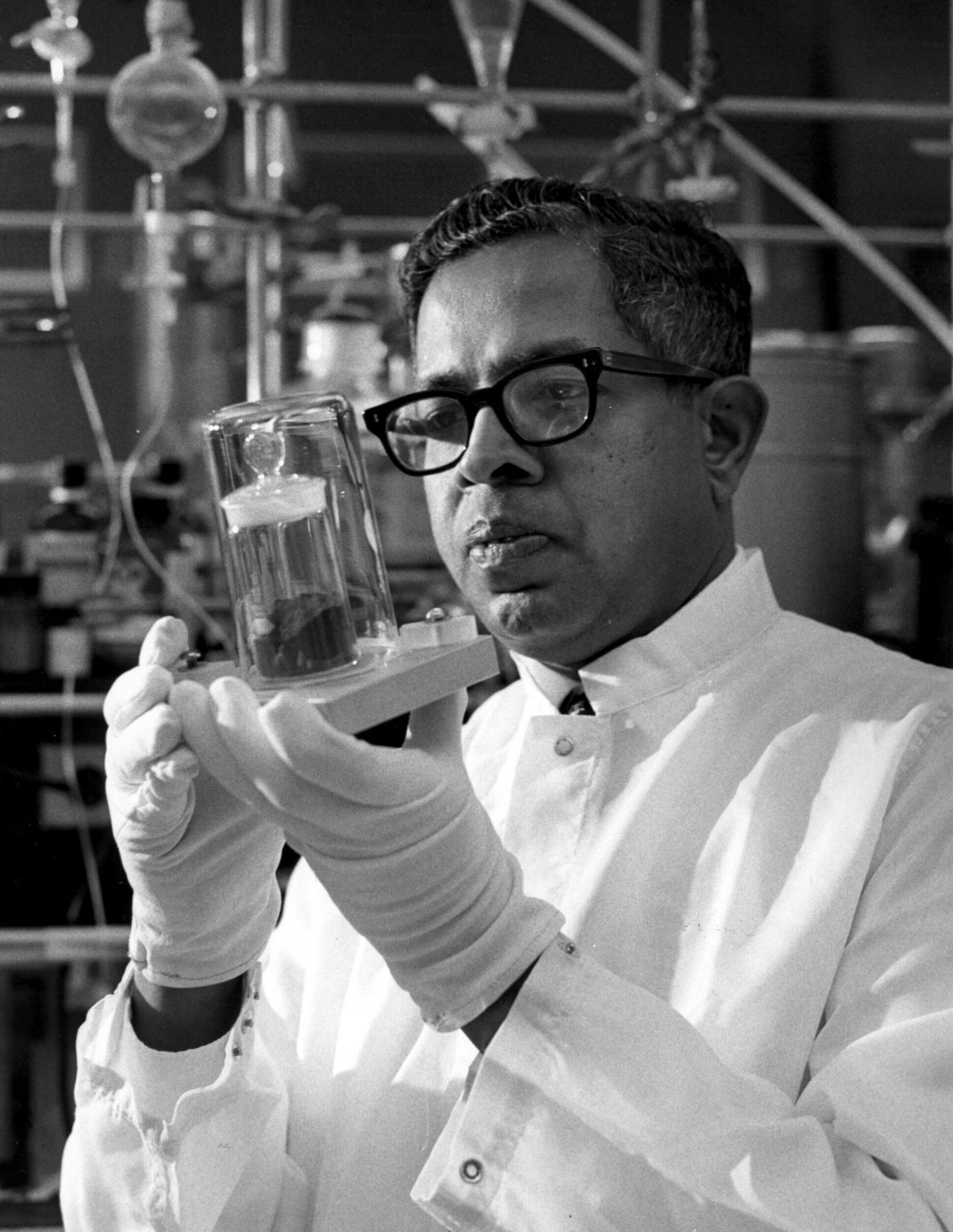 Many of us are well aware of Newton, Einstein, Curie and Hawking, and their contributions to science. But how much do we know about the eminent scientists that Sri Lanka has produced?

Most recently, a Sri Lankan scientist at Harvard University, Dr. Ranga Dias, and his colleague, Dr. Isaac Silvera, made headlines when they created metallic hydrogen, in what has been called a ‘breakthrough in physics’. A year ago, another Sri Lankan, Dr. Nipuni Palliyaguru, was part of the team that succeeded in detecting gravitational waves, confirming renowned physicist Albert Einstein’s century-old theory of General Relativity.

Sri Lankans have, in fact, been making contributions to science for many, many years. Here, we take a look at some of the more well-renowned Sri Lankan intellectuals who have made their mark on the world of science, and made this country proud. Born on January 20, 1939, Prof. Wickramasinghe is a Sri Lankan born British mathematician, astronomer, and astrobiologist, famous for his assertion that “Life did not start here on Earth but in space” through his renowned theory of panspermia.

In 1974, Prof. Wickramasinghe proposed the hypothesis that some dust in interstellar space is largely organic. The Hoyle-Wickramasinghe model of Panspermia, the belief that life on Earth is, at least in part, of extraterrestrial (outer earth and its atmosphere) origin, is one of his greatest achievements. Red rain in Kerala and meteorites fallen at Polonnaruwa were used as evidence to prove their model. His research interests include the interstellar medium, infrared astronomy, the light scattering theory, applications of solid-state physics to astronomy, the early solar system, comets, astrochemistry, the origin of life, and astrobiology. Prof. Wickramasinghe has written more than 30 books about astrophysics and related topics, and he has made appearances on radio, television, and film. He also writes online blogs and articles. He has been awarded six honours and awards including the Vidya Jyothi and the  Commonwealth Scholar. Check out his website here. Dr. Ponnamperuma is known for his work in the fields of chemical evolution and the origin of life. Image courtesy: nalakagunawardene.com

Dr. Ponnamperuma is an eminent theoretician who worked in the fields of chemical evolution and the origin of life. Born on October 16, 1923, he completed his school education from St. Aloysius College,  Galle, and St. Joseph’s College, Colombo, and obtained his BA in Philosophy from University of Madras. After moving to the United Kingdom, he completed his BSc in Chemistry from the Birkbeck University of London. Meanwhile, he received the chance to research with a pioneering scientist, Prof. Bernal, on the origin of life. After obtaining his doctorate in Chemistry from University of California, Berkeley, Dr. Ponnamperuma was honoured with a National Academy of Science resident associateship with NASA at Ames Research Center.

In 1963, he joined NASA’s Exobiology Division and took over the helm of the Chemical Evolution Division. He was selected as the principal investigator for analysis of lunar soil brought to earth by Project Apollo. He was also closely involved with NASA in the Viking and Voyager programmes, and was offered memberships in both the Space Science Advisory Council and the Life Sciences Advisory Council of NASA.

Most notable among all his outstanding achievements and honours, is perhaps the Alexander Oparin Gold Medal for the ‘Best Sustained Programme’ on the origin of life awarded by the International Society for the study of the origin of life in 1980. He was awarded the Vidya Jyothi by the late President R. Premadasa in 1990, and he worked as the science adviser to the late President J.R. Jayawardena. After his excellent service of many years, Dr. Ponnamperuma died after suffering a heart attack at the Laboratory of Chemical Evolution in University of Maryland, USA, on December 20, 1994. Dr. Gunapala is highly recognised for his work in photonics based on infrared light. Image courtesy: wikipedia.org

Dr. Gunapala is a research scientist who is highly recognised for his work in photonics based on infrared light. Originally from Yatiyantota in Kegalle, he received his school education from Nalanda College, Colombo, obtained his BSc in Physics from the University of Colombo, and obtained his MSc and PhD in Physics from the University of Pittsburgh. Dr. Gunapala currently works as a solid-state physicist, senior research scientist, and group supervisor of the Infrared Photonics Group at the Jet Propulsion Laboratory of NASA.

His work mainly includes Quantum Well Infrared Photo Detecting and he has served as Director of the Center for Infrared Photodetectors at NASA’s Jet Propulsion Laboratory since 1992. He was also a member of the Technical Staff, AT&T Bell Laboratories, New Jersey, and a research associate of Bell Communication Research. Dr. Gunapala’s long list of awards and honours consists of the NASA Outstanding Leadership Medal 2014, the Nalanda Keerthi Sri Award 2007, several NASA Space Act Awards and the NASA Exceptional Engineering Achievement Medal. Dr. Deraniyagala was a zoologist, palaeontologist, and an artist. Image courtesy: sirimunasiha.wordpress.com

Born in 1900 in Colombo, Dr. P. E. P. Deraniyagala was a zoologist, palaeontologist, and also an artist. He earned his BA and MA from the University of Cambridge, and obtained another MA from Harvard University in 1924. Dr. Deraniyagala specialised in fauna and human fossils of the Indian subcontinent. From 1939 to 1963 he was the Director of the National Museum of Ceylon, and from 1961 to 1964 he was the Dean of the Faculty of Arts at the Vidyodaya University. Prof. Chandima Gomes is a globally recognised physicist for his contribution to lightning protection technology. Born on September 12, 1966, he is an alumnus of Royal College Colombo and the University of Colombo, where he obtained his first class honours degree in Physics. Soon after, Prof. Gomes lectured at the same university, and then started a joint PhD programme at Uppsala University, Sweden. There, he conducted research in fields such as lightning physics, high voltage engineering, and discharge physics under the supervision of Prof. Vernon Cooray. For 10 years he had been a senior academic and a researcher at the University of Colombo, and was involved in promoting lightning safety and protection in the South Asian region.

After shifting to Malaysia as a Professor of electrical engineering, where he contributed in establishing the Centre for Electromagnetic and Lightning Protection, he became the first head of that institute. He spread his work to the African region and established a centre which was dedicated to research, education, awareness, and training on lightning-related engineering and physics. One of his most remarkable achievements was explaining the lightning protection technology of ancient Sri Lankan Buddhist monuments (called ‘stupas’) after ten years of research. Dr. Gomes’s professions include chartered engineer and chartered physicist registered in the UK, and also an engineering consultant and trainer in lightning protection, grounding and bonding, electromagnetic interference and research methodology. He now lives in Malaysia. Last but not least, Prof. Munasinghe is the first Sri Lankan to win a Nobel Prize. He is a physicist, an academic, and an economist who was a Vice-Chair of the Intergovernmental Panel on Climate Change (IPCC) that shared the Nobel Peace Prize in 2007. He completed his school education from Royal College, Colombo, and obtained his BA honours in Engineering in 1967 and later his Masters degree from the University of Cambridge, UK.

He has helped in formulating and implementing the national energy strategy and computer policy in Sri Lanka as a senior adviser of Energy and Information Technology from 1982-1987, and he was the founding chairman of the Computer and Information Technology Council. From 1990 to 1992, Prof. Munasinghe was Advisor to the US President’s Council on Environmental Quality (PCEQ).

Until 2002, he was a Senior Manager/Advisor at the World Bank. Though this versatile individual’s achievements will fill many pages, some of his long-listed awards and honours are the Sarvodaya Award for Humanity, Peace and Development (2007), the Eminence in Engineering Award (2014), the Outstanding Lifetime Achievement Award (2003) and the Zayed International Prize for Environment (2006). Presently, he is the founding Chairman of the Munasinghe Institute for Development (MIND) Colombo, distinguished guest Professor at Peking University China, and Honorary Senior Advisor to the Government of Sri Lanka. Visit his website here.

Think we missed out on someone? Let us know in the comments below.