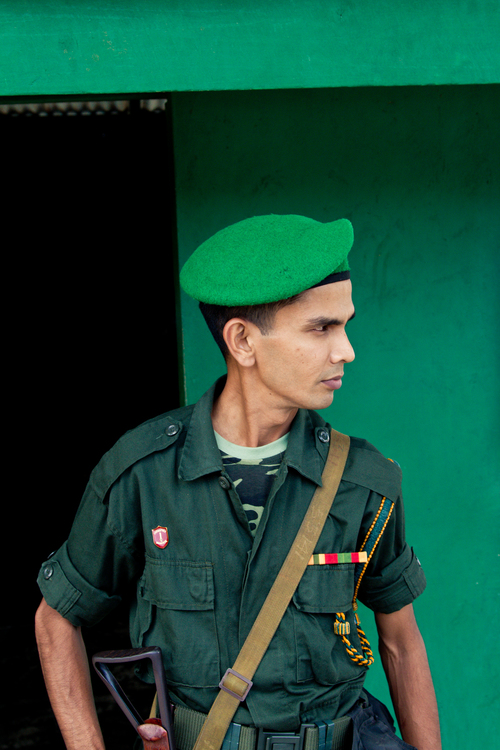 For those everyday photographs that we locals miss, Matthew Coleman’s series of Sri Lanka is a must-see!

Fisher men wading in the sea to draw in a trawler that has returned to shore with the day’s catch.

From fishermen walking into sea to draw a trawler onto the shore, to two young school boys peeking over a wall curiously, Matthew’s photographs are more about the people than the places.

That’s exactly how the 35 year old British photographer describes his photography style as. His work ‘sits between documentary, fiction and storytelling’.  He prefers to capture real moments and people, and his website elaborates ‘his images, though revealing themselves clearly as obvious realities, that remain hidden within the realms of the imagination’.

The 35 year old British photographer, captured photographs that are almost other-worldly – the colours, tones, the expression worn by the subjects, the framing, they make the images seem as though they are from a different time or different place, even for us locals. There’s almost something melancholic about most of the pictures. Undoubtedly a reflection of what he saw and felt during his time here.

His collection of photographs of Sri Lanka were captured during a six week stay on the island. In an interview with Roar.lk Matthew shares with us that his travels in Sri Lanka was in two parts, one was on vacation and the other while working on two documentary projects for the Women’s Development Center and the Shining Life Children’s Trust.

His Perspective of Sri Lanka

Not your typical portrait of a tea-plucker, beaming while surrounded by a tea bushes. Matthew captures a tired tea-plucker in a layers of coats to keep warm.

“My thoughts on the country were a lot different than if I would have spent my time out there purely on vacation, as shooting with the NGO’s gave me a different kind of perspective on the country” describes, Matthew. “From the struggles and poverty of the Tamil women and their families working in the mountains of Pupuressa, on the tea plantations, to the work that was being done with Shining Life Children’s Trust, maintaining small schools in the area in order for the children of the tea pickers to be educated. It seemed an immensely difficult life for the families, with the disproportionately small amount of money that the women earned (around USD $2 a day) doing back breaking work in tough conditions for long hours, living in tiny huts with only one bathroom between many of the people who lived there”.

Plantation worker at the virgin white tea estate in Mirissa

The other part of the Woman’s Development Center that I documented was the Haragama Crisis Centre that they ran in Kandy. Here, they provided a shelter for women and children who have been victims of sexual, physical, mental or emotional abuse (on the day that we were there the centre had a total of five mothers, thirty four young girls, and four babies, eight of which were pregnant). This all took place in 2012, when it was the largest shelter of its kind in Sri Lanka, and was also its first. There was a report at the time that revealed that a woman was raped every 90 minutes in Sri Lanka, and out of 300,000 cases, only 600 perpetrators had been remanded. It was a deeply intense experience, emotionally, to witness, though the staff who worked there were extraordinary, as they worked hard to ensure that a community spirit was kept alive, where the women and children were made to feel part of a family, as they contributed to the daily life of the centre.

Teachers lead a procession of students to Swami rock in Trincomalee

Sri Lanka, at the time I was there, was a country of many dualities, where one could still feel something thick in the air, or see something unknowable in the faces of its people. It was a place where the war, in its aftermath, seemingly still lingered like a shadow, following behind the people into uncertain times under its then president, Mahinda Rajapaksa. A portrait of a young soldier. Shades of emerald and forest green.

“But one thing was sure, that the people I met and spoke with, who opened up to me, as they did, had a special spirit.”

Perhaps this could only be forged under the struggle of which it had to go through, collectively, and that perhaps in its future there would be light at the end of a very dark tunnel.

Sri Lankan teenagers frolicking at the bay. Shot in Mirissa.

While these images and stories that Matthew has shared of Sri Lanka are bleak, he also experienced the beauty of the island as well. Speaking about his fondest memories here, he relates

“I think the fondest memories that I have of Sri Lanka is its colours, so bright and vivid as it was, bursting in every direction that one went.”

“Under the light and through the landscape the world around you on this island opens up, stretching into the horizon as its nature undulated and throbbed beneath the sun.”

Two old friends, pose for their picture in Trincomalee

“There were so many stories to take in, to breathe deep into one’s chest. Stories good and bad, right and wrong, just and unjust, but this is the nature of everything, and with it one learns and one grows and one connects with its people, however fleetingly. There were many minds we came across who gave us so much, who opened their doors and offered us what they had, even if they had so little. I was touched in so many ways, perhaps too many to realise at the time, but I left the island with an experience so rich and diverse, and for which I will hold close to my chest like a song one holds dear.”

Two young school boys look curiously at the photographer from behind a bright blue wall.

In just six weeks he had seen and captured different sides to life in Sri Lanka – from the somber moments and people, to the smiles and the fun Sri Lankan spirit that can be kept alive even after its dark moments.

The images we have shared are just a glimpse of the photographs from his collection, to see more visit his website.