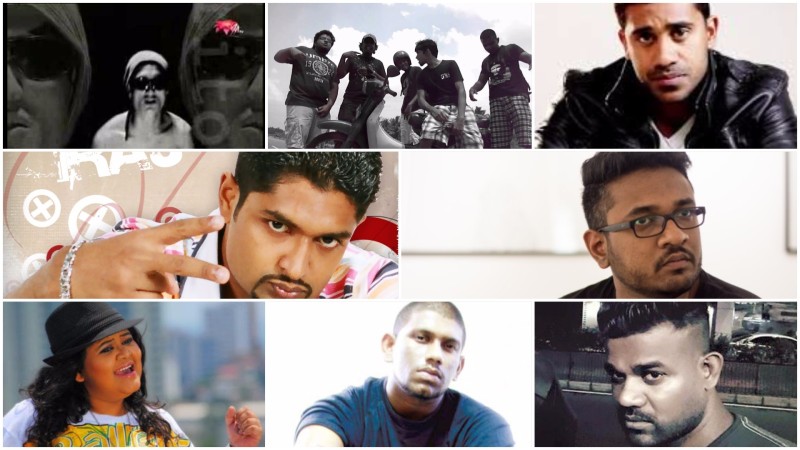 Hip hop in Sri Lanka has a relatively long and interesting history. From Rude Boy Republic’s signature “rudeboy” style in the mid ’90s and Brown Boogie Nation’s quintessentially ’90s G-funk to Iraj and his protégés’ pop braggadocio in the mid to late 2000s, and the modern, socially conscious supergroups like Drill Team and 44 Kalliya and the ongoing #selfierap phenomenon, Sri Lankan hip hop has come a long way. Much like its evolution in the US, hip hop music in our tiny island has grown from a niche to a mainstay in the local music industry in less than two decades, with a few of them even going international. Roar decided to take a look at some of the more influential Sri Lankan rappers, both old and new, and their contributions to one of the most marketable (and often critically acclaimed) genres in the history of music.

The ones that started it all. While it’s impossible to verify whether or not they were the first true Sri Lankan rappers it was RBR and BBN that set the stage for things to come. Their signature sound as mentioned above was what inspired a generation of young Sri Lankan MCs to hit the studio. The two group’s influence can be seen in all facets of the local hip hop scene. RBR emerged at a time when there were no producers who knew how to make beats. According to founder-member Asif Ansar, the trio (he, Ruki and Shiraz) started “gigging at old school live concerts in the middle during breaks between bands.” They produced and wrote everything themselves. People had never seen or heard original Sri Lankan hip hop until then. BBN’s G-funk influenced style was also a new experience to Sri Lankan audiences. The group’s breakaway star Randheer Withana, together with pop idols Bathiya and Santhush, went on to revolutionise the music industry and continue to dominate the charts today. (BBN have sort of been making a comeback, to the delight of many). You can listen to original BBN and RBR tracks (among others) on the Colombo Tribe Project Vol. 1 available in its entirety for streaming on SoundCloud.

Whatever your personal feelings about Iraj Weeraratne, his politics and/or his music, you can’t deny that his work has had a tremendous impact on Sri Lankan popular music in general and hip hop in particular. It’s really not a stretch to call him Sri Lanka’s Dr. Dre. Iraj was single handedly responsible for introducing a plethora of talented artists to mainstream audiences that might not otherwise have discovered them. Rappers like Killer Bee, Krishan, Bone Killer and, to an extent, even Ranidu have Iraj to thank for their careers. He can also be credited with popularising hip hop music, and his desire to collaborate with established and respected musicians like Samitha Mudunkotuwa really helped cement the genre’s place as a pop-culture staple in Sri Lanka. While Iraj himself may not be the greatest rapper or lyricist (not unlike Dre, whose best known rhymes were ghost-written by the likes of Jay-Z), over his long career, the man has made some killer beats and produced a number of timeless classics that, to date, are some of the biggest hits ever to grace local chart shows. Eleven years after the release of his self-titled debut album, Iraj continues to stay relevant in the face of growing competition, and is still very much a force to be reckoned with. (Let’s face it, getting an actual Bone Thug to work with you is no mean feat).

Critically lauded and with its own cult-like following on social media, Drill Team, Sri Lanka’s answer to the Wu-Tang Clan, are arguably the finest lyricists working in Sinhala rap right now. Their cyphers are the envy of every rapper in the game and with every new “සියයට සීයක් ලාංකික රැප් අරක්කු” release, the group cover new ground, taking Sri Lankan music to places it’s never been before. Their unapolegetic අපේ වචන නෑනෙ අපටත් මෙල්ල, කියන දේ මූණට කැපුවත් බෙල්ල style is a masterclass in flow and technique, and a refreshingly angry, loud (and, at the same time, impressively understated) response to the mainstream and largely radio-friendly Sri Lankan rap of yesteryear. Underneath the admittedly played up bravado of their තනි කළු ස්වැග්, the group’s lyrics tackle serious social issues such as poverty, identity, and racism in a way that doesn’t sound obnoxiously holier-than-thou. To say these kids are game changers is an understatement. The music video for Drill Team’s 2015 hit Deviyange Baare was honoured at the Derana Music Awards last year for its innovative use of an eight-minute long-take in an abandoned building – an unprecedented technical achievement by Sri Lankan standards. Keep an ear out for the lyrical genius of Born Lord Manasick, Chrish ViX, Kalu Malli, D Rex, et al, whose genre-defining work will no doubt reshape the industry in the years to come.

Honourable mentions: Rival group 44 Kalliya are pretty dope (pay close attention to YK and Smokio. The latter has an especially bright future ahead of him). The uber explicit Rasthiyadu Padanama are also worth a listen (warning: very nsfw lyrics).

Something of an underground legend, Muvindu Binoy a.k.a. Bo Sedkid has for years been quietly carrying out some interesting experiments with various up and coming artists. His electronica influenced beats are reminiscent of Australian producer Ta-ku and are a breath of fresh air for anyone looking for something outside the mainstream. Bo is more than just a producer, though. A man of many talents, he wrote, directed and edited Drill Team’s award winning video Deviyange Bare. Expect big things from this guy.

The only Sri Lankan to make it big in hip hop’s country of origin (relatively speaking, of course) LA-based rapper/producer Delon Jayasinghe is one of the more, for the lack of a better word, authentic Sri Lankan MCs out there. With his heavily urban American approach to the medium, ably helped by his “real deal” voice, appearance and, yes, accent, Delon is among the few Sri Lankan born rappers whose rhymes sound indistinguishable from that of a professional, well-produced US top 40 artist. His beef with the controversial M.I.A. is well known and he commands a lot of respect in the local rap fraternity as an internationally successful artist who does not shy away from flaunting his Sri Lankan heritage wherever possible (he makes it a point to flash his ජයසිංහ tattoo in his videos, for instance), but above all, Delon is consistently good at what he does, and has a rather impressive track record to prove it. This writer’s personal opinion, however, is that his best has yet to come.

Now, I don’t speak any Tamil so unfortunately I’m not in a position to critique the many Tamil rappers working in the country today (Dinesh Kanagaratnam, Yawunan and Krishan’s brother Gajan come to mind), but it would be amiss to leave Krishan, one of the true pioneers of Tamil rap, out of a list of influential Sri Lankan rappers. Krishan Mahesan came into prominence in 2005 as a featured artist on a couple of Iraj’s hit singles including the critically acclaimed J Town Story and the popular radio hit Ran Ran Ran. He then went on to become one of the most recognisable voices in Sri Lankan hip hop, rapping in both Tamil and English, and collaborating with a variety of other rappers and mainstream artists, both Tamil and Sinhalese. Today, Krishan boasts a discography that includes collaborations with prominent Indian recording artists and also manages his own digital label.

Though known primarily for her amazing vocals, Ashanthi de Alwis has been able to shine as a female rapper in an industry dominated by men. Having shot to fame as a member of the BnS crew in the early 2000s as a vocalist, Ashanthi experimented with rap throughout her career and is today considered one of the baddest girls in the business, with some going as far as to call her the queen of Sri Lankan hip hop. While her rhymes aren’t exactly what you’d call hardcore, as firmly rooted as they are in pop, Ashanthi’s uniquely upbeat sound is just street enough to let you know that she means business.

Opinion is divided on his skills as a rapper and his social media antics leave a lot to be desired (to put it mildly), but, love him or hate him, there is no denying that Fill T exerts a tremendous amount of influence on the so called හෙළ රැප් scene. His bizarre stylistic choices, questionable lyrics and ‘no f***s given’ attitude ‒ that recently culminated in a very public feud with legendary rocker Chitral ‘Chitty’ Somapala ‒ have given Fill T a reputation for being something of a loose cannon; and this notoriety only adds to his appeal as a rapper that “keeps it real”, the genuine article, among rookie MCs looking for inspiration. Of course, his actual street cred is up for debate, but then, whose isn’t? The point is that Fill T has objectively and demonstrably contributed heavily to the growth of the genre. Whether or not you accept his artistic merits, the fact remains that it was Fill T that gave rise to the current #selfierap craze that has resulted in an explosion of hitherto undiscovered talent on the internet. Not only did he encourage these youngsters to start rhyming, but he also took it upon himself to promote and showcase their talent using his clout as an established artist. And for that, if not for anything else, Fill T deserves the industry’s respect.

What do you think? Do you agree with our list? Think we missed anyone important? Or perhaps you disagree vehemently? Hit us up in the comments.