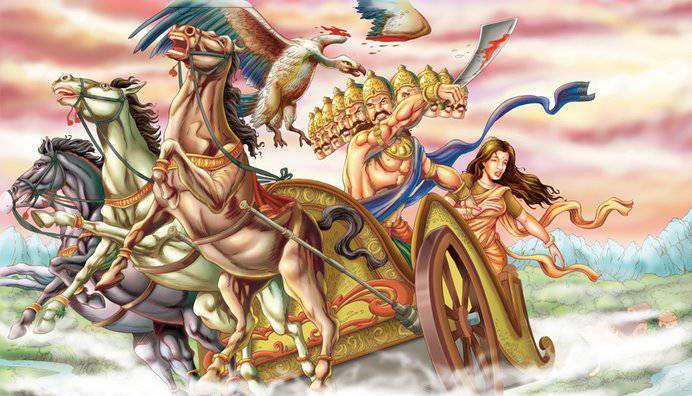 As Harry Potter fans eagerly await the release of the film version of J.K. Rowling’s book, Fantastic Beasts and Where to Find Them, we (also fans), started wondering about the ‘fantastic beasts’ that once walked, swam, or flew through the imaginative territory that us Muggles are more familiar with, specifically, our part of the world. Anyone familiar with ancient Sri Lankan and Indian art, architecture, and scriptures would know that these anthropomorphic creatures were aplenty in both Buddhist and Hindu mythologies. Even more interesting, are the tales that are associated with them.

We picked out five of the most fascinating mythical creatures associated with Sri Lanka, whose stories have been told and retold for millennia, and so we can tell you once more… The Sinha, as depicted in the national flag of Sri Lanka. Image courtesy wikimedia.org

The Sinha is perhaps the most commonly known mythological creature to Sri Lankans, primarily because of its placement on the country’s national flag. The word sinha translates to ‘lion’ and thus it lends its name to the Sinhalese, which translates to ‘lion people’. The lion has appeared in mythologies of many cultures, and has appeared as such in ancient art and scriptures, starting from Paleolithic times to the ancient civilizations of Egypt, Mesopotamia, and Persia, to the Judaeo-Christian and Islamic traditions. But how the Sinha became an important figure to Sri Lankans, is an interesting story.

According to the Mahavamsa, it begins in the Vanga country of India, where the king had a beautiful daughter. It was predicted that the princess would one day be kidnapped by a lion. To the agony of her family, this came true. She was kidnapped by a lion while travelling to the Magadha country, and was taken to a cave, where she was trapped. Years later, the princess gave birth to twins, of whom the son was born with the hands of a lion. He was given the name Sinhabahu. When he grew older, Sinhabahu managed to push the rock that blocked the entrance to their cave, and fled along with his mother and sister, finding refuge in a village in the Lala country.

The tale goes on to describe how the lion searched for his family, terrifying the villagers. Hearing of this, Sinhabahu went to meet his father, and shot him with an arrow, killing him. A few more years passed by, and Sinhabahu had a son, named Vijaya. The young prince was known for his misbehaviour, and soon he was exiled, along with 700 of his companions. He arrived on the coast of Sri Lanka, a land he dubbed ‘Thambapanni’, and he went on to become the first recorded king of the island. As such, the symbol of the Sinha is an important motif in various forms, in the art and architecture of Sri Lanka, and can be found in the ruins of ancient kingdoms. This one did not actually reside in Sri Lanka, but appears in a story in the Ramayana, the Hindu epic, in which the incidents of some of its chapters take place on the island. Jatayu is a demi-god who takes the form of a vulture. He was also a longtime friend of Rama’s father, Dasharatha, and the youngest son of Aruna, a personification of the reddish glow of the rising Sun.

Jatayu heard the cries of Sita, when she was being kidnapped by King Ravana, also known as the Demon King of Lanka. He realised Sita was in trouble and, according to the tale, decided it was his duty to serve her, not just save her, by saying to himself, ”My body is of no value if it is not used in the service of the Lord. The Lord’s most precious mother, Sita, is being kidnapped. It is my duty to stop this.” He then went on to valiantly fight Ravana, although he was very old at the time. Sadly, Ravana was able to use his feebleness to his advantage, and chopped off the wings and limbs of Jatayu. But it wasn’t long before Rama and his brother, Lakshmana, found him. He was lying in a pool of his own blood, but in his last moments of life, he was able to inform Rama that Ravana headed south after their battle.

Rama was heartbroken by the passing away of Jatayu, and was moved by his devotion to the Lord. He then carried out the funeral rites of Jatayu, along with Lakshmana. The tale of Jatayu is seen in the Ramayana as an example of a brave devotee who did not die in vain, because a failure ultimately led to success, as now Rama knew where to search for his Sita. A popular Tibetan depiction of the Garuda. Image courtesy thangkagaller.org

The Garuda is a large bird-like creature that appears in both Hindu and Buddhist mythology,. He has been described in many ways, the most common being that he had the features of both an eagle and a human. He is depicted often as having a golden body, red wings, white face, and a prominent beak. He also wears a crown, and has several limbs. He also wears jewellery in the form of snakes, on various parts of his body.

Hindus believe the Garuda, a minor deity, served as the vehicle (vahana) of the Lord Vishnu, one of the principal deities in Hinduism, but also revered by Sri Lankan Buddhists. He is flanked by his two wives, Rudra and Sukeerthi. It is also believed the Garuda represented the five vayus (winds) within human beings – prana, apana, vyana, udana and samana – through his five forms, Satya, Suparna, Garuda, Tarkshya, and Vihageshwara.

Garuda is considered by both Hindus and Buddhists as the enemy of the Nagas, the serpent race. In Sanskrit, the name Garuda translates to ‘the devourer’. There are many fascinating tales around the Garuda that appear in sacred texts. In the Mahabharatha, he is described as eating evil men. In the Bhagavad Purana, he fights Kaliya, the many-headed snake, by attacking him with his many wings and driving a fearful Kaliya into hiding. In the ‘Mahasamaya Sutta’ of the Sutta-Pitaka (Digha Nikaya 20), it is described how the Buddha makes peace between Nagas and Garudas.

The Garuda has also been depicted in ancient art, as far back at the Fifth Century BC. He is seen in the Eran column in Madhya Pradesh and a sandstone column in Besnagar, in India. He is also depicted in Nepalese and Cambodian art, as the Garuda appears in South East Asian mythology, too.

The Kinnara (not to be confused with the social caste in Sri Lanka) is another mythical creature that appears in both Hindu and Buddhist mythologies. It is described as a ‘paradigmatic lover, a celestial musician, half-human and half-horse (as described in the Vishnudharmottara) or half-bird’ (in the Buddhist Jatakas). In the Mahabharatha, it is further defined by the text, “We are everlasting lover and beloved. We never separate. We are eternally husband and wife; never do we become mother and father. No offspring is seen in our lap. We are lover and beloved ever-embracing. In between us we do not permit any third creature demanding affection. Our life is a life of perpetual pleasure.” An ancient hardwood figure of the Kinnara, from Chiang Rai, Thailand, dating back to the early part of the 20th century. Image courtesy asianart.co.uk

Interestingly, the name Kinnara in Sanskrit is followed by a question mark, to mean, ‘is this man?’, owing to its mystical appearance. In the Jatakas, they are described as an innocent couple of bird-like fairies, with the female form beating a drum and the male form playing a flute. They are associated with music and graceful dancing, and this is perhaps why ancient Indians named a string instrument, the Kinnaree Veena.

They appear in several stories of the Jatakas, such as Jataka 481, where there is mention of them being captured and put in cages for the musical entertainment of the kings. In Jataka 504, a Kinnara tells of how wild beings see them as human-like, but huntsmen call them ‘goblins’. In Jataka 485, they are said to reside in the Himalayas, as well as over the hills of Pandaraka, Trikutaka, Mallangiri, Candapabbata, and Gandhamandana. In Jataka 540, they are described as kind beings who nurse an abandoned baby, but are still looked down upon by the human beings who captured them. Despite the ridicule and torture they faced, the Kinnara are depicted in ancient art, and they are frequently seen in sculptures wearing garlands or holding trays of flowers for worship. In some art, they are seen holding musical instruments.

The Kinnara is also important in South East Asian mythologies that are believed in Japan, Cambodia, Thailand, and The Philippines, where they were seen in their fairy-like form and were associated with music and dancing. A Kandyan sittara illustration of the Makara. Image courtesy karava.org

Makara is actually the Sinhala term for ‘dragon’, but the creature that appears as the Makara in Sinhala and Hindu mythologies is not the same as the ‘dragon’ in Western mythology. In fact, the Makara, as depicted in this part of the world, is a sea creature. In Sri Lankan art, it has the head of a crocodile, horns of a goat, the feet of a panther, the body of an antelope and snake, and the tail of a fish. This is how it is illustrated on the ancient flag of the Karava race of people in Sri Lanka, which was used in their ceremonies.

In Vedic astrology, the Makara is the representative of the House of Capricorn in the Zodiac. In Hindu mythology, it is described as the vahana of Ganga, the goddess of the river and Varuna, the god of the sea. In Sanskrit, the word makara translates to ‘sea creature’. It is also believed to be the emblem of Kamadeva (also known as Makara-Ketu), the god of love and desire. The Makara, as seen on an ancient flag of the Karava people. Image courtesy karava.org

In Sri Lanka, the Makara is an important motif in the makara thorana, which adorn the entrances to many ancient temples. The makara thorana also appears in paintings and sculptures. The makara has been depicted sometimes as wearing jewellery or garlands. Some of the country’s most significant makara thoranas are found in the ancient ruins of Anuradhapura as well as at the Temple of the Sacred Tooth in Kandy.

The Makara is also a figure that appears in South East and East Asian mythologies, and can be seen in the ancient art of Cambodia, Burma, Laos, Vietnam, Thailand, Malaysia, and China.

Most of these creatures have numerous, fascinating tales associated with them in ancient Buddhist and Hindu texts, with many of them having displayed great acts of devotion and bravery. The translations of these tales can be easily found online and, if you are looking for something to kill boredom while you wait for the film, these stories are guaranteed to have you hooked.