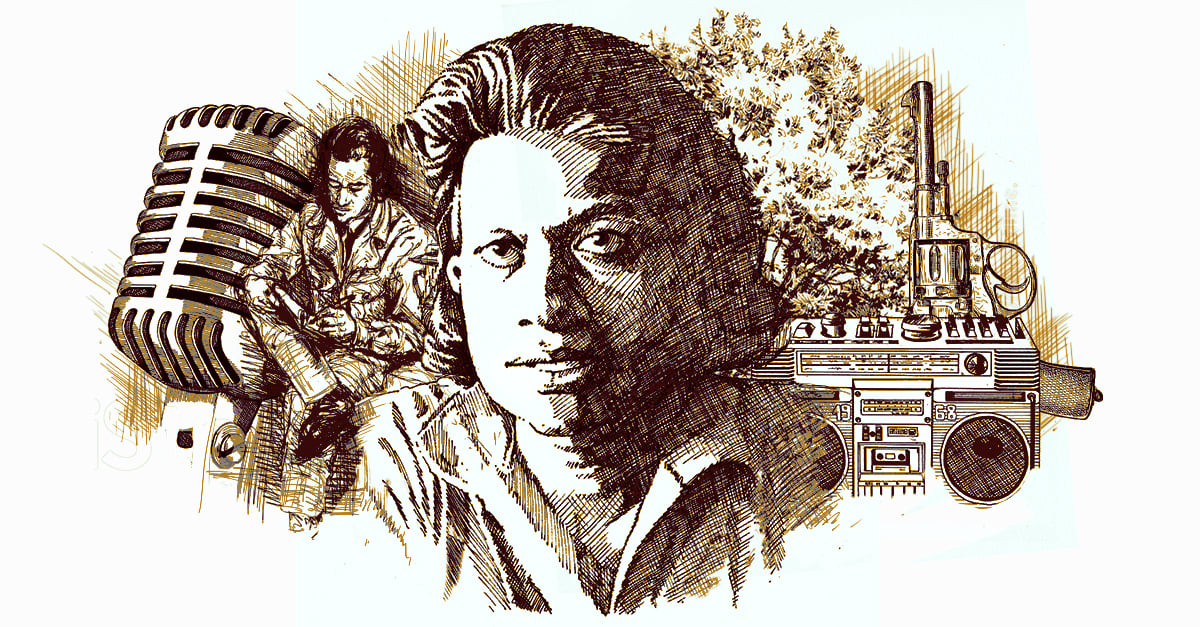 Premakeerthi de Alwis is a legend among Sri Lanka’s entertainment personalities. The journalist, TV and radio presenter, author, poet and songwriter was much beloved. The songs he wrote have stood the test of time and are still popular. ‘Prem’ was famous for being able to put songs together in an instant, often from unusual sources. As veteran lyricist Rathna Sri Wijesinghe once noted, critics called Alwis ‘the bard of Sinhala music’ for his ability to instantly write profound lyrics with little adherence to established norms. As such there are many stories behind his writing, like these three.

We Should Meet Again Tomorrow

Probably the best-known story about Alwis’s songwriting is about the song Heta Dawase (Tomorrow), sung by Priya Sooriyasena. The song is a ballad about  a young man asking his love to meet him again tomorrow, singing  that the one unchanging thing in a changing world is his love for her.

As the story goes, the first two lines of the ballad contain the secret of how this song came into being: the first verse says, ‘We both must meet tomorrow as we met today / The joy we had today we must bring tomorrow.’

One day, Sooriyasena had visited Alwis at his home for the specific purpose of having Alwis write a song for him. Since in Sri Lanka it is uncivilised to appear unannounced and empty-handed, Sooriyasena brought with him a bottle of Alwis’s favourite alcohol. But unfortunately, as he reached Alwis’s home, he found Alwis preparing to leave on  some urgent matter. Not wanting to leave Sooriyasena in the lurch, and eyeing the bottle of alcohol, Alwis scribbled those two lines on a piece of paper and asked Sooriyasena to come back tomorrow the same way he did today. The story was completely refuted by Sooriyasena years later.

In a television interview, Sooriyasena recalled that the song was written, not at Alwis’s home, but at the Sri Lanka Broadcasting Corporation (SLBC). He said that at the time, he had been  looking for someone to write a song for him, for a radio programme, in two days. He mentioned this to his friend Elmo Fernando, an announcer for the SLBC’s Sinhala commercial service, who said he could help by introducing Sooriyasena to Premakeerthi de Alwis, who was working as a radio announcer at the time. Fernando asked Alwis to meet him and Sooriyasena at the reception of the SLBC, where he explained the situation and asked if he could write a song quickly. Alwis pulled a piece of paper out of his pocket and scribbled the first two lines, handed it over and said he’ll write the rest for him tomorrow. The ‘joy’ referring to the to-be-written song. The frustrated Sooriyasena came back the next day all the way from Narammala for the song, and Alwis asked for the paper, and quickly wrote the rest of the song, asking Sooriyasena, ‘You can get the music for this, right?” to which Sooriyasena replied in the affirmative, and the rest is history.

Alwis is the author of a much popular ode to a mother’s love. Aadaraye Ulpatha Wu Amma (Mother is the Source of all Love). A song that’s very close to the writer as he had a close relationship with his mother—something that’s shown in the lyrics. A common saying among Sinhala Buddhists is Amma Budu Wewa or ‘Mother, may you become the next Buddha’, because it is believed that attaining Buddhahood is the highest level of enlightenment and that a mother’s love and sacrifice make her deserving of that honour. Alwis references this in his lyrics, saying that when his mother becomes a Buddha, he will be reborn and seek her protection as Prince Rahula, son of the Buddha, sought out his care.

It is said that the song was born after Alwis’s mother, who was a great fan of his work and listened to every one of his songs on the radio, asked him why, after having written so many songs, he still hadn’t written a song for her. “You write songs for stilt walkers, puppets, this and that and for everyone. But you still haven’t written a song about me,” she once told Alwis. ‘Alwis had laughed it off at the time, but wrote the song a year later, at a difficult time in his life, when his mother fell ill.

Her children had admitted her to hospital but the doctors had said that the situation was dire. Her health deteriorated to the point that  she was not in the right state of mind and couldn’t even recognise her son. This hit Alwis hard. He was her only son and every time he visited her in the hospital he couldn’t help thinking of her request. At the time singer, Victor Rathnayake was about to ask for a song from Alwis, but he refrained, considering the situation. But Alwis wrote this song and asked to record it quickly because of his mother’s state of health. Incidentally, Victor Rathnayake composed the melody based on the melody of a traditional Sinhala nursery rhyme.

Alwis and singer Victor Rathnayake were close friends. To Alwis, Rathnayake was Rathney, and to Rathnayake, Alwis was Prem. A personal and professional relationship that began with the Buddhist religious song Dewram Wehere flourished over the years. A popular song of this partnership is ‘Thani Tharuwe’ (Lone Star), which is another example of how Alwis could make songs out of the most everyday scenes.

According to a report in the Silumina, when Rathnayake, Alwis and some friends from the music industry were one evening relaxing by the sea, with Alwis was casually lying on the sand looking up at the sky, he at once, while staring at one bright lone star in the darkening sky had cried out, ‘Thani Tharuwe’. Which led to him penning this lonely song about a “star” he cannot reach.

“Prem” wrote four songs based on simple village life for Rathnayake to perform over the SLBC’s evening service. Followed by many romantic songs like ‘Tharu Athakurin’ (In Starry Writing), ‘Sandata Ahasa Aadaredo? (Does the Sky love the Moon),‘Prema Paaradise’ (In this Paradise of Love) and other songs like the aforementioned song about his mother.