The Bohras are hard to miss: the men are unmistakable in their snow-white robes, luxuriant beards, and caps of gold lace, and the women in their dainty dresses of pastel hue. The Bohras stand out everywhere, but not just because of their appearance. They have made a mark for themselves as business barons. In fact, business is in their blood. Their very name bears out this fact. It derives from the Gujarati word Vohru meaning ‘trader’.

The Bohras, in spite of their many achievements here, are relatively recent migrants from India. Although they have now made Sri Lanka their home, their origins lie in India. In fact, the largest concentration of Bohras anywhere in the world can be found there. It is also the seat of their spiritual leader who has a strong hold on his flock, wherever they are. The Bohras are basically Shia Muslims who have their spiritual origins in Egypt. Since Shias stress on descent from the Prophet’s bloodline as a condition for the Imamate (leadership of the community), they have also tended to split into various sects, since claimants could stake their right to rule based on descent. So what originally started off as a political schism evolved over time into an altogether new religious sect. This led to a series of splits and sub-splits from the main body of Shiism centred in Iraq.

To keep a long story short, the ancestors of the Bohras settled on a long line of Imams (leaders) that culminated with the Fatimids, a medieval Arab dynasty that ruled Egypt. The Fatimids took their name after Prophet Muhammad’s daughter Fatima, from whom they claimed descent. Despite being Shias in a largely Sunni Muslim country, they achieved a lot during their reign, including founding the Egyptian capital Cairo and building the famous Al Azhar University (which again takes its name from the daughter of the Prophet, Fatima Az Zahra {Fatima the Luminous}, now a bastion of Sunni Islam.

In the 12th century, the 21st Imam Tayyib mysteriously disappeared from public view, a sacrosanct state which Bohras call ‘seclusion’. Bohra belief holds that Imam Tayyib’s lawful heir, inerrant, infallible, and immaculate, walks the earth today as any good Bohra. It could even be any ordinary person on the streets, to put it bluntly. That is until such time he decides to reveal himself and claim his rightful place as the ruler of the community. Bohras worldwide look forward to the day this messianic figure stakes his claim to usher in a rule of justice and peace on earth. The spiritual leader of the Bohras today, Seyed Mufaddal Saifuddin, like all those before him, is merely a vicegerent of this secluded leader, which is why he bears the title Dai Al Mutlaq (unlimited missionary) rather than Imam (Leader). In fact, unlike other Muslims, Bohras don’t have the regular sermon on Fridays since it is only the real ruler of the community, and not his vicegerent, who can deliver such a sermon to the faithful.

The office was instituted by the legendary Queen Arwa of Yemen, the Grand Emissary of the Fatimid Caliphate, to look into the affairs of the community after the seclusion of Imam Tayyib. The first Dai appointed by her, Dai Zoeb, was succeeded by a long line of Dais that continues to the present day. It was during the Daiship of Yusuf Najmuddin that the seat of the community, known as the Daawat (mission), was shifted from Yemen to India. To this day, the spiritual leader of the worldwide Bohra community resides in Bombay. To the Pearl of the Indian Ocean

The Bohras seem to have discovered Sri Lanka by accident. Yusuf Mamujee, a local Bohra historian narrates with relish that the first Bohra entrepreneur who set foot in Sri Lanka, Jafferjee Esajee, was on his way to trade in a sailing vessel from India to the Maldives, when it was struck by a gale that took him all the way to Galle: seeing the opportunity there, he set up business. That was around 1830. He lost no time in getting down his family and business partners, from his hometown of Mandvi in Kutch, to set up shop here. News travels fast and soon Bohras from other parts of Western India like Surat, Bagasra, and Jamnagar in search of greener pastures were flocking here.

Interestingly, their first settlement here was Galle, where they also built their first mosque (which still stands) and it was later, when Colombo became a popular port of call around the middle part of the nineteenth century, that they drifted towards Pettah, the bustling business hub of Colombo. According to Mamujee, these pioneer Bohra settlers brought with them their families, whom they housed in the upper floors of their business premises. He avers that these early Bohra pioneers introduced Maldive fish to the country, by barter trading it in exchange for the rice which Sri Lanka produced in abundance.

Thus it could be seen that very early on, the Bohras were involved in the country’s import-export trade, exporting local produce and importing foreign goods, which is still very much the way Bohras operate today, making their money as middlemen. In fact in the olden days, they even owned large and hardy shipping vessels known as ‘buggalows’, that transported goods across the seas. Such was their enterprising zeal even in those times.

An idea of how business runs in the blood of the Bohras could be gleaned from the memorable words of Tudor Jones, who wrote about this enterprising community in an article titled “These People Make Ceylon” contributed to the Times of Ceylon Christmas Number, 1935: “I was once looking for University College, Colombo, and drove into an impressively large building which I thought must be it. But I found that it was the residence of a Bohra, and that university College was the meaner building next door”.

He continues that although they originally hailed from India: “They are settled down here, being the owners of much property. Making money is said to be not only their occupation, but their hobby and recreation as well. Their hive is 4th Cross Street, Pettah, a dusty avenue congested with vans, omnibuses, lorries and carts. At the end of the day, they drive back to their palatial residences. ‘Borah’ means trader, and Bohras always become merchants. ‘It is in our blood’, I was told by one of them, a man with laughing eyes and a melodious cultured voice. ‘We live well and enjoy life and don’t take our troubles seriously’”.

Little is it known that it is a Bohra firm, Akbar Brothers, founded in 1969 by Abbas, Abid and Inayet Akberally, that remains the largest exporter of Ceylon Tea. Jafferjee Brothers was for long another major player, exporting tea, rubber, and even apparels. The Hemas Group, run by the Esufallys, are leaders in pharmaceuticals and own a chain of hospitals. Manco Group is still very much involved in logistics and plastic manufacturing, and Debug, which is into IT, is headed by the Bohra family of Lukmanjees. The famous Royal Sweet Mart in Keyzer Street, Pettah, and its spinoff Bombay Sweet House, now relocated from Colpetty to Wellawatte, are also run by an old Bohra family, the Dawoodbhoys. Although in the earliest years of their settlement in Ceylon, the Bohras were more or less birds of passage, shuttling between India and Sri Lanka at their convenience. This ceased very early and they quickly settled down here, blending harmoniously with the rest of our denizens while jealously preserving their culture.

In fact, shortly after Ceylon gained independence from the British, the then Premier Sir John Kotalawela addressed the Bohra community, at a reception for the Bohra leader Dr.Sardar Saifuddin, at Lakshmigiri down Thurston Road: “You have lived with us and amongst us for so long that we now feel that we cannot live without you. And merchant princes as you are, when the call comes, I am sure you will put your hands into your pockets and help us to preserve democracy for all”.

It was Lakshmigiri that was later renamed Saifee Villa after Dr. Saifuddin. This beautiful mansion, that was purchased from the De Soysa family by Adamjee Lukmanjee, still stands proud and serves as a home away from home to the Bohra Leaders whenever they visit Sri Lanka. Lukmanjee also founded the Adamjee Lukmanjee Maternity Home in Grandpass, way back in the 1930s, providing much-needed care and relief to the expectant mothers of an earlier era. Little is it known that small as they are, the Bohras have contributed a Senator in the form of Kurban Adamally in the mid-1950s (whose memory is still preserved in Adamally Place off Galle Road, Bambalapitiya), and even a Member of Parliament: Saifuddin Jafferjee who served as MP in the short-lived government of Dudley Senanayake in 1960. 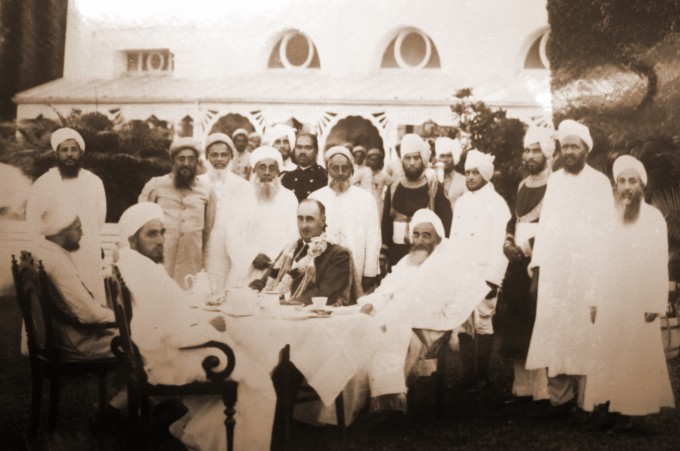 Bohras still play an important role in the life of our country, not only as business captains, but also as professionals, like the famous surgeon Dr. Shauket Mamujee, or the accomplished neuro physician Dr. Abdeali Alibhoy. They have also contributed a fair share of sporting champions, like the Mamujee twins Shabbar and Shabbir, who were national table tennis champs with triple crowns in the early 1970s; diving champion Shabbir Jafferjee, who shone in the early 1960s; and national Carrom champion of many years, Hassanally Shamsuddin.

The present Dai or Spiritual Leader of the Bohras, the 53rd of the line, Syedna Mufaddal is much loved by his flock here, though for the most part he is represented by his Amil or Deputy, Sheikh Yusuf, who takes care of the secular and spiritual affairs of the local community on behalf of the leader. However, all important religious decisions are referred back to Syedna Mufaddal, explains his namesake, Mufaddal Adamjee, an entrepreneur with a background in Islamic and Arabic Studies who hails from a long established Bohra family in Sri Lanka.

Whenever their leader visits here, the community becomes a hive of activity, since they are joined by fellow Bohras from all over the world. For example, in 2008, when then Bohra leader Syedna Burhanuddin visited here to deliver his famous Ashura Sermons celebrating the martyrdom of Imam Husayn, the son of Fatima and grandson of the Prophet Muhammad, the local community of about 2000 were joined by 15,000 more Bohras from all over the world. Such visits are good for the country, as they stimulate tourism and also good for the community, as it results in matchmaking and business partnerships, driving home the fact that local Bohras are not an isolated community, but proud members of a larger worldwide community, explains Adamjee.

Yes, the Bohras are a very close-knit community whose members watch out for one another.  At the instance of Syedna Mufaddal, community kitchens were recently set up in all parts of the world where Bohras reside. Known as FMB for short, these provide a wholesome meal a day for every Bohra family, be they rich or poor. This was mainly done with the noble objective of freeing women of their household chores, points out Adamjee. The free meal, according to the size of the family of four, is hand-delivered to the doorsteps in metal tiffin containers daily, and has a rotating menu that is mainly composed of rice and curry, and includes a sweet for dessert. All meals, which are funded by the community, are prepared in a large kitchen close to the Hussaini Mosque on Marine Drive, Bambalapitiya, which is all part of a larger complex known as Burhani Park, and includes a community centre known as Qutbi Hall and a school known as Serendib Burhani International School.