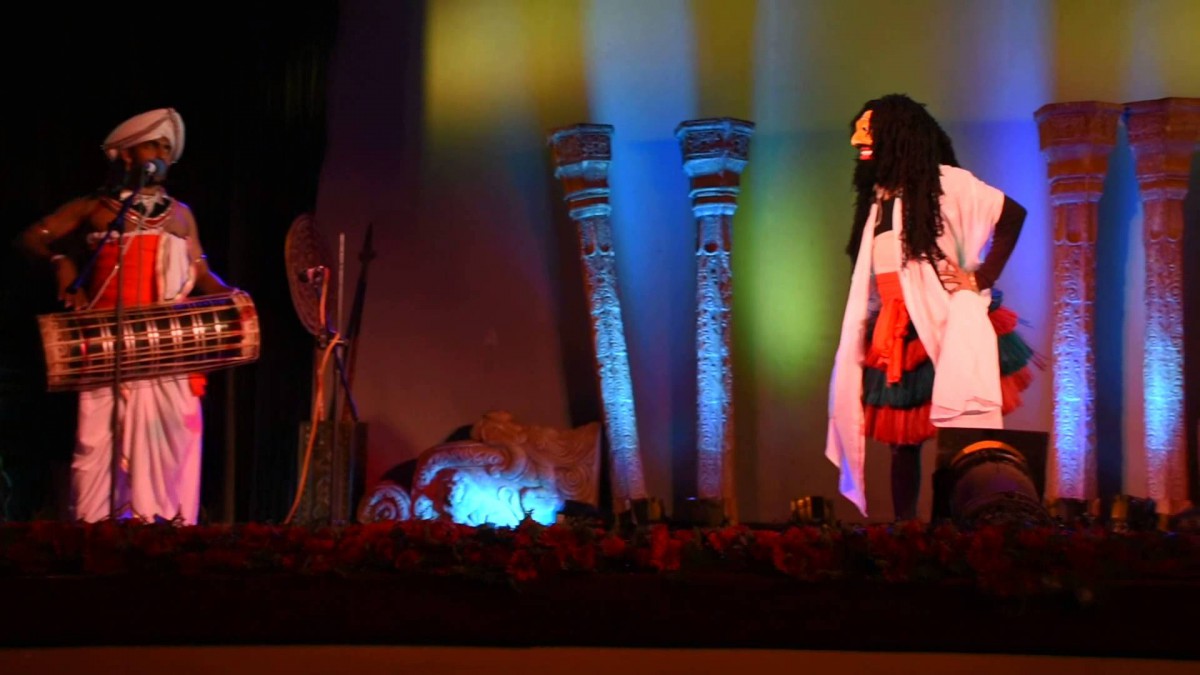 Long before the advent of western medicine, Sri Lanka had its own indigenous system of medicine and ritualistic healing.In the ancient times, people in Sri Lanka believed they fell ill because various dark spirits—or demons—invaded their bodies. Because of this belief, various healing rituals with the purpose of expelling these demons were conducted. Commonly known as thovil in Sinhalese, the best known of all the shanthikarma is the daha ata sanniya.

The ritual which can expel eighteen demons 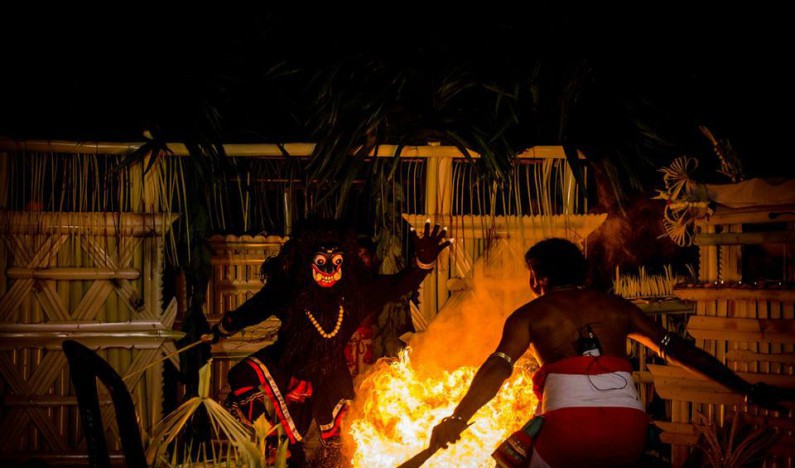 Even today, in certain homes this ritual is practised and it is one of the important ritualistic dances of the low country dance tradition. Image courtesy sjp.ac.lk

According to this belief, eighteen demons or sanni yakku are responsible for different diseases, which can be cured by performing an exorcism. Even today, this ritual is practised in the hopes of exorcising the demons which are believed to cause suffering and chaos in people’s lives. The ritual is also practised as a traditional dance, by traditional dancers like the students of the University of Performing Arts in Colombo.

The ritual consists of 18 masks that represent each of the demons that cause the maladies, with one mask for the Maha Kola sanni yaka—the chief of these eighteen demons.

It therefore, calls for nineteen different masks in total to be worn by practised dancers who perform the ritual healing ceremonies. A shaman healer who conducts the ritual—called a yakendura in Sinhalese—is also present at the thovil.

During a thovil, the yakendura calls forth the sanni yaka responsible for the sickness that has affected the person in question, and a dancer decked in mask and costume comes forward. Then the patient presents an offering to the dancer wearing the sanni mask, symbolic of presenting an offering to appease the demon that caused their affliction. The exorcist commands the demon to leave the body of the sick person, after which the thovil dancer performs an elaborate dance to appease the sanni yaka. Cholera, typhoid, measles, mumps, chicken pox and other contagious diseases were said to be the work of the dewa sanni yaka. Because these diseases were epidemics that proved fatal, the ancients believed that they were caused by the gods. Due to this reason the mask of this sanni yaka was carved with a crown.

The ancients believed that abdominal conditions such as flatulence and gout were caused by the watha sanni yaka, and they held the belief that these ailments could be relieved by performing the ritualistic dance associated with the demon.

Bilious diseases—caused by an excessive secretion of bile—were believed to have been caused by the pith sanni yaka. A symptom of such a disease is jaundice (a yellow tinge in the skin or eyes), and because of this most of the pith sanniya mask faces were painted either yellow or orange.

The Amukku sanni yaka was said to be responsible for vomiting and stomach diseases such as diarrhea. The mask’s face was green with an expression of disgust, depicting nausea.

This entity was said to be responsible for high fever and chills of the body. Malaria is one such disease which has both these symptoms, and it was believed that performing this sort of tovil would result in a cure. The face on the mask is painted red to depict a high fever.

Nightmares featuring fearsome serpents was believed to be the work of the vicious naga sanni yaka, and the mask contains the carving of a serpent on one side of it.

The pissu sanni yaka or kapala sanni yaka was said to be responsible for temporary insanity, which could be alleviated by performing this sanniya. The mask depicting this sanni yaka is green with a slightly manic expression in the eyes.

Migraines and other related ailments, as well as epilepsy, were believed to have been caused by the selesma sanniya.

This demon is said to have been responsible for paralytic conditions and diseases that cause numbness in the face, hands and feet. The face on this mask depicts lifeless facial muscles, like that of someone who suffered a stroke.

The mask of this sanniya represented a demon who was also supposedly responsible for temporary madness that was related to the influence of evil spirits.

The ancients believed that this demon was responsible for temporary blindness  which is why the mask of this sanni yaka is  usually a face carved with one eye.

This sanniya was associated with temporary deafness. The one side of its mask was carved with a serpent, because the ancients regarded the serpent as a deaf creature.

This demon was said to have been the cause of dumbness and speaking disabilities. Usually the mask of this sanniya was a face with an open mouth and no tongue and/or teeth.

Skin diseases that caused cysts, wounds and boils were believed to have been the work of the gedi sanni yaka, and the mask of this sanniya was a face full of boils and tumours.

They also believed that severe conditions of diarrhea—which is a symptom of diseases like cholera—were caused by the jala sanni yaka. The mask of this sanniya is red.

Diseases and illnesses that are caused by parasitic worms like the hookworm and tapeworm were believed to have been the work of the gulma sanni yaka. The mask of his sanniya is painted pale yellow, depicting the skin colour of patients suffering from anaemia as a result of worm diseases.

This sanniya represented temporary madness in people believed to have not been caused by dark spirits.

The maru sanni yaka was said to responsible for death. The mask of the Maha Kola sanniya. Image courtesy thepearl.lk

In local folklore, this is the chief of the eighteen chaotic demons who are responsible for all the physical ailments and diseases mentioned above. According to the legend, this demon is more fearsome than the eighteen minor demons he rules over.

The folklore speaks of a pregnant queen who lived during the time of Lord Buddha, who was suspected by her husband of committing adultery and was executed. During her execution she gave birth to a son, who fed on her corpse and became the demon Maha Kola. The legends go on to say that it was he who created the eighteen demons of illness to help him take revenge on his father.

The mask of the Maha Kola sanniya is a two-foot-high mask which features a demonic face with wings on either side—each one displays nine smaller demonic faces that are the masks of the daha ata sanniya.

According to the belief surrounding these rituals, the demons are brought under control with the offerings and the performance and banished back to the demonic world. Though it unclear when the rituals began, they have been practised in the southern and western provinces, areas part of the ancient Ruhunu kingdom.

Even today, there are a handful of people who practise these rituals in these areas, as part of the Ruhunu tradition of classical dance in the country. These rituals, however, now tend to be practised as cultural performances rather than ritual healings and exorcisms.