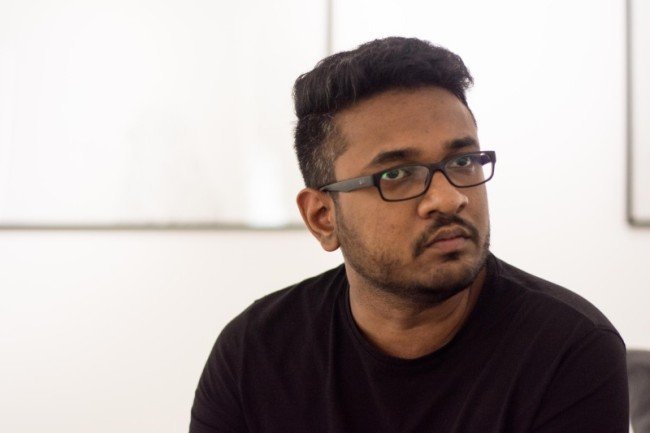 We are discussing a depiction of a mother.

It is an ethnographic portrait, now manipulated, set against a fiery explosion. It has been sourced from various art blogs on the internet, and is now being exhibited at the Saskia Fernando Gallery.

Muvindu Binoy is a visual artist and a cinematographer. The Holy Merchandise is the title of the exhibition that is ongoing at the time of conducting this interview. It is a question of truth; a confrontation of the factual between the realities of two generations.

Muvindu Binoy is a visual artist and a cinematographer

“The cross is ‘holy’, but it is also widely available merchandise. Selling it for a price does not take away from its holiness. With this exhibition, the title refers to what is apart from the dynamic of sitting down and observing the work. If I am a rock band, this is my merchandise, not my performance. It is more a property than art,” says Muvindu, when I inquire into, what seems to me, an elevating of the audience in their approach to the work. “I like the sound of ‘holy’. It is grand. It becomes a frame, and I do not use it for namesake. I’m saying it because I am fine with it, and when my parents questioned this word choice, it made me like the word even more.”

I ask him about the reference to Marina Abramovic’s quote in the concept note of the catalogue, where she challenges that, with the advent of mobile phones, human beings have no use of telepathy.

“I wanted to talk of the 1989 born, Generation Y, the 90’s kids. I wanted to do something for us. We grew up with technology, in the form of the internet, and we embraced it, elevating the place of the internet in our lives. If Marina is questioning why we have allowed to this to happen, I want to pose the question: why not?”

“I’ve observed that when our generation downloads images from artist’s blogs, particularly with the culture of Tumblr of reposting, and sharing on Facebook, it is not about the picture but about the internet,” he states, and, when asked how so, responds, “We don’t know how to share the feeling with the tree in front of us, but we know how to share it over the internet. We have that desire to express that feeling when we see the picture, but not when we face the same object or situation in real life.”

The question of sincerity emerges, and I bring up a concept explained by Werner Herzog, one of the cinematographers whose work Muvindu admires. Herzog speaks of an ecstatic truth, where when the audience or participant is elevated in their approach to the work, the experience they have with the work is genuine while the representation may be factually incorrect or manipulated.

“What I am presenting with each image is my version of a truth. I am not trying to solve a problem or answer a question. It could be exaggerated or minimal. I choose for it to be stylish,” he defends, “With our generation, even if we are trying to share that we are crying, it has to be stylish.”

Our attention shifts to the images that seem to represent or refer to an era of conflict.

“I don’t have an experience of the 70’s and 80’s and the events that transpired. I only know the war through its media representation. It is facts and numbers. I didn’t feel it,” Muvindu shares, “What I do know is the feeling of seeing a beautiful picture and then wanting to destroy it and create something of my own. I want to take shoes from one image and put it on someone’s head in another image.”

Muvindu relates his creative process to everyday phenomena, quipping, “every day, we see posters, ripped, still, all together, there’s another picture there, if you want to take it. You could take a photograph of it and take it home. What I’m doing with collage emulates that. The images are sourced from a public domain and are being manipulated; it is a form of vandalism.”

He then shares that he has been through a phase of attempting such vandalism, in real life, out on the streets. “Those attempts failed, so, instead, I took to the internet.”

We now focus on the notion of reality and how it differs between the generations of Baby Boomers and Generation Y, a conversation that this exhibition is all about.

“We get stuck trying to define reality as organic, nature-friendly, politically correct, standing on the ground, as Baby Boomers would put it,” he claims, “Generation Y doesn’t get it. We’re covered in too much information. I think it’s dangerous that we not only know how to use the internet, but also when to use a book. The Millennials don’t know how to use books, outside of textbooks.”

“It’s easy to say that the internet is not organic. I’m saying it is organic. Everyone has been waiting for Godot to come, sit down and be politically correct. Godot has already come and gone. That’s why I refer to Marina. I’m not saying she is wrong. I’m not saying that the reality of Baby Boomers is wrong,” Muvindu urges, “I’m simply saying, why can’t ‘this’ be?”

I then inquire into his insistence on using digital media as opposed to creating collages by hand.

“I got tired of realistic manipulations of images on Photoshop. People would say that anyone can do digital work, but I stuck to it and found that I got better at it. I’ve been doing these digital collages for a while, and, still, the cuts are rough and very stupid, out of shape and pixelated,” he relates, “ ‘This‘ is a kind of accident, actually.”

“I put a burger on the artist Yohan Medhanka’s face, and he liked it. With his permission, I took images from his last exhibition, Kuruttu, and added cellphones to apsaras and that got around. That was the breakthrough,” he admits.

When I pull up his resistance to realistic manipulation, it becomes apparent that Muvindu’s notions of reality and realism are his own.

“Realism is important. If you say that realism is organic, however, I’m not with that,” he states, “Using random images is realism. They have nothing to do with each other. To me, this is real. This is life. This is the internet. A glam model from a catwalk meets a beggar off the streets of Pettah.”

The Artist’s Place in the Pentimento

“There is a simple connection,” he snaps his fingers, “when I see an image on the internet. I feel it. I look at it against another image and see what’s there between them. I have an instinct that what I am feeling is right. When I look at one, I see a girl and a tree, and that is making me feel something. I need to feel something to know what to do,” he says, as though provoking a question.

“To remove the tree feels godlike. I control it now. Sorry to the creator! I’m going to destroy it, behead it, put a mango on it, and have my own composition.”

I then inquire into the depiction of a mother.

“We only see the explosion, the divorce rates, the working life, and everything else people point to when they say, so easily, that there are no mothers anymore,” Muvindu says, “I have used an image of an ethnic woman, but it is not representing or referring to ethnicity, it is about mothers these days. I’m saying that the woman in high heels can be a mother and you cannot judge her ability to be a mother on the size of her heels.”

Muvindu’s first engagement with a framed image was that of the Buddha in an old Singhalese home, that of his grandparents. “It wasn’t a long, drawn-out, spiritual moment. It was like, ‘Hm’,” he recalls. “I lost that for a long time, until a few years ago when I visited a friend’s exhibition. It helped that the artist was a friend and so I had that introduction to the work. If someone knows me, they would value this exhibition and my work more.”

The Holy Merchandise can be viewed at the Saskia Fernando Gallery at 41 Horton Place, Colombo 7. It is on until April 18, 2015.