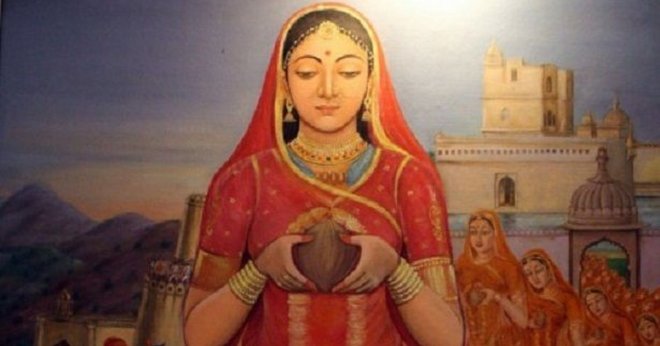 The Sinhalese Princess Padmavati: A Real Or Fictional Character?

Sanjay Leela Bhansali’s ‘Padmaavat’ (changed from the previously named ‘Padmavati’ following protests in India), is in cinemas in Colombo and is a tale of love, honour, valour, dignity, and sacrifice. A Rajput king falls in love with a ‘Singhal’ (presumably Sinhalese, but definitely Sri Lankan) princess, and takes her back with him to Chittor, where their love withstands the greed of a Khilji sultan.

While the movie is based on a 1540 CE poem written by Sufi poet Malik Muhammad Jayasi, it deviates from the original text in many areas: in the poem, a talking parrot ‘Hiraman’ tells Rajput king Ratan Sen of the Singhal princess Padmavati’s beauty, prompting him to seek her hand in marriage. In the movie, Ratan Sen chances upon Princess Padmavati while hunting in the Singhal jungles.

In the movie, Brahmin courtier Raghav Chetan (who tells Khilji sultan Alāʾ ud-Dīn Khaljī about Padmavati’s beauty, inciting the siege of Chittor), is banished from the kingdom for spying on King Ratan Sen as he kisses Rani (Queen) Padmavati, but Malik Muhammad Jayasi’s poem speaks of the Brahmin being removed for fraudulently winning a contest.

On many other occasions the movie deviates from the original text, as is to be expected in an adaptation, but in one area both the poem and the movie stand tested: the historical accuracy of the character Padmavati, or Rani Padmini as she was also known. Was she real, or was she the fictionalised product of the poet Malik Muhammad Jayasi’s imagination?

Khaljī, whose ambition was to be the next Alexander the Great, laid siege on Chittor in 1302-1303, and took the city after eight long months. While historians attribute Khaljī desire to extend the borders of his sultanate as reason for laying siege on Chittor, legend has it that it was the Queen Padmavati that Khaljī wanted.

The legend extends south of the Indian subcontinent, where here in Sri Lanka, Rani Padmavati is by one account thought to be a Sinhalese princess, and by another account the daughter of a Rajput prince living in Sri Lanka.

Writer and history researcher Hasitha Abeywardena told Roar Media that the renown Professor Senarath Paranavithana had, at a speech made at the Sri Vijayasundararama in Dambadeniya in 1958, talked of a close association between the Rajputs and the Sri Lankan monarch during the Dambadeniya era (1220 -1345)—during which time, Ratan Sen, Alāʾ ud-Dīn Khaljī, and Padmavati were thought to have lived.

“In those days, in addition to a battalion of Sinhalese soldiers, the King’s army (of the Sri Lankan kingdom of Dambadeniya) had a battalion of Aryan soldiers,” Abeywardana quotes Paranavithana in his blog. “The commander of the Aryan battalion was called a ‘takur’ ( meaning ‘leader’ in Hindi).”

“The Rajput battalion was instrumental in diffusing an internal coup and ensuring the continuation of the monarch. It was during this time that a Rajput king married Padmavati, a Sri Lankan princess,” he writes.

In another article titled ‘The Rajput people of Sri Lanka’ (published in the book, ‘Collected articles of Paranavithana’), Professor Paranavithana suggests that Padmavati may have been the daughter of a Rajput prince living in Sri Lanka, Abeywardana told Roar Media.

Although the movie depicts Padmavati’s father Gandharva Sena as the ruler of Singhal at the time, there is no account of a Sinhalese king by that name. That, nevertheless, does not rule out the idea that Gandharva Sena may have been a provincial ruler, a chieftain or a Rajput prince who lived in Sri Lanka, as suggested by Professor Paranavithana.There have also been local adaptations of the tale of Padmavati, with, according to Abeywardana, Sri Lankan dramatist John de Silva  (1857 – 1922) writing a stage play by the name of ‘Padmini’ in 1910.

“According to L.D.A. Ratnayake who authored the biography of John de Silva, the play was written in 1910 and had 22 scenes and 34 songs. The play was aimed at arousing patriotic feelings among the Ceylonese community, as Padmavati was considered a woman of great valour and beauty,” he explained.

Abeywardana also spoke of the famous Sinhalese song ‘Dakkoth Padmavati’, which speaks of the beauty of Rani Padmavati (‘Dakkoth Padmavathi – Aaley nokara baree’. If one sees Padmavati – one cannot but love her) and said the song was first included in the play ‘Padmavati’, produced by Charles Dias (1878-1944) another doyen of Sri Lankan theatre at the turn of the last century.Abeywardana said the song was also reproduced by Professor Siri Gunasinghe in the movie ‘Sath Samudura‘ in 1967. The story of Padmavati has gone beyond the shores of Sri Lanka and India than first imagined: in addition to there being Persian, Tamil and Bengali adaptations of the story, in 1923 French composer Albert Roussel set the story of Padmavati in a two-act opera.

While pundits on either side are unable to historically verify the existence of the Sinhalese princess Padmavati, what is clear is that she has captured the imagination of popular culture, both here and abroad, literature having immortalized her throughout the centuries.

Cover: A rendition of Rani Padmavati, or Rani Padmini, as she is also known. Image courtesy scroll.in