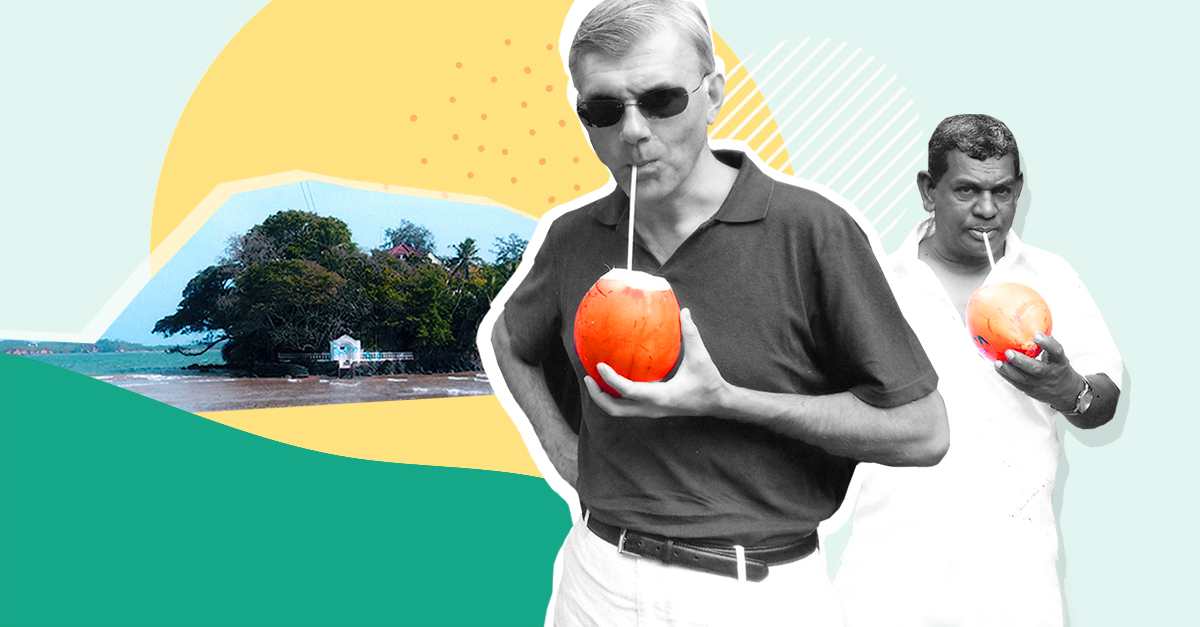 ‘…in early December 1977, my twelve-year-old self realized I would not be back for some time. So I scribbled something on a piece of paper—something to the effect of ‘I will be back’—and buried it next to the lemon tree by which I had morning class[…]

That was the end of my Sri Lankan childhood.’

Although he grew up in Sri Lanka, Razeen Sally (54) and his family left the country having experienced increasing tensions, against the setting of a rising civil war.

Decades later, a renowned academic and professor, Sally returned to Sri Lanka as a political and economic advisor. In 2009, he began his journey as a traveller, rediscovering a country with which he shared deep personal connections: a country that was, at the time, undergoing its own post-war changes.

“This country is really blessed with an almost endless variety of stunning places, which is a combination of landscape and people,” Sally told Roar Media. “And of course taken for granted by most Sri Lankans!”

Living and working in Singapore, often only travelling to Sri Lanka for work, his recently published travelogue ‘Return to Sri Lanka: Travels in a Paradoxical Island’, spans ten years of travel in the island.

There are layers to Sally’s travels—his exploration of the terrain is coloured by his early days in the country, his later involvement on a policy level, as well as the years spent away. He is—as considered in the book—‘a native, a tourist, both and neither’.

“When I’ve gone on these journeys, there’s my childhood and childhood impressions of Sri Lanka. And that is very much during the political conditions of the 1970s, which was also when my father was arrested,” Sally explained.

Sally’s father and uncle were subject to draconian exchange control laws passed during this time, against the backdrop of JVP rebellion. Enacted within the country’s controlled economy and criminalising most foreign exchange transactions, this time period saw several businessmen arrested for violating these exchange control laws. And at the time, they were the Managing Director and owner of Mount Lavinia Hotel, respectively.

“I acquired political consciousness at the age of six, because that’s when our house was raided, ransacked, and my father taken away,” Sally said. “He served a year in remand, a year in prison, and we could not leave the country for almost seven years.”

He writes of his parents’ shipboard meeting; while his mother was headed to Australia and his father, back to Colombo. Their romance spilt over into courtship by post, a brief meeting, and a proposal in the form of a love letter.

Sally also recounts his life in Sri Lanka, as well as the absent years, and the emotions he encountered after he returned after his father’s death. He writes as a child having loved Sri Lanka almost unknowingly. The wonder in rediscovering his country is sometimes weaved into the historical narrative of his experiences.

Outside the ‘Colombo Bubble’

Sally intentionally seeks places and travels further than the ‘outstation trips’ he remembers from his childhood. “Over the decade I have probably done at least 50,000 km on the road, maybe more,” he said.

He also writes about the detachment between Colombo and the rest of the country, even in the method of travel. “Through this book, I want the reader to have a deepening love for Sri Lanka and incite one to go out and explore,” he said.

With a focus on places and people, he weaves in numerous encounters with notable Sri Lankans, and both new and old friends.

There is Charmaine, known for her Burgher cooking, specifically ‘lamprais’. She yearns for the good old days of Ceylon and believes that ‘Sri Lankan men are hopeless’.

While, Uncle Ranjith and Aunty Jameela live on an estate bordered by the Ella Rock on one side. Aunty Jameela defied her family by entering into an interfaith marriage with Uncle Ranjith, who can talk for hours on end about his job as a planter.

“The people are [themselves] interesting,” Sally enthuses. “And sometimes, they are windows into a broader story about the country or that particular place at a particular time.”

To Sally, Sri Lanka is riddled with paradoxes. One such contradiction is the contrast of its beauty and tourist charm alongside its history of violence. “This is not just what happened in recent decades, but goes way back,” he pointed out.

One of his treasured moments is visiting the ancient monastic site of Kudumbigala in Arugam Bay, a functioning aranya (monastery) for over 2, 000 years. “What one sees amidst this spectacular jungle with rocky outcrops are these drip-ledge caves, a few hundred of them. There are elephant droppings and leopard paw prints, and ten monks live there,” he said.

Past the aranya is the closest village, Panama. “I was curious about it because it is a mixed Sinhala and Tamil village. Has been for about two centuries,” he said.

The journey ended on a Friday afternoon in Panama, when the villagers were conducting their weekly pooja. Sally describes seeing Tamils and Sinhalese from the village worshipping the same temples and sharing the same food. “That moment, I thought, was a good way to end the book,” he said.

“Amidst all the gloom and pessimism that crops up—certainly in places of the book—I thought that was a good metaphor for what Sri Lanka should be like.”