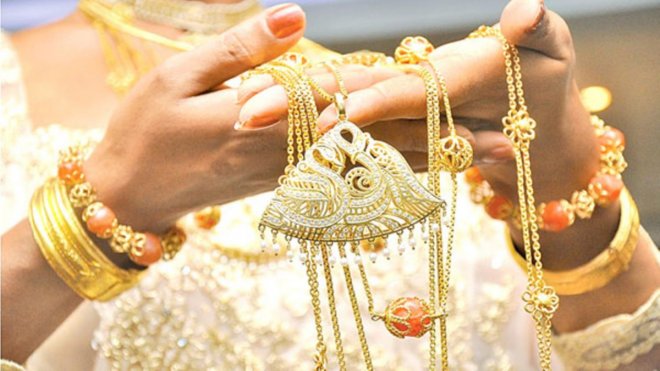 The distinctive jewellery worn by a Kandyan bride has always been the cynosure of many eyes. There are many contemporary versions of Kandyan bridal jewellery that appeal to the present generation. However, the traditional jewellery set is different—in colour, texture, weight, and appearance. It is a widely held belief that a traditional Kandyan bride wears 26 pieces of jewellery on her wedding day.

The Kandyan bride’s regalia—from head to toe—traditionally consisted of the following pieces: the headdress known as the nalal patiya, the sun and the moon (ira/handa) on either side of her head, and the lampshade-like earrings with tassels and a row of tiny hanging pearls, called dimbithi.

She also wears an armlet called ketchagama, a hair ornament called konda maala, as well as the waistlet called the havadiya.

The konda maala is a unique hair ornament, somewhat resembling a konda koora or a hair stick. It is fixed on the middle of a bun which is placed low on the head in the style known as the Sinhala bandapu konde. It has a circle or flower shape embedded with gems in the middle and five chains that spread out to similar flowers.

The traditional Kandyan bride also wears seven pendants with long chains, called the maala hatha. Each called a padakkam maale, the pendants have minor size differences and the chains themselves are of different lengths. However, all seven pendants of any given set are the same in design. Traditionally, these pendants would be in the shape of entwined swans called hansa poottuwa. This motif symbolises the unity and togetherness of the wedded couple.

How the maala hatha are accounted for differs from person to person, as some include the nalal patiya—which also has a pendant—in the series of seven chains.

The koodu pota has three strands of pearls, which are punctuated at intervals by gold beads in the shape of a geta beraya (traditional drum). Those beads themselves are embedded with red gems. A special type of pendant called a makara hangs from the koodu pota. However, this unique piece of jewellery is rarely present in modern versions of the Kandyan bridal set.

The bride also wears a pethi maalaya or a long necklace of beads in the shape of bitter gourd seeds or flowers, as well as an agate necklace called agasthi maalaya and a necklace with rounded beads called a gedi maalaya.

Haritchiya—a brooch worn on the shoulder to keep Kandyan saree, the osariya, in place—and the optional anklets (or salamba) complete the look.

Warding Off The ‘Evil Eye’

There are certain attendant customs and traditions that are followed during the dressing of a Kandyan bride. Warding off evil and invoking blessings are important parts of these rituals.

Chief among them is the placing of the nalal patiya on the bride’s head at an auspicious time. It is usually placed there by the mother or by a close female relative, symbolising her blessings for the union. Wearing the nalal patiya was the exclusive privilege of royalty in the past; Kandyan brides wear it today to distinguish themselves from the rest. Some consider it bad luck for unmarried maidens to wear the nalal patiya before her wedding day.

Other auspicious practices include placing the dimbithi on the right ear first.

The designs of the jewellery and the manner in which they were worn were also meant to ward off evil. The ketchagama’s box-like structures are said to protect the wearer from any harm, acting as a talisman. The seven pendants of the maala hatha are said to represent the blessings of seven generations of kin. These seven necklaces were also believed to ward off evil as well as invoke the blessings of fertility and prosperity from Goddess Paththini. The ira/handa is said to symbolise an eternal and happy marriage.

The craft of making these solid yet intricately worked designs—which is the hallmark of Kandyan jewellery—is passed down from generation to generation. The Kandyan Arts Association confirms that artisans from villages in the hills of the Kandy District such as Naththaranpotha, Neelawala, and Elugoda, still practise this unique art.

Kandyan jewellery is famously made from silver and plated with gold when required. In modern times, semi-precious stones such as zircons, amethysts, topaz, tourmalines, and garnets are widely used.

Many brides today choose to hire imitation jewellery from bridal dressers who specialise in Kandyan bridal dressing, and the jewellery comes as part of a ‘package deal’. For the very few who seek to purchase it, the cost can range from Rs. 60,000-150,000, depending on the designs, the number of items purchased, and the place of purchase. The sets that are commonly used by most modern brides today are only loosely based on traditional designs, and the number of jewellery pieces in a set varies widely.

Harris Wijesinghe, one of Sri Lanka’s veteran beauticians with over 40 years’ experience in the field, is a strong proponent of being true to the tradition.

He noted that the traditional Kandyan bridal set consisted of items set with rubies, emeralds, and pearls. The metal used was copper, which was dipped in silver and then dipped in gold. This, he said, brings out the depth in them. “Traditional Kandyan jewellery is dull in colour,” he added. “The idea is that when you wear it, you are the highlight.”

Kandyan bridal jewellery shows a remarkable similarity to those worn by an Indian bride. It is widely believed that these designs first arrived in Sri Lanka along with the South Indian queens who married Kandyan Kings, and remained because they found favour with the royal family. Eventually, the Kandyan nobility, too, embraced this style of jewellery and a new tradition was born.

“Sri Lankan women throughout history have been clad in jewellery, so the concept of jewellery was definitely not new to us,” said Professor Mudiyanse Dissanayake of the Institute of Aesthetic Studies, University of Kelaniya. “Rengammal, the last queen of the Kandyan Kingdom, and noble ladies of that era, are documented as wearing the eta maalaya and agasti maalaya and some other items of jewellery that are worn by the Kandyan bride, so we can assume that popular designs from India made an influence during that period.”

In terms of workmanship, some believe that there is a resemblance between Kandyan jewellery and the kundan and meenakari styles of jewellery from India. Kundan is a traditional form of jewellery where a gold foil is set between the gems and their mount. Meenakari, meanwhile, refers to the art of decorating metal with enamels.

Malkanthi Dullewe’s family in Kandy owns an heirloom set which they keep divided amongst close relatives for an additional measure of safety. It is brought together when a special occasion calls for it. In recent times, some of these have been replicated based on their original designs owing to general wear and tear.

Dullewe noted that many brides, eager to follow Kandyan traditions, are misled by commercial shams. The atha mudu valalla, or the hand ornament with rings on each finger of the right hand that connects to a pendant and bracelet,  popularly worn these days, is one such aberration. “That was part of the Kandyan dancer’s outfit,” explained Dullewa. Traditionally, the havadiya was worn in silver since gold was not worn below the waist.”

Nirmala Amunugama, a member of another old Kandyan family, said that her father’s sister used to possess a full set of antique Kandyan jewellery, which her family borrowed for weddings. “Sadly, all I have now is a pethi maalaya which belonged to my mother, a seri valalla and a kara patiya. I am not sure who has the rest of the items.”

The Kandyan bride has continued to be a symbol of regal poise through the years. The popularity of her jewellery, albeit in varied versions, assures that it will continue to be coveted for a long time to come.