On the fourth of July of this year, amidst the celebrations of the US Independence day, a large steel sculpture, composed of two concentric cylinders—one silver and the other gold—was unveiled on at the Santa Monica Boulevard in the city of Los Angeles. Named the Freedom Sculpture, it was gifted by the Farhang foundation—a non-political, non-religious, non-profit organisation that promotes arts and culture among the Iranian-American community—to the people of this city. The Freedom Sculpture was unveiled on the fourth of July 2017, amidst much celebration by the Iranian-American community. Image courtesy latimes.com

The credit for the design and engineering of this immense sculpture goes to Cecil Balmond, the world-renowned architect, engineer, and artist of Sri Lankan and British heritage. Over the years, he has garnered international recognition for several famous structures across the globe. The Centre Pompidou-Metz museum and the Serpentine Pavilion in France, the CCTV tower in Beijing, and the ArcelorMittal Orbit for the London 2012 Olympic Park are a few of his creations.

Over 300 artists and architects participated in the open design competition that was held to choose a suitable design for the Freedom Sculpture, and Balmond had the honour of winning this competition.

His style of blending science with art is what appeals to many people the world over, and even with the Freedom Sculpture of Los Angeles, his creativity shines.

A modern-day work of art inspired by ancient history 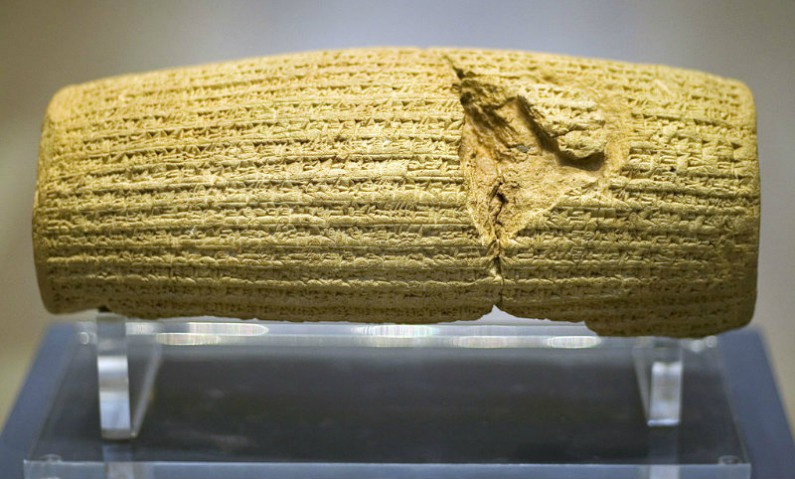 Widely regarded as the the first declaration of human rights, the 2,500 year old Cyrus Cylinder was the inspiration behind the design of the Freedom sculpture.

Speaking to Roar, Balmond stated that his distinctive style of creative design is a result of his interest in various disciplines such as art, architecture, literature, science and music.

“One could argue that design is defined by its attempt to integrate knowledge of all kinds of disciplines. Therefore, trans-disciplinary methods can be used both as a research method and a part of the creative process. I believe the designer is artist, innovator, engineer, philosopher, humanitarian and social reformer,” he claimed.

The design that Balmond came up with for the sculpture is actually inspired by an ancient artefact: the 2,500 year old Cyrus Cylinder which is widely regarded as the the first declaration of human rights. The historic cylinder was inscribed in the ancient Akkadian language, and it highlights the ideas of individual and religious freedom in a diverse culture and society, ideas which were put forward by the Persian King Cyrus the Great. The Cyrus Cylinder is therefore of great importance to the Iranian-American community, which is why the design for the Freedom Sculpture was modeled after this artefact.

Balmond had put a lot of thought into the design of the Freedom Sculpture. His sculptural interpretation of the Cyrus Cylinder is made out of stainless steel and the structure is designed in such a way that the two cylinders are linked internally. They look like moving lines of script—symbolic of the empowering words inscribed onto the cylinder.

Prime numbers and a prime location

Another interesting fact about this sculpture is that it has been generated and regulated by the law of prime numbers. Since ancient times, prime numbers have been associated with universality and mysticism because they occur at seemingly random intervals, and with surprising regularity. In a way, this highlights the theme of shared freedom among people in a diverse community, the same way the design of the sculpture does.

“My focus and in-depth research into animate geometry, emergent form and organizational systems created distinction. This new perspective creates a platform of originality from which my creations emerge,” stated Balmond.

Moreover, he designed the Freedom Sculpture in such a way that it creates an illusion of movement from all angles when viewed by fast-moving traffic—his aim was to make the sculpture a visual metaphor for the idea of freedom through diversity, which is represented by the Cyrus Cylinder.

The sculpture’s prime location, at a public transport median on Santa Monica Boulevard—one of the busiest areas in Los Angeles—ensures that multitudes of people will be able to witness the sculpture and bear in the mind the message that it represents.

Crowdfunding on an immense scale 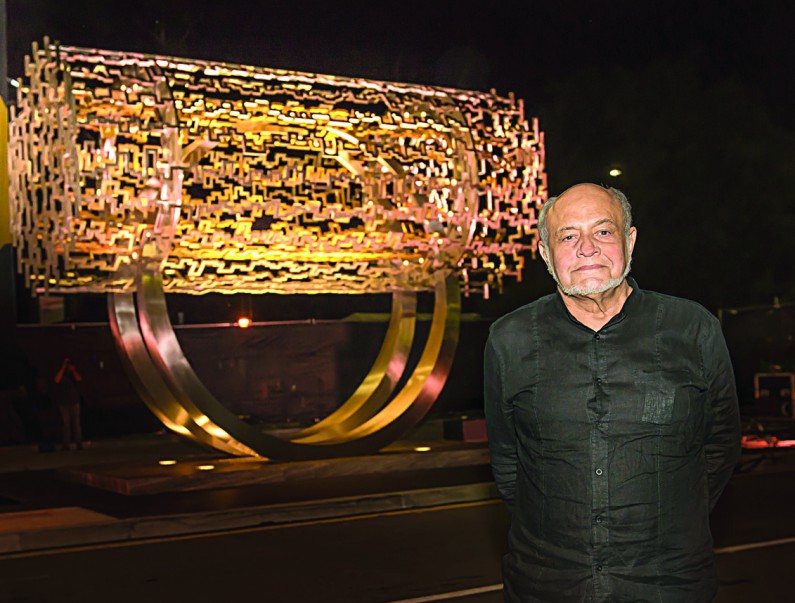 The solely crowd-funded public art installation drew in the support of more than a million people from across the globe. Image courtesy la.curbed.com

It took four years for the Farhang foundation to make this project a reality. Over a million supporters from 50 countries—including the USA—came together to bring the Freedom Sculpture to life. It is now considered the most widely crowd-funded monumental gift in the history of the US, with the total cost at US $ 2.2 million.

The Freedom Sculpture is also significant for the city of Los Angeles—and the state of California—because in a way it is a ‘Statue of Liberty’ for the West Coast of the US.

It is of great prestige to our own country that one of our own was the creative genius behind such a significant monument that has gained the attention of the international community.

Balmond added that Sri Lanka, too, very much needs a sculpture that holds great meaning—similar to the Freedom Sculpture and its symbolism in relation to the diverse communities of the city of LA.

“We all know Sri Lanka’s history,” he said. “The struggle for tolerance, diversity and personal freedom has taken many forms over hundreds of years. I also feel that the power of public art and its potential to unite a population is underestimated or simply not understood in Sri Lanka. Projects like a new Freedom Sculpture [in Sri Lanka] would begin to transform the artistic, societal and cultural landscapes,” Balmond stressed.