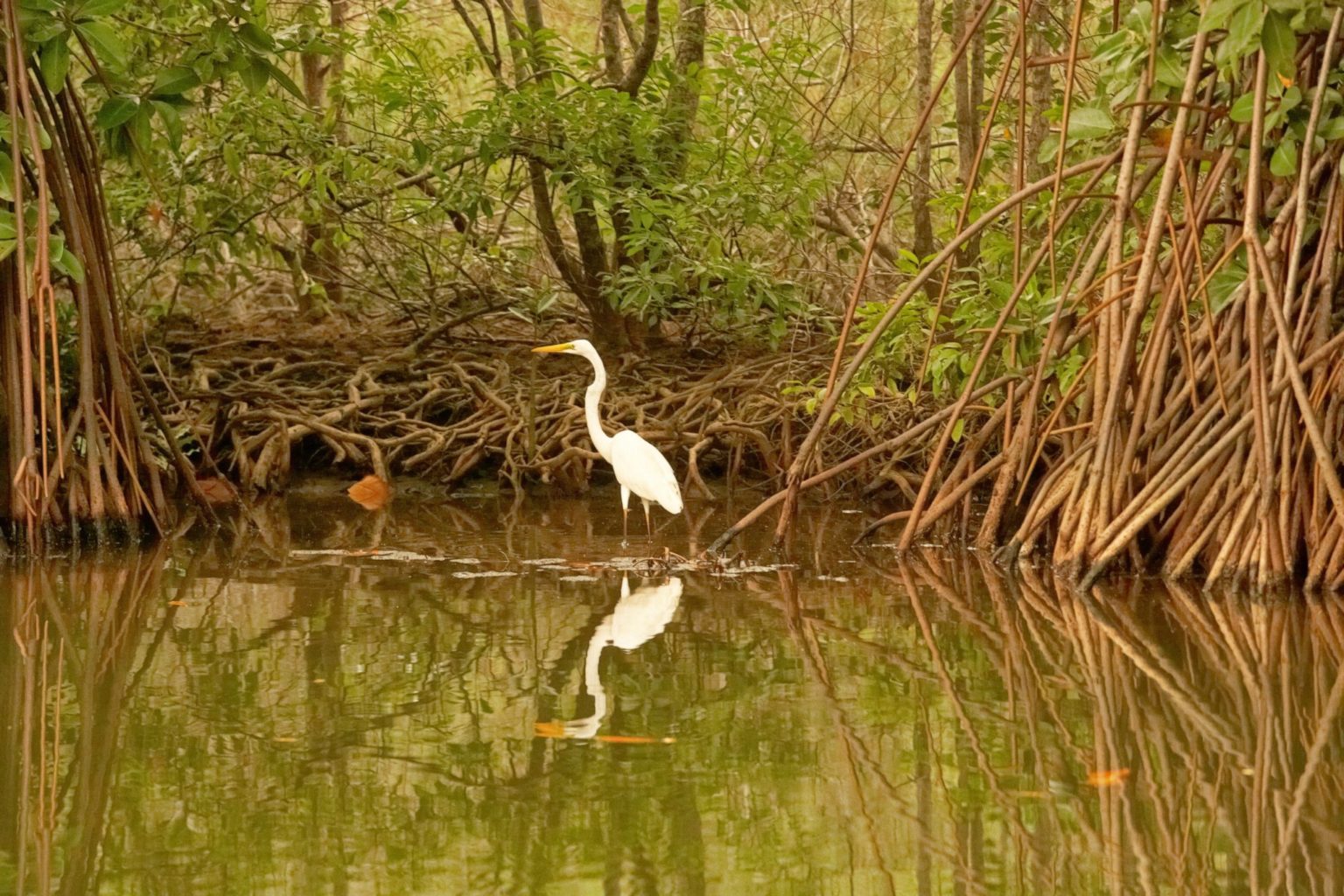 As Sri Lanka’s armed conflict intensified in July 2008, a fierce battle was waged between government forces and the Tamil Tiger rebels over the strategically important coastal town of Vidataltivu in the Mannar district. After heavy fighting that lasted many days, government troops finally captured the area, considered one of the main bases and logistic hubs of the terror outfit.

Now, in 2023, nearly a decade and a half later, a new battle is being waged over Vidataltivu; local environmentalists and conservationists have banded together in a desperate attempt to prevent the government from turning the area — that is identified as a sensitive biodiversity hotspot — into an industrial aquaculture park.

The vast national reserve —  officially named the ‘Vidataltivu Nature Reserve’ — includes land covered in mangroves, as well as a large extent of the Indian Ocean, Sri Lanka’s third largest marine protected area. The unique ecosystem consists of seagrass habitats that are crucial for a number of birds, and the dugong —  a critically endangered large marine mammal.  Vidataltivu is also popular because it is one of the few places where all types of marine ecosystems can be seen in Sri Lanka.

Located in close vicinity to the Vankalai Sanctuary as well as the Adam’s Bridge National Park, the reserve is home to a number of rare species and acts as their breeding ground. Despite minimal mangrove deforestation, Vidataltivu has remained largely pristine and untouched over the years.

This national reserve came into being when the government launched the ‘northern spring’ (Uthuru Wasanthaya) development programme in the war-torn province after the civil war ended in 2009. In 2012,  a Strategic Environmental Assessment (SEA) carried out by experts under the programme identified Vidataltivu as an area requiring protection, leading the government to gazette 29,180 hectares as a national reserve on 1 March 2016 by order of the then Minister of Wildlife and Sustainable Development, Gamini Jayawickrama Perera.

But not a year later, the National Aquaculture Development Authority (NAQDA), a government agency, drew up plans to establish an aquaculture industrial park in the area in a Public Private Partnership (3P), allowing private parties to carry out aquaculture projects, such as the farming of various species including marine finfish, crabs and exotic species of shrimp, in a lucrative project that is expected to raise USD 1.3 billion for the government. The NAQDA said it required 1,491 hectares of land, and three plots of land were chosen — one directly located within the nature reserve, causing great concern to environmentalists.

Speaking to Roar, Director General of the Department of Wildlife, Chandana Sooriyabandara confirmed his department was ready to hand over the required land from the nature reserve for the proposed project. “The land has been demarcated and set aside. The matter is now with the Minister and the Ministry of Wildlife and Forest Resources Conservation,” he said.

But as noted by the Chairman of the Center for Environmental Justice (CEJ), attorney-at-law Ravindranath Dabare, under Section 2 (4) of the Flora and Fauna Protection Ordinance, the subject minister cannot issue an order de-gazetting land from a declared national reserve. “He, of course, must get it passed in parliament for it to be effective,” he said.

Though the land mass proposed to be de-gazetted has now reduced from 1,491 hectares to a mere 169 hectares, environmental experts nevertheless continue to raise serious concerns about the attempt to use the space. They have expressed fears that the move would set a  bad precedent, leading to more land within the reserve being de-gazetted in the future for economically lucrative projects, leading to serious environmental and conservation issues.

Similar aquaculture projects have been called “socio-economically destructive and unsustainable” by — as expressed by conservationist Dr Sevvandi Jayakody in 2017 when the project was first announced — experts, and the project has environmentalists worried that alien species and possible diseases could be introduced to the sensitive ecosystem, thereby causing the loss of indigenous species.

Experts have highlighted the negative impacts that can be caused by pesticides, antibiotics, chlorine and other chemicals, as well as faecal matter from farmed species that can be released into the ocean, leading to a change in water composition, thus affecting the integrity of the marine ecosystems. They have also pointed out that industrial activities can alter the feeding and breeding patterns of species present in the reserve, and that fishermen in the area will also be negatively affected in the process.

Since state interest in the proposed project has not diminished, the country’s environmental crusaders are now making preparations to fight against the destruction of Vidataltivu.

Environmental lawyer Dr Jagath Gunawardana has pointed to many legal obstacles and issues in de-gazetting part of a declared nature reserve, and has expressed confidence that the move can be successfully challenged in the courts.

According to Dr Gunawardana, Section 2 (4) and Section 2 (5) of the Fauna and Flora Protection Ordinance concludes that the legal process of de-gazetting an area once it is decided a natural reserve is inappropriate.

“The Act does not allow for any appeal against such a decision. Going forward, the minister can only issue an order with revised boundaries to de-gazette an area according to the decision based on the concluded study,” Dr Gunawardana said. “Due to this, this plot of land requested cannot be removed from the nature reserve in any legal manner.”

Dr Gunawardana also expressed doubts about the impartiality of the EIA carried out by NARA — which also comes under the Ministry of Fisheries and Aquatic Resources. He said therefore, the EIA can also be challenged in court as a clear conflict of interest.

In addition, Dr Gunawardana noted that if the authorities did indeed manage to de-gazette the area, it would invariably lead to more legal and administrative tussles going forward.

“The project proponent is bound to act in accordance with Section 9 (a) of the Flora and Fauna Protection Ordinance for all development activities carried out within one mile from the boundary of a nature reserve. While obtaining approval, they will have to prepare an EIA and submit it to the public for comment. Later they must obtain approval from the Wildlife Department, based on the public comments and observations,” he explained.

According to Dr Gunawardana, the influx of birds to these aquaculture ponds will give rise to a host of issues, to which the project proponents and even the authorities may not be able to provide solutions to resolve these issues. “Will the DWC be able to act impartially without fear and favour in this scenario? If approval is granted despite the issues, it can be taken to court,” he said.

Highlighting the National Policy on Conservation and Sustainable Utilisation of Mangrove Ecosystems in Sri Lanka, which came into force on 22 January 2020, Dr Gunawardana noted that the policy is part of the responsibility of the national commitment to the environment as assigned in Article 27(14) of the Constitution of the Democratic Socialist Republic of Sri Lanka.

Article 27(14) states that the government must protect, preserve and develop the environment for the benefit of the people. According to Dr Gunawardana, de-gazetting part of the Vidataltivu nature reserve would undoubtedly be in violation of this responsibility.

“The sustainability of a project must be taken into consideration by decision-makers when deciding on a development project,” attorney-at-law Dabre also noted. “Short-term economic gain should not overshadow the negative effects it may have on the current or future generations.” He added that failing to consider this would render the attempt to degazette a portion of the land illegal.

Armed with these legal arguments, the CEJ is now preparing to fight the government in court. “We are highly concerned about maintaining the ecological balance in the area,” Dabare said. “We will heavily oppose any attempt to de-gazette part of the nature reserve and will file an action before the Supreme Court or any other suitable court.”

The current economic climate and the important need for cash flows, however, are not lost to these environmentalists. Considering the biodiversity and pristine nature of Vedataltivu Dr Gunawardana proposes the government take steps to develop tourism within the reserve, thereby replacing the problematic and objectionable aquaculture project. “A part of the park could be opened up for tourists,” he said, noting that this would be a far more sustainable use of land that would also be of economic benefit.