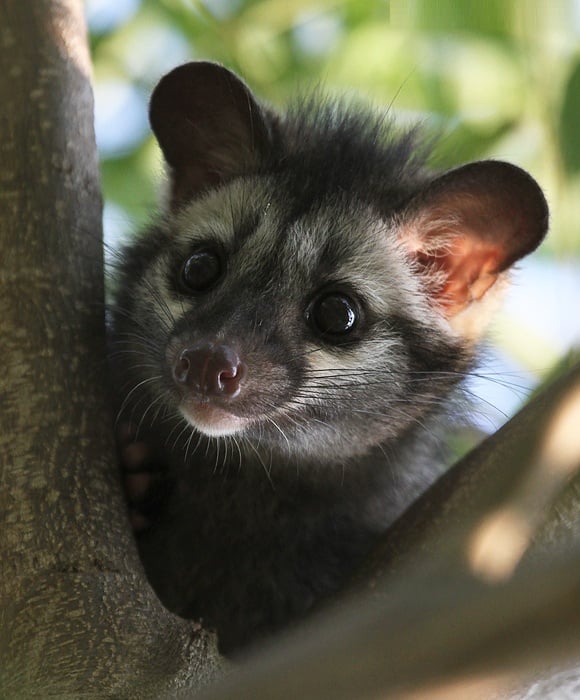 What is a Civet?

The civet—a small nocturnal mammal native to tropical parts of Asia and Africa, is an animal most Sri Lankans have crossed paths with at least once. From causing a ruckus on our rooftops to eating fruits from our gardens, civets are arboreal animals, dwelling in the shadows, just out of sight of humans.

Civets are recognisable when they are referred to as Uguduwa, Kalawadda and Hotambuwa in Sinhala or Maranai in Tamil. These mammals are not befriended by humans and are often ignored as a species that contributes to our island’s biodiversity. Civets easily venture into new environments, often suburban and urban areas, leading them to cross paths with humans. The following are three types of civets found in Sri Lanka.

Golden brown, sometimes dark brown in colour, the golden palm civet is a subspecies of civet endemic to Sri Lanka. These civets are known to locals as Pani uguduwa due to the honey colour of its fur. Though tree dwellers by nature, they also roam jungle floors looking for insects, frogs and lizards to feed on. Their diet also consists of berries and other large fruits.

This subspecies is known to be highly solitary and nocturnal compared to other subspecies of civets. They are distributed across the island, but are limited to a small portion of Sri Lanka where natural habitats still remain. They are often seen in Sinharaja, Sigiriya, Udawalawe, and Yala. A few isolated groups of civets are found in Wilpattu National Park and Knuckle Hills.

Recent work by Grooves et al (2009) suggests that the wide morphological variation in the golden palm civet might actually represent three different subspecies. But the ICUN 2016 list has not included these three as separate subspecies because there is no taxonomic significance and genetic analysis that supports the proposal. The common calm civet is a cat-sized mammal growing to about 21 inches in length and weighing about 3.5 kgs. This civet is grayish in colour, with shaggy hair and three rows of black markings that run across its body and more black marking on its ears, feet and snout. Endemic to the Mentawai Islands of Indonesia, these civets are widely found in the Himalayas, Southern China, Philippines, Malay peninsula and Indonesian islands. It’s tolerance and adaptability to extensive habitat change and degradation has made the its population escalating more than other types of civets. These omnivorous mammals feed on rats, insects and vegetation. Though not practiced in Sri Lanka, these civets are used in the Kopi-Luwak (civet coffee) industry in Vietnam, and kept as pets in parts of Indonesia.

A tawny grey or greyish brown body, horizontal ring marks on the dorsal and a black and white ringed tail is an unmistakable feature of the small Indian civet. Locals call this civet, Urulewa and it is often seen roaming jungles in search of prey. The ICUN red list of 2016 has recorded this species as of least concern, because of it’s ability to thrive even in fragmented and degrading forests.

Of all the civets in Sri Lanka, this is the most predatory. The small Indian civet is also found in India, Indonesia, Thailand, Myanmar, and parts of China. They have also been recently introduced to islands such as Madagascar and the Comoros islands in Africa. They feed mainly on small vertebrates such as rodents, hares and mouse deers, as well as fruit. These civets are reported to be seen in semi-evergreen and bamboo forests, as well as  grasslands, marshlands, and riverine habitats. In Sri Lanka, they are mostly seen around Yala National Park.

Civets and humans have crossed paths for years. Decades ago, the glandular secretions of civets was used in the they produce in the perfumery industry, a practice that has seen drastic reduction due to animal rights concerns, and the rise of alternatives in the market. Civets are also used to produce essential oils in countries like India and Thailand for folk medicine and aromatherapy, to treat hormonal imbalances and psychological health.

In Indonesia, civets are used to produce Kopi Luwak, or Kapi Alamid—coffee beans that are collected from the excrement of civets. Known to be a luxurious and aromatic coffee blend, this industry is rapidly growing in popularity and has lead to many palm civets being held in captivity in parts of Southeast Asia. Civets are also hunted for meat in parts of India and extensively in southern parts of China, which has lead to a decline in numbers in recent years.

Luckily none of the aforementioned practices are common in Sri Lanka, which assures a positive future for the fraction of civets who dwell on this island. Civets in Sri Lanka are legally protected under Act No. 30 of the Flora & Fauna Protection Ordinance, which means anyone caught hunting, capturing, or exporting civets can be punished by law.

Civets may not seem as important as other animals to your average citizen, but every animal on this planet contributes to the balance of our ecosystem.