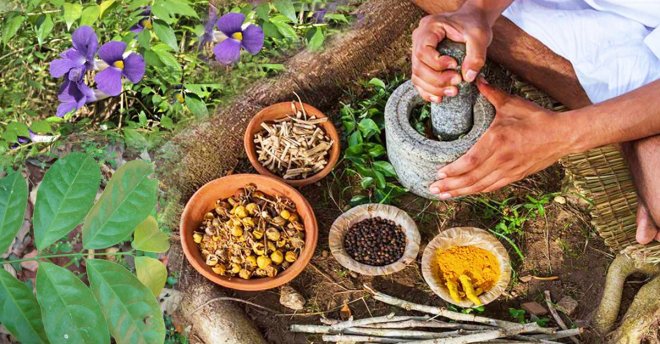 Sri Lanka has a wealth of knowledge, particularly in the field of indigenous medicine. For every ailment, there is a meticulously crafted mix of local herbs, roots, sprouts and stems that promise to help you feel better in a matter of hours.

In a world that has come to be defined by globalisation, the benefits of these remedies are gaining universal recognition. But with that exposure  comes the potential for exploitation. In Sri Lanka, this often takes the form of biopiracy.

Biopiracy occurs when biological or genetic material—such as medicinal ayurvedic plants — are taken illegally from their countries of origin and sold in other countries for commercial purposes.

This consignment was on its way to Japan, where just a few months earlier, a patent that covered all extracts of the plant with anti-diabetic properties was issued. The very same day, a patent was also issued to the United States that covered a compound derived from the kothala himbutu plant.

By patenting these substances, the companies selling them are essentially claiming them as their own intellectual property, excluding others from using, selling and importing the material for a certain period of time. And although each company uses its own funds and resources to derive chemicals from the kothala himbutu plant, the plant is endemic to Sri Lanka, and the methods used to procure the substance took place without the authorisation of the government.

The Power Of A Patent

What happened with the kothala himbutu plant is one of the most well-known cases of biopiracy in Sri Lanka. but there are numerous others. In early February, five Slovakians were arrested and charged for 37 offences under the Flora and Fauna Protection Ordinance (FFPO) of 1937, the Forest Conservation Ordinance (FCO) and the National Heritage Areas Act, for their attempted theft of over 700 families of butterflies, insects and plant specimens.This was the largest ever collection of animals and plants from the Sinharaja Forest Reserve.

While some countries do legally import and give due credit and compensation to the country of origin,  many companies resort to unethical and illegal methods in the search for new biological resources.

“These companies often take monopolistic rights for the compounds they develop, in the way of patenting,” explained Samantha Gunasekara, former Deputy Director of Customs, and President of Lanka Nature Conservationists. “The original country where the material is from is unaware of this, and they do not get proper compensation.”

The acquiring of rights by international companies is one of the definitive aspects of biopiracy, and is what sets it apart from regular cases of biological theft. In the latter, the material is only smuggled out of a country but not subject to patenting, making it possible for the respective governments to cultivate and export the material to foreign markets, if they so desire.

However, when rights are acquired, the consequences can be more serious.

In the late 1970s, the endemic Binara (exactum trivernium) flower was smuggled out of Sri Lanka, and minor variations of the species were later patented by foreign companies. One of these patents covered Maha Binara (eitrinervum macranthum), which is a version of the plant that has drooping stems.

This particular variation can be found in some parts of Sri Lanka. But because the patent identifies it as a discovery, if the Sri Lankan government ever decides to export this flower, it is within the legal rights of the patent holder to stop it from being sold.

“What [these companies] value is the patent and not the raw material,” explained Jagath Gunawardane, a senior environmental lawyer. “The moment there is a patent, it precludes any competitors and so the product can be made only by the patent owner. The supplier of materials has to either give it at a price decided by the buyer or go out of business.”

As a result, the value of the raw material itself — such as the Maha Binara — goes down, and the potential for the country of origin to gain revenue by supplying the product is quashed.

Claiming Rights To Our Resources

Although biopiracy has been occurring in Sri Lanka for decades, there has been  an alarmingly low pushback from the government. Gunasekara, who has been lobbying against biopiracy for over 20 years now, has become disheartened by Sri Lanka’s lack of progress in combating the issue.

“In the 1990s, when I first began fighting this, many countries like India were far behind us in terms of implementing laws to protect us from biopiracy,” he said. “Now, they are far ahead. India has been documenting and patenting their endemic species. Many countries in South America and Africa are also patenting their materials and ensuring they get the benefits.”

Some of these countries have even decided to take their existing cases of biopiracy to court.

In 1995, when two scientists at the University of Mississippi were granted a patent for the use of turmeric to treat flesh wounds, an Indian research organization filed a lawsuit challenging the novelty of the patent. The basis of their lawsuit was that Indians had been using turmeric as a wound ointment for thousands of years. In 1997, the patent was revoked. More recently, India successfully won a lengthy battle against Colgate-Palmolive, a US consumer goods company that wanted to patent an oral composition made from Indian spices and herbs.

However, Sri Lanka has not kept pace.  To this day, no lawsuits have been filed by the government challenging the validity of foreign patents using endemic biological resources.

“There are laws —such as the Flora and Fauna Ordinance— in place, that control the exporting of things like animals or plants. But with genetic material, there have been no laws so far,” said Gunawardane. “For the last 25 years we have been talking about this, but nothing has happened.”

While filing lawsuits and improving regulations around genetics are important, the biggest step Sri Lanka can take in ending this issue, would be to start patenting its own materials.

“At present, patents are increasingly being used as offensive tools, to gain markets and to throw out any potential competitors,” said Gunawardane. “We can take this same concept and use it to our defence.”

But in order to do so, Sri Lanka needs to seriously invest in scientific research.

“Today, tropical countries like ours have become goldmines for foreign researchers,” said Gunesekera. “I think that Sri Lanka has taken such little action on biopiracy cases, because the government feels like they stand to gain nothing from doing so, but this is not true. Just imagine how much money we could be earning if we had universal rights to a remedy for diabetes? That could have been us, because the blueprint is right here in this country.”