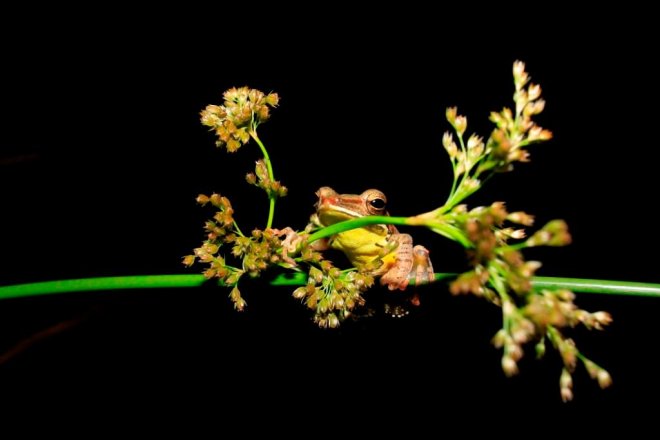 Sri Lanka is home to a surprisingly large number of frogs—to 119 different species, to be precise. Of these, 103 of them are endemic, making Sri Lanka widely recognised as a hotspot for amphibians.

Sadly, they aren’t just endemic. Many of them are endangered and critically endangered. Being highly sensitive to pollution, chemical pesticides, and loss of habitat, are just some of the major threats faced by these amphibians.

For Ishanda Senevirathne, naturalist and author of the book The Peeping Frogs of Nuwara Eliya, frog conservation is a priority. He also stresses on the importance of eco-tourism, and to make tourists (and locals) more aware of the smaller species of wildlife Sri Lanka has to offer. Frogs, he says, are considered a good bio-indicator of the ecosystem’s health. They also play an important part in the cycle of life (and the food web) by being both predator and prey.

Here, Senevirathne tells us about five frogs unique to the central highlands, and how to identify them.

The Montane Hourglass Tree Frog (also known as Günther’s Whipping Frog) is a colourful frog with distinct hourglass patterns on its back, with bright reddish-orange spots. The top part of the frog is a brown and yellowish orange, while its underside is much lighter and can be anything ranging from white to yellow.

The frog has a long, slender body and triangular head. As with several species in the wild, the female is bigger than the male. Their ‘fingers’ have prominent discs without webbing, whereas their toes are webbed with discs.

The females lay eggs in a foam nest attached to ground or in vegetation near bodies of water.

The most widespread shrub frog in Nuwara Eliya, this specie only grows upto 4.5cm in length. It is often light brown or grey with dark brown bands, though they do come in different colours. Some even have an orange-brown stripe running down the middle of their back. Their underside is light brown, and they have rounded snouts.

The female frogs deposit their eggs in humus (soil made of decomposed leaves and other organic material), and the frogs develop directly; skipping the tadpole stage. This type of growth is called direct development.

This frog is miniscule, and grows only up to 2.5cm in length. They have pointed snouts, and, like the Small Eared Shrub Frog, the female lays its eggs on the ground and the babies grow through direct development.

The frogs are predominantly olive-brown, creamish, or pinkish cream in colour. Some of them have a light yellow stripe running down the middle of their back. Their bellies are a mixture of brown and light yellow, and they have red eyes.

Unlikely as it may seem, this small frog has a lumpy body, rather akin to a toad’s. A noteworthy feature is that it also has horn-like warts above its eyes. Coming in a variety of colours from greenish-yellow to reddish-brown, these frogs are great at camouflaging themselves, especially as their skin looks identical to the colour and pattern of lichen. They have light yellow, spotty bellies.

A bright, luminous green in colour with creamy yellow or pale pink underbellies, these frogs lay green-coloured eggs attached under the surface of leaves. Some of them have spots scattered across their upper bodies. Growing only about 2.9cm in length, they are found on top of shrubs where there is plenty of moisture.