Anyone who has lived here for even the shortest time can attest to being bitten or stung by some creepy-crawly or the other, be it those pesky mosquitos or near-invisible red ants marching all around your house. Being a tropical country doesn’t help: not only are we home to a hundred and one varieties of ants, we’re also home to tarantulas, brown widows, centipedes, and more. Some of these are quite common, and can be found crawling out of your bathroom drains, or hiding in a damp corner in your garden. Here we take a look at five of the most painful insects and arachnids to get bitten by in Sri Lanka. A few of them have even made it to the Schmidt Sting Pain Index! The velvet ant, which is actually a wasp. Image courtesy of Judy Gallagher via flickr.

Despite its misleading name, the velvet ant isn’t an ant. It’s a wasp, but the females are wingless and look identical to ants, hence the name. Entomologist Justin Schmidt (who incidentally won a Nobel Prize for creating the Schmidt Sting Pain Index which rates pain caused by insect stings) attested to the wasp having an incredibly painful sting, despite it having low toxicity.

Fun fact about these critters: the female’s stinger is ‘highly flexible and half as long as the insect itself’ and is a modified egg-laying organ called an ovipositor. Male velvet ants don’t have stingers, but can imitate their female counterparts’ attacks—they will ‘aggressively poke you with the pointed parts of their genitalia’ which can feel like ‘little needles sticking into your finger.’ The good news is that these bites aren’t particularly toxic, just really, really painful and capable of giving a sensation of ‘intense burning’ that can last upto half an hour.

The wasps are fuzzy, and brightly coloured, certainly living upto the ‘velvet’ part of their name. According to this paper released by the Butterfly Conservation Society of Sri Lanka, this is a common insect here. 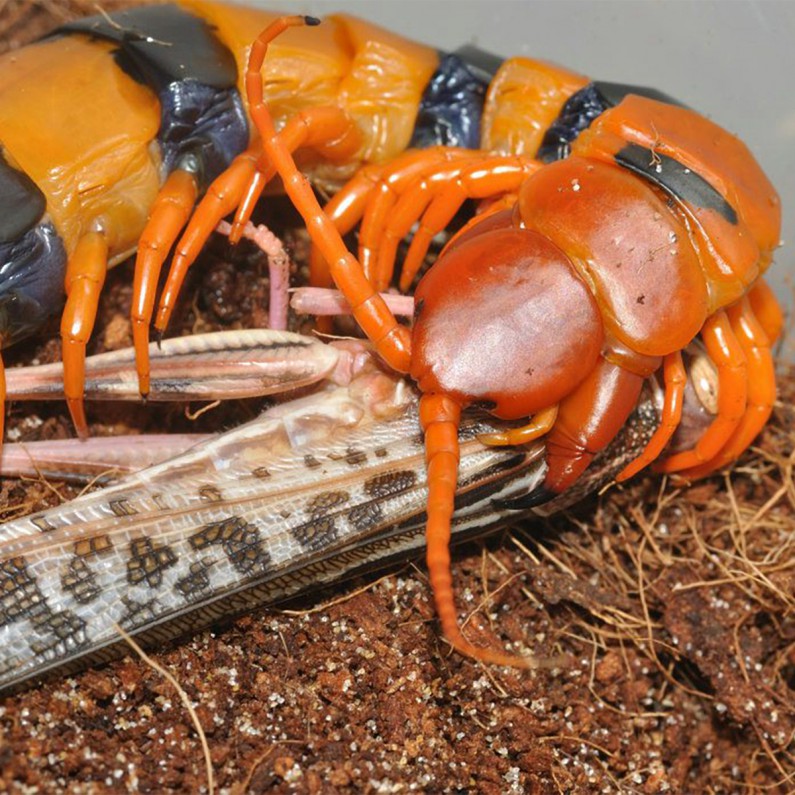 From deep maroon to orange and black stripes, centipedes are colourful and can be vicious. Image courtesy reptileforums.co.uk

You get centipedes that are a foot long in Sri Lanka, no joke. While there are plenty of the smaller, orange-legged species, the larger, darker ones are commonly known as gas paththaaya—’tree centipede’ according to the local vernacular. Their bites can both pack a painful punch, and cause irritation which can often last hours.

The orange-legged centipede is known to be the most aggressive of its species in the world. Its venom can cause extreme pain, including allergic reactions. They are carnivorous, and equipped with forcipules: a modified pair of front legs which double as claws capable of piercing through skin and injecting venom. While the venom itself can cause pain, swelling and numbness, the effects are much worse if you’re allergic to it. Having an allergy to their venom can result in spiked anxiety, rapid heart rates, and difficulty in breathing.

There have been reports of one eating a snake while it was laying eggs, and another study of one ‘pede which was eaten by a snake—but ate its way out of the viper’s stomach.

So basically. Try not to get bitten by a centipede. 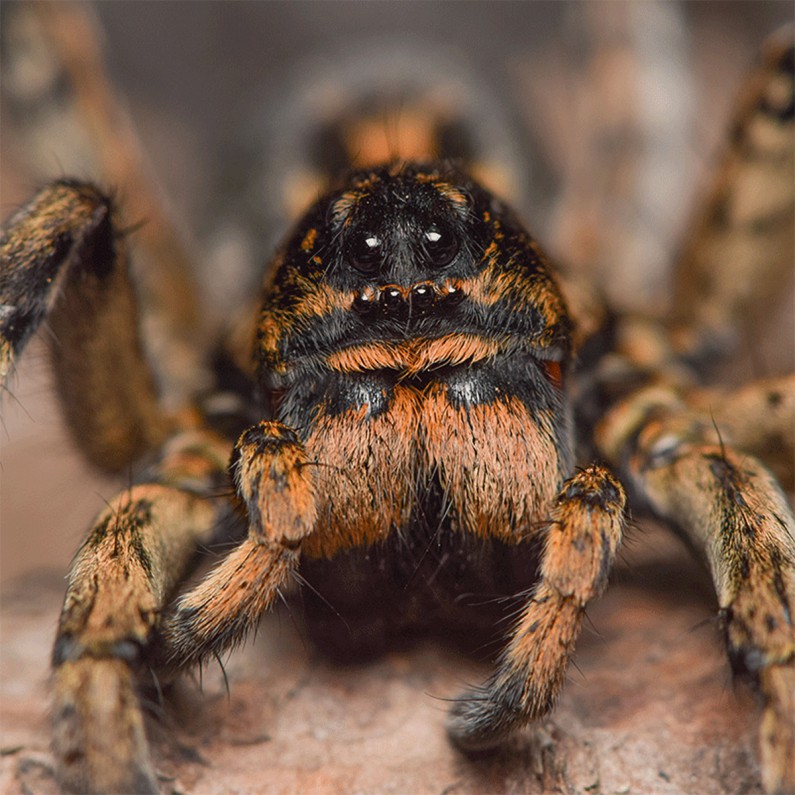 Discovered just a few years ago, this spider is named after a local police inspector. Image courtesy gapyear.com

The Fringed Ornamental Tarantula is one of the 10 most dangerous spiders in the world. While tarantulas in general are safe to have around (they are also kept as pets), this particular one is definitely not for beginners.

Known to be colourful, fast, and venomous, a bite (not into, but by the spider) can result in immense pain and muscle cramps. Not much is known about theraphosid venom but notes from the British Tarantula Society Journal report swelling, numbness, swollen sweat glands, and cramps and pains in more extreme scenarios.

First discovered around 2013, the Fringed Ornamental Tarantula is the second largest of its species and has a leg span of about eight to ten inches long. Also known as the Ornate Tiger Spider, this arachnid has colourful and intricate geometric patterns across its body. Belonging to the Poecilotheria genus, the scientific name assigned to the spider is Poecilotheria rajaei—after a local police inspector. It goes without saying that a sting from this would hurt for a month of Sundays. Everything about it, from the scorpion’s armoured body, upturned claws, and overhanging curved sting screams death. Literally. The Indian Red Scorpion (also found on the island thanks to the IPKF) causes the highest number of human deaths than any other species of scorpion. Some 80 deaths were reported between 2012 and 2013 in Sri Lanka alone.

Currently, 18 species of scorpion have been discovered in Sri Lanka, including the largest and smallest ones in the world. The smallest variety has been named after Saradiel, a local bandit-cum-Robin-Hood.

If you think we have way too many scorpions and will soon be overrun by them, you might be on to something there—a colony of over 2000 was found in Gampaha just a few months ago. 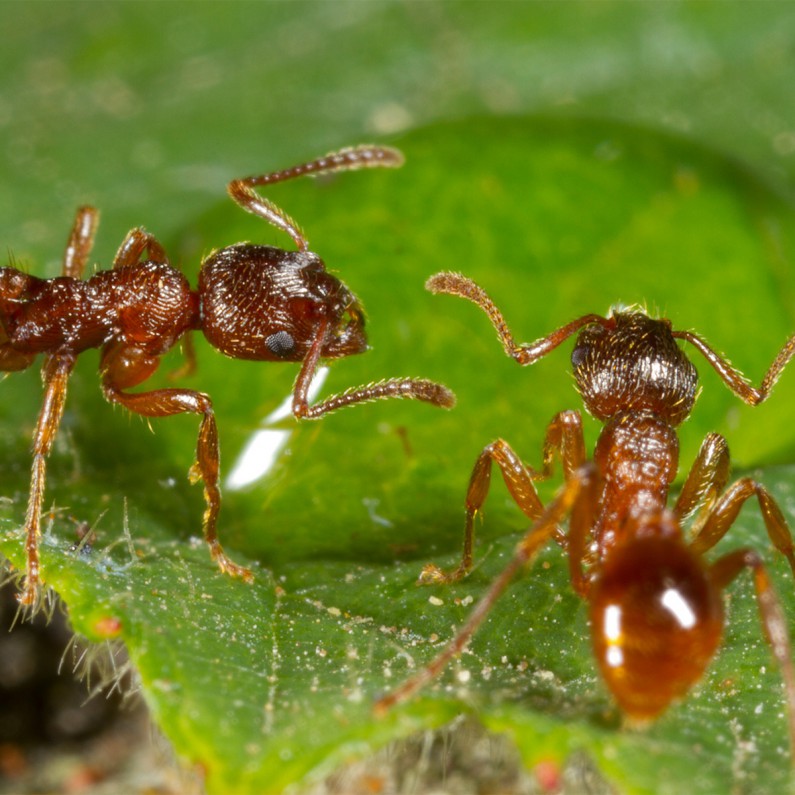 There is a local saying that seven or twelve bites from kadi koombiyo, officially known as dala kadiya or Odontomachus simillimus, will have the same effect (or cause the same pain) as that of a snake bite. In 2010, a woman in Dambulla died following an allergic reaction to one.

That said, deaths due to ant bites are quite uncommon. The pain can vary depending on what type of ant decided to dig its pincers into you; fat, black kadiyos could cause swelling, irritation, and severe itchiness, whereas tiny red ants can cause a pinprick of discomfort. Despite its tiny size, two varieties of ants—the fire ant and the bullet ant— feature in the Schmidt Sting Pain Index…so, just don’t step on them.

Sri Lanka is known as a hotspot for diversity, be they mammals, amphibians, or creepy crawlies. If you’re interested in learning more about the latter, check out one of our old pieces on them.