Coral reefs may cover only a small percentage of the ocean floor, but they are some of the most diverse ecosystems on earth and are home to around 25 percent of the world’s marine creatures. Our island’s coastline, too, is surrounded by many coral reefs—with the Bar reef in Kalpitiya being the largest reef system in Sri Lanka—playing a significant role in the marine biodiversity of our country.

Over past few years, however, these coral reefs have faced many threats. Climate change, coral mining, and dynamite fishing activities are just a few of the reasons why our country’s reefs have time and again been damaged, degraded or bleached, over the past few decades.

What exactly is a coral reef? 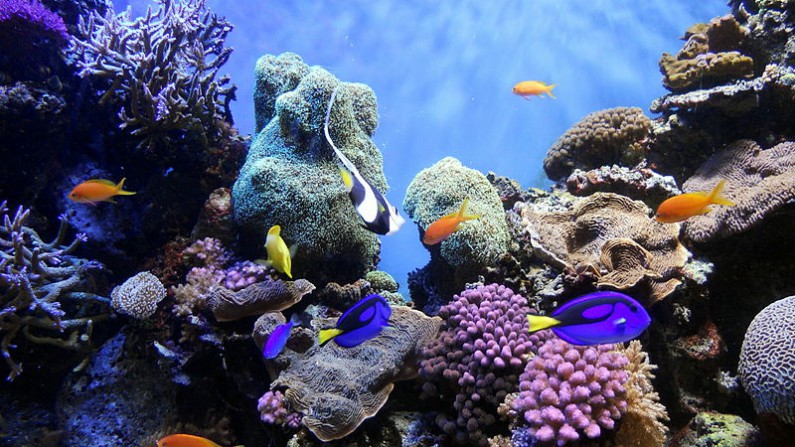 A coral reef is a diverse underwater ecosystem which can provide a home for at least 25 percent of all marine species. Image courtesy wikipedia.org

Sometimes called ‘the rainforests of the sea’, a coral reef is an underwater ecosystem built by colonies of small organisms called coral polyps. These coral polyps slowly and gradually build a limestone exoskeleton on the sea bed of shallow coastal waters, to protect their delicate structures.

Most coral reefs contain photosynthetic algae, called zooxanthellae, that live in the tissues of the coral polyps. Coral polyps and the algae have a mutualistic relationship—the coral provides the algae with a suitable environment and compounds needed for photosynthesis, while the algae produce the oxygen and the nutrients that the polyps need, and help them to remove waste.

It is this relationship between the algae and coral polyp which is the basis of the coral reef ecosystem, providing habitat and food sources for a myriad of different marine creatures. The reefs are also important because they act as barriers which protect coastlines from erosion and other damage that could be caused by rough waves and tropical storms.

What the Law has to say about Coral Reef Conservation Even the reefs within the island’s four marine protected areas are offered little protection due to inadequate implementation of regulations. Image courtesy garitour.com

Regulations enforced under the Amended Coast Conservation Act also led to a 50% reduction in the harvesting of corals for the lime industry on the south-western coast.

Unfortunately, the protection this Act provides is limited to a two-kilometre-wide strip of coastal water around the country. Coastal erosion is just one of the negative effects that can take place due to the destruction of coral reefs. Image courtesy rukshanmaliq.blogspot.com

Speaking to Roar Media, Chathurika Munasinghe, a Marine Biologist attached to the University of Peradeniya, mentioned that the biggest negative impact of the continued destruction Sri Lanka’s coral reefs is the depletion in numbers of marine species. This in turn, she said, would lead to a loss of jobs and income, particularly in the fishing industry.

The tourism sector in our country, too, would be negatively affected by the decline of coral reefs because Sri Lanka’s coastline and marine biodiversity are two factors which make it a favoured location for tourists.

Coral polyps also happen to be one of the largest producers of oxygen in the oceans. Achala Arunalu, President of Reforest Sri Lanka—a group which has decided to take up coral reef restoration projects this year—mentioned to Roar Media that the ecological balance of the ocean will definitely be affected if damage to coral reefs continues.

Even the devastation in Sri Lanka caused by the Indian Ocean tsunami in 2004 has been linked to the destruction of coral reefs—especially due to coral mining. This theory was confirmed in 2005 by Sri Lankan scientist Harindra Fernando, who discovered that greater destruction had occurred in Sri Lankan coastal areas where there was less coral reef cover on the ocean floor.

“We made tsunami models with simulated coral reefs,” Prof. Fernando told the Sunday Times in 2011. “What we saw was that where there was no coral, the surging water increased by a factor of three or more. Put simply, if you take resistance off from a flow, it moves faster.”

The current state of the island’s coral reefs Coral bleaching occurs when the zooxanthellae algae, which live alongside the coral polyps, leave the coral polyps due to an increase in the temperature of the ocean. Image courtesy theguardian.com

Most reefs along Sri Lanka’s coast have faced destructive fishing methods such as dynamite fishing, bottom trawling, coral mining for the lime industry, and pollution through the dumping of plastic and sewage into the ocean. These are a few of the most damaging activities that can degrade and damage coral reefs, and the reefs of Hikkaduwa and Rumassala are only two examples of the reefs which have borne the brunt of these activities

Aside from these harmful human activities, rising ocean temperatures is another negative factor which can affect coral reefs. In 1998, the Bar Reef in Kalpitiya underwent a bleaching event due to a rise in the temperature of the Indian Ocean. Once again in 2016, the Bar Reef faced a similar incident during the ‘Great Indian Ocean Bleaching Event.’

Coral bleaching occurs when the zooxanthellae algae, which live alongside the coral polyps, leave the coral polyps due to an increase in the temperature of the sea. Once the colourful algae are gone, the remaining coral is white, which is why this occurrence is termed as ‘coral bleaching.’ Since the algae provides the coral with 90% of its nutrients, the coral doesn’t have an adequate food source and, unless the temperatures soon return to normal, it dies.

According to Arjan Rajasuriya, Coordinator of the Coastal and Marine Programme of the IUCN Sri Lanka, this reef is now completely dead and no fish can thrive in the waters that belong to this area.

“If the coral reef are impacted from climate change, nothing can be done, as most of the time the coral reefs will be completely destroyed,” Rajasuriya said.

The deal with coral transplanting and reef restoration efforts

Coral gardening involves collecting small pieces of healthy coral, raising them in underwater nurseries and then transplanting them to degraded sites that have been affected by coral bleaching. Image courtesy natureseychelles.org

In 2010, USAID (United States Agency for International Development) funded the first large-scale reef restoration project in the Seychelles and its surrounding regions. The project focused on implementing ‘coral gardening’, a process which involved collecting small pieces of healthy coral, raising them in underwater nurseries and then transplanting them to degraded sites of the reef that were affected by coral bleaching.

But according to Arjan Rajasuriya and marine ecologist Nishan Perera, coral restoration projects aren’t the most practical solution in terms of preserving coral reefs in the long run.

“The benefits of coral transplanting and reef restoration are constantly being debated,” Perera said. “My personal view is that it has some benefits to restore small areas of reef, and to also promote education and awareness. In some areas, where the reef substrate [the layer of calcium-carbonate that is produced by coral polyps] is totally destroyed it is useful. However, it is expensive and is not viable on a very large scale.”

“Small patches of coral reef, like flower beds in a garden, can be created [with these transplanting projects] but we cannot expect to grow a large coral reef. It is an extremely difficult process,” Rajasuriya added.

Another negative factor of coral transplanting and reef restoration projects is that newly established coral colonies need to be carefully monitored. In the year 2000, a coral restoration project in Hikkaduwa was unsuccessful as an invasive species of marine creatures destroyed the newly transplanted corals.

To avoid such problems, Rajasuriya mentioned that the species of coral which is being transplanted needs to be suitable for the selected area of ocean; factors such as climate changes, ocean temperature and invasive species need to be considered before hand. According to experts, the most effective method of conservation is to prevent and mitigate human impact. Image courtesy wikipedia.org

The experts Roar Media spoke to emphasised on the the absolute importance of conserving coral reefs, especially in the light of the lack of coverage coral reef and marine life conservation receive.

“Currently there is no proper coral reef conservation in Sri Lanka,” revealed Perera. “Reefs that are in decent condition are such due to circumstance such as low population and less human impacts in that area, and not because of actual management efforts.”

“The most effective method of conservation is to prevent and mitigate human impact,” Perera said. “Essentially resource management is about managing people and how they interact with an ecosystem. The best way is through MPAs, but these require good management plans that incorporate scientific data and adaptability to deal with situations, and regulations need to be enforced.”

Perera also stressed that management plans of coral reefs need to be transparent and flexible; and enforcement of regulations needs to be implemented, with the help of local communities, as opposed to total dependence on the government system.

“A coral reef is a complex and diverse ecosystem; a certain area of reef will consist of several different species of coral,” Rajasuriya stated. “It is important to take care of the existing reefs. Sometimes, even when a reef does get bleached and most of the corals die, those which remain can slowly repopulate the reef again.”

The expertise of marine biologists and ecologists is necessary for the study of reefs and formulation of the necessary measures which need to be taken to conserve and restore the reefs. But ultimately it is the local community who have most significant role to play.

“Citizens play a big role in protecting the coral reefs. Any conservation effort will not be successful without the efforts of the local community,” Munasinghe stated.

Advocating for better regulations for coral reef conservation, boycotting products that are made with materials such as coral and seashell, minimising coastal pollution and reducing the consumption of threatened marine species are only a handful of the steps we can take to ensure that the beautiful coral reefs survive and thrive. Given the increased threat of global warming, the corals need our undivided attention and care.