There are many reasons why we loved Disney Nature’s epic nature documentary, Monkey Kingdom; the nostalgia-inducing Disney-esque soundtrack, the breath-taking scenery, and the good healthy doses of education, tragedy, comedy, and drama all in one pleasant jumble. We saw the law of the jungle play out, but also caught glimpses of how these creatures are more like us than we could have ever imagined. There were (simian) politics, love entanglements, and even a happy ending! But what probably sent us into raptures the most was the fact that this film was shot entirely in Sri Lanka amidst the sweeping ruins of Pollonnaruwa, with an all star cast of our very own rilawas, the toque macaques. 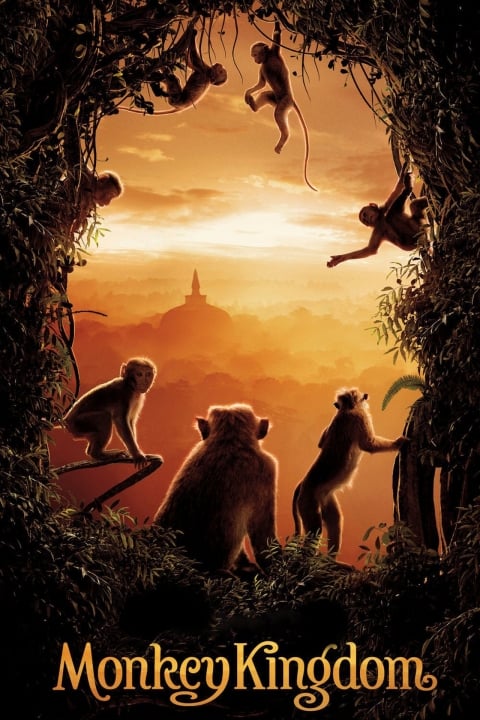 Who says Sri Lankans have never made it big in Hollywood? The 17th of April marked exactly three years since the release of Disney’s Monkey Kingdom which starred our local toque macaques. Image courtesy pelisplus.com

With a worldwide box office record of nearly 17 million USD and positive reviews from critics, Monkey Kingdom was the epitome of edutainment and was quite popular both internationally and here in Sri Lanka. But how many of you have heard of the Smithsonian Primate Research Center in Polonnaruwa? Since we are pretty sure that a lot of you are scratching your heads and wondering what on earth that is, Roar Media spoke to the brains behind Disney’s extraordinary docudrama, Dr. Wolfgang Dittus, Director of the Primate Research Center, to help us learn a bit about it.

Polonnaruwa “Monkey Camp”; What You Need To Know Dr. Wolfgang Dittus with Jane Goodall, who both run two of the world’s longest running studies of primates in the wild. Image courtesy: nature.disney.com

The Smithsonian Primate Research Center—also locally known as the Primate Center Lodge or the “Monkey Camp”—has been around for more than half a century. In fact, without it and its resident primatologist Dr. Wolfgang Dittus, DisneyNature could probably never have been able to get up close and personal with Maya, Kip and the rest of the simian cast of Monkey Kingdom.

Nestled in a patch of forestland on the banks of the great Parakrama Samudraya reservoir, the Monkey Camp was first established in Sri Lanka back in 1977, the successor to two similar facilities which had been functioning intermittently since 1964. Its greatest accolade lies in the fact that it stands shoulder to shoulder with Jane Goodall’s study of chimpanzees in Tanzania as one of the world’s longest running studies of primates—or any mammal, for that matter—in the wild.

So what exactly does the Primate Research Center do?

The center is a multi-faceted one. While it mostly serves as a base for scientists, students, interns and visitors involved in the scientific study of wild primates, it also conducts many educational programs and shines a constant spotlight on conservation. “The station does not have any monkeys in captivity, nor do we perform experiments,” explains Dr. Dittus. “Our research methods involve following monkeys on foot through the forest and recording their natural behaviors, usually by hand-written notes according to scientific protocols.” Hanging out with the monkeys; while the words ‘animals’ and ‘research’ often conjure up images of frightened caged creatures cowering in a lab, this could not be further from what they do. Image courtesy nature.disney.com

Their conservation efforts, which go hand in hand with the center’s extensive research programs, include public education through international documentary films like Monkey Kingdom. On inquiring if our toque macaques have ever made it to the screen in other avenues, we learned that they have had quite a penchant for it.

“We have been instrumental in portraying the fascinating soap opera lives of the Sri Lankan toque monkeys in over thirty high-quality international documentary films, three local productions by Rupavahini, and one off-Broadway stage play in New York and Los Angeles,” Dr. Dittus tells us.

How Was The Primate Research Center Born?

The story of the Primate Research Center began in 1964 with Dr. Dittus’ predecessor, the late Dr. Suzanne Ripley, who came to Polonnaruwa as a student for her Ph.D. thesis involving studying Sri Lanka’s grey langurs. It was her early work, together with the vision and energy of Smithsonian scientists like the late Dr. John Eisenberg, which took root and gave rise to the Smithsonian Biological Program in Ceylon. According to Dr. Dittus, this program was done in collaboration with notable Sri Lankan academics like B. A. Abeywickrama, Hilary Crusz and M. D. Dassanayake of the University of Peradeniya. “This broad-based program involved studies of elephants, primates, insects, fishes, and the ecology of the National Parks,” he says, explaining that apart from the studies, the program sponsored the career development of many Sri Lankan students and scientists. “The present Primate Project is an outgrowth of this early effort and has been developed over the last 50 years under my leadership.”

What Are They Up To At The Moment? After more than fifty years of research, you would think that the center has exhausted all avenues for study, but there still remains vast reservoirs of untapped knowledge to be discovered.

“There are always unknowns to confront the inquisitive,” Dr. Dittus tells us. The motivation behind the years of accumulated research is to unearth new knowledge about the evolution of social behavior in primates and principles of socio-ecological organization. These studies are broad and cover a number of subjects like demography, genetics, immunology, health and animal communication.

Some of the center’s current lines of investigation include a disease that the monkeys seem to have picked up from domestic animals and the phylogenetic history and relationship among the different primates in Sri Lanka and South Asia. Dr. Dittus points out that humans and monkeys have far more in common than meets the eye.

“A comprehensive study of primate biology such as ours offers a window into our ancestry,” he tells us. “It makes us conscious, and helps to define the ancient phylogenetic program that to this day determines how and why we tick the way we do.” 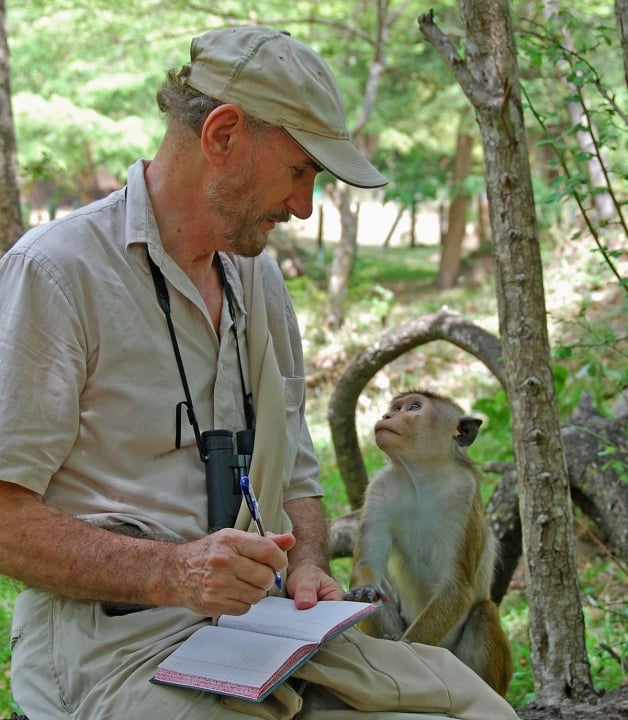 Dr. Dittus has been studying these fascinating creatures for more than fifty years. He’s a zoologist and Visiting Research Professor at the NIFS and the Smithsonian Conservation Biology Institute (USA). He is also the Founder and Chairman of the Association for the Conservation of Primate Diversity. Image courtesy: studiokamy.com.pl

According to Dr. Dittus, research projects like this often face difficulty in avenues like obtaining sufficient funding and administration. However, their biggest challenge by far is communicating and implementing scientifically valid conservation management practices by way of the relevant authorities.

This has proven to be one of the biggest global conservation-related issues in areas where the habitat of humans and wildlife clash. The heroine of Monkey Kingdom Maya, with her son Kip. While we saw them get a happily-ever-after of sorts in the movie, things do not seem to have ended well for poor Kip. Image courtesy: radio.wpsu.org

As of this April, it would have been more than three years since Monkey Kingdom hit the big screens. Most of us who watched the documentary and silently cheered on Maya in her quest for survival are curious to know how the stars are doing. Is Maya—with her gaudy hairdo —still around? And how are Kip and Kumar and the rest of the simian stars? Unfortunately, the news is not all good.

Maya is apparently still alive and not doing too badly, while Kumar has been ousted from his position by another male. “The other members of the Temple Troop clan are going about their normal monkey-business and adapting to environmental changes,” says Dittus. Sadly, Maya’s offspring Kip, who won hearts with his antics in the movie, has died after being poisoned by villagers.

With rapid urbanisation, agricultural expansion and deforestation, the human-monkey conflict has been dramatically intensifying over the last ten years. What makes the matter worse is the fact that the toque macaques are the only endemic species to lack local government protection. Kip’s death is heartbreaking on many counts, but mostly because one of the very creatures which were instrumental in spreading a global message of conservation has fallen victim to the same cycle of human-animal conflict that organizations like the Primate Research Center are trying so hard to end.

This highlights a growing need to heighten conservation methods and develop strategies that will enable us humans and our closest biological relatives to coexist peacefully. With three of our primates listed on the IUCN Red List as Endangered, we need to make people realize the value of our rich biological heritage and see these creatures as more than just pests.