Artist Layla Gonaduwa’s latest project involves a unique 3-month journey across Sri Lanka, made possible through Pro Helvetia’s ‘Home-Not-Alone’ residency. As the island endures the pandemic and a new degree of social alienation, she addresses facets of migrancy from an inter-species perspective, maps ecological threats, the transplantation of alien invasive species, and explores the places where a fragile co-existence can be observed.

Presented by Colomboscope, her journey through the creation of ‘Facing Maha’ has been documented as a short film, giving viewers an in-depth look into the project. In a conversation with Roar, Layla gave us an insight into her project and what it meant to her. 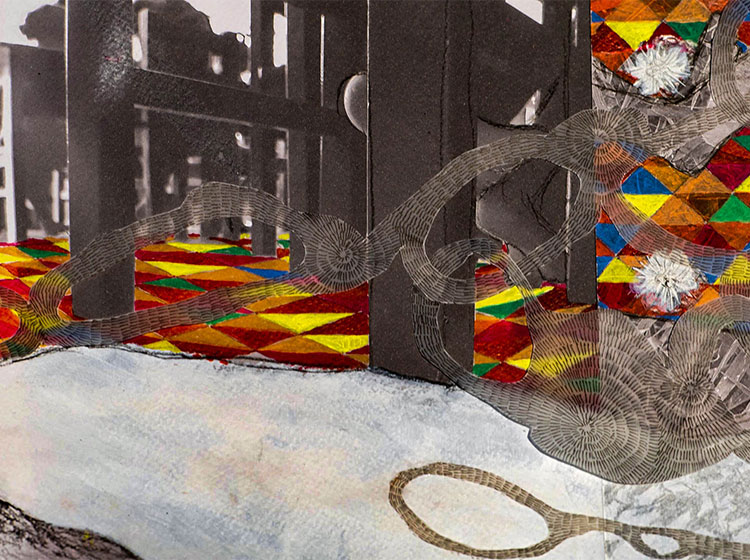 1) You describe yourself as a self-taught interdisciplinary visual artist. Tell us about the nature of your work and what inspires your concepts.

Being an interdisciplinary artist simply means that I am very comfortable handling material of any kind. There is a physicality in most of the work I do. I’d say I’m a haptic artist with a cathartic practice!

All my art is closely related to my life as a woman so my inspiration is the politics related to being a mother and a woman. Unless I have a real connection with my concept, I don’t think I can do it justice. If you take any of my past collections, there is a very real, personal connection with what I was trying to say; if you ask me to talk about something that I’m not directly connected to, I don’t think I could translate it into an artistic form.

2) Give us an insight into the new studio residency concept Home-Not-Alone, pioneered by Pro Helvetia and a sneak peek into your experience.

Each year, Pro Helvetia awards three residences to South Asian artists, and I was one of the recipients this year, along with two talented artists from Pakistan and India. We were supposed to travel to Basel, Switzerland and complete a studio residency inspired by whatever subject we choose – a continuation of our own work, but within this new environment and with the different resources we’d have available.

But all this changed because of COVID-19. So they pioneered a new system and gave us the freedom to reconfigure our concepts to suit the countries we were in. A mentoring platform was available to us around the clock. With the Home-Not-Alone concept, we were still connected as an artistic community for support and to share our thoughts, although we were still physically in our own home countries.

You are home, but you are not alone, because you are connected within this artistic community. It was an incredible opportunity and we were grateful for the way they adapted the programme.

3) Facing Maha was a 3-month on-the-move studio residency. Tell us about the project.

My initial concept was about migration. I was going to start a dialogue between the Swiss people living in Sri lanka and the Sri Lankans living in Switzerland. When I had to rework it, I began to think of migration within our island. There are people who move from place to place and there is politics within this as well – religious politics, caste politics, area politics, and more. It is not always easy to move from one place to another. So I decided that I would use these three months to travel. 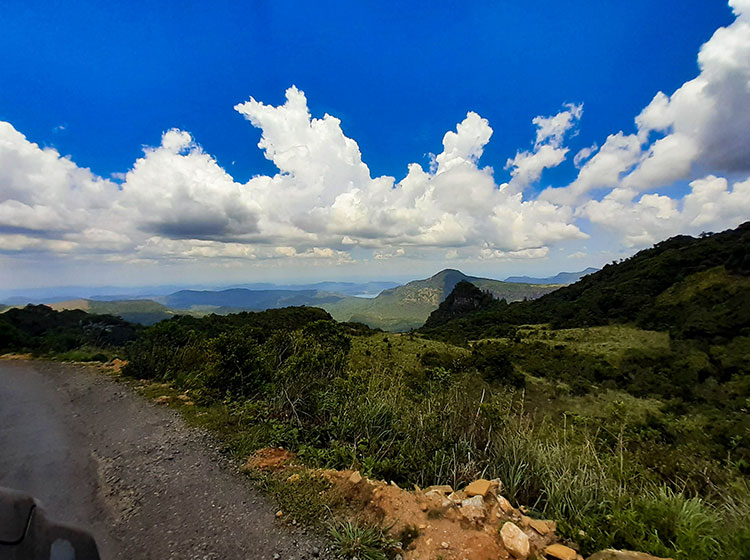 I decided not to venture into urban or highly populated areas. I chose areas people do not normally consider, and settled in. It was all about the land, how the people respond to you and how you, in turn, respond to the land. I was keen to discover the point at which both entities begin to accommodate each other, and to what degree.

There were times that I seamlessly fit in and there were times where it was very jarring and uncomfortable. But when you’re exploring migration, both ecologically and on human terms, this is quite natural. And the stories that came out of it were multidimensional! Not every story was directly linked to migration or movement, but, at the same time, they’ve been inspired by it. I would come back to my studio setup each day and translate it visually into my work. 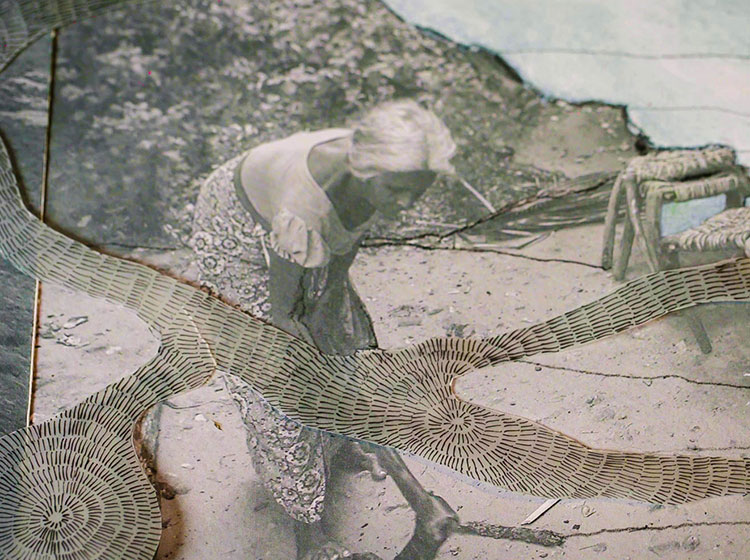 4) What inspired the title ‘Facing Maha’?

During the three months where I was traveling alone, the overbearing thought was ‘okay, there’s a monsoon coming.’ My journey facing the moving monsoon is what inspired the title. For the past few years, this period has always been a flood season in Sri Lanka. Funnily enough, it didn’t happen this time. But, of course, COVID-19 hit this time and I was very aware of this throughout my journey.

I began in August but had to end earlier than planned due to safety reasons. I had set up studio residency on Adam’s Bridge when I had to pack up and come back to Colombo. As disappointing as that was, it was fitting in a way, considering the colourful migration history of Adam’s Bridge in relation to the theme of my work!

5) Are there any experiences that stood out during your journey?

Each story was unique in its relevance to migration and species spread. Our island’s geographical location makes us a web of cross-roads. There has been forced and unforced migration, from pre-colonial times to the times of civil war. I came across seasonal migration several times, especially within fishing communities. I came across resettlement purely based on having a strong presence of ethnicity in the greater Mahaweli areas towards the East. Though it happened a generation back, the people are still not completely one with their surroundings. I came across villages who had to abandon their natural water rights to be forcefully resettled in areas where bousers bring them water in the name of development.

In one of the areas, a conversation was sparked on the fact that we had a king who was half-Muslim and half-Buddhist, who is now inferred to as a god. Everyone prays to him on their way to work; they get their blessings.

But although history books have been rather silent about his existence, I decided not to pursue just his story. I wanted a different approach. I was fascinated by his mother, a woman who would have been alienated in a Sinhala Buddhist royal court, and tried to imagine what her sentiments were. She was a Persian lady who was born here in Sri Lanka, and the existence of this made the community face the fact that we had a very strong Perisan or Mohammedan presence in this country from the Anuradhapura era. It was a simple matter of each community having their expertise in different areas. One was adept at trade and traveling the seas, while the Sinhalese were more inclined towards agriculture and other things. Therefore, a symbiotic relationship was formed and both communities thrived. With our country being an island of crossroads, these are important things we have to consider. 6) What makes Facing Maha new and different – what sets it apart?

The biggest difference was that I had external help this time. Most of the time, artists simply have a singular vision for our art, but with this process, your understanding is of not just one, but many people. Also, it’s not easy being alone for three months. Travel had its difficulties; you’re constantly changing yourself, adapting to new places and new people, and it can be very exhausting. With no concrete plan, completely unexpected experiences come your way. So, when I felt like I needed to speak to somebody, I logged on to the international platform. This gave me both an outlet and an open platform for sharing ideas.

7) Produced by Fold Media, Facing Maha is to be featured as a short film at Colomboscope 2021. Tell us about the film and the experience.

It was actually the very talented Natasha Ginwala who suggested creating a short film. At one point, I was happy to do just the visual work and present it, but I’m constantly told that my photography is not the greatest and I don’t have any of the details on all the work I do! So Natasha was adamant on documenting the work, deeming a short film to be most ideal, and this became a truly exciting part of the experience.

With the announcement of the film, I believe they wanted to give a hint of what I was doing. Although I’m still putting some of the actual pieces together, the film is quite detailed and goes in-depth into what the work looks like. 8) In your opinion, what is the impact of a festival such as Colomboscope in Sri Lanka?

I think Colomboscope has always been a groundbreaking venture for art in Sri Lanka. And in these times of social alienation, having an independent platform like Colomboscope, that has evolved their format, gives artists from around the world a unique platform to showcase their work. I think this is amazing. Considering the times, they’ve done a brilliant job in adapting.

9) How has Facing Maha impacted your journey as an artist?

With Facing Maha, the experience was everything. Be it ecologically or on a human level, if there are weaknesses in any system, any new entrant is going to find those weaknesses, and a way to fit into the system. How they do so depends on the species itself. I think this is the law of nature; we can’t fight it.

When the bees arrived in the new world, they were an alien species. There is no record of how much they displaced, but we now know that they are essential to the world. Sometimes, you need timely agitation to revive, restore, and resurrect a slagging system. That might be the way we survive, so we need to change the way we look at migration and movement of species. This experience made me realise that when we look at the alien invasive species, we need to take on a more pragmatic view. Apart from this, my work tends to be multilayered and it definitely requires engagement to be discovered. This project, along with the reach that comes with Colomboscope, has definitely given me a wider platform and wider audience to engage with. It has given me more opportunities to take my art forward.

Facing Maha conflates photography, collage, text, and drawing to compose an immersive scroll that is unveiled in this short film for the first time.