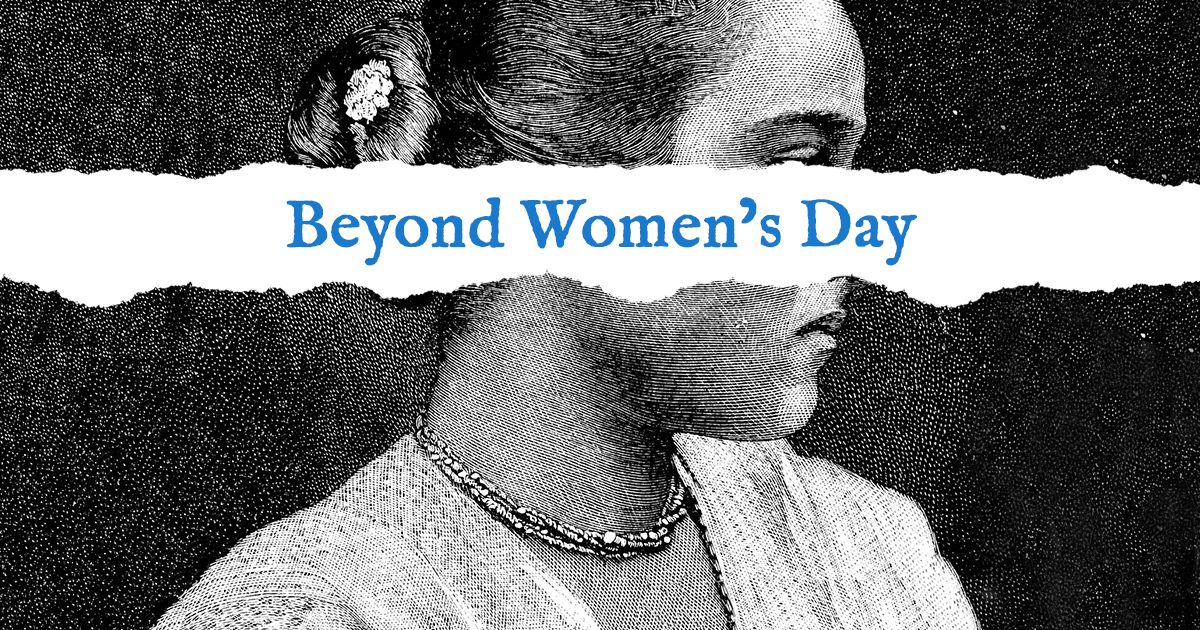 Last year, Roar celebrated International Women’s Day by bringing to attention some significant issues women in our country continue to face. Despite sustained efforts by lobbyists and activists, Sri Lankan women continue to endure power imbalances, discrimination, and marginalisation across communities and industries.

This International Women’s Day, we continue our commitment to drawing attention to women who deserve recognition that lasts beyond a single day. We want structural and institutional reform that will fundamentally change how women are perceived and treated in society so that there is real gender equality.

The continued undervaluing of womens’ contributions to society and limitations on their autonomy makes any progress towards gender equality hard. And while celebration, on a day like this, is welcome, and necessary, we will continue our support of women #BeyondWomensDay so we can achieve equal opportunity for all. The seemingly happy faces of tea plantation workers plastered across rows of immigration counters welcome you to Sri Lanka. Smiling wide, eyes wincing in the sun’s glare, baskets on their back, there is nothing in this exoticised image to suggest that these women — and approximately 500,000 more just like them (not to mention generations before them) — have been subjected to meagre wages, inhumane working conditions and political marginalisation from the moment their ancestors set foot on this island, nearly 200 years ago.

The fight for fair wages has been long drawn out, and in recent years, frequently subverted and undermined by bureaucratic powers, plantation owners and opportunistic trade unions. Despite female estate workers constituting a decisive majority, they remain largely underrepresented in leadership positions within unions and in negotiations with the government and plantation owners.

In response to increasing pressure for fair payment, the Wages Board decided to increase the daily wage of plantation workers to LKR 1,000 on 8 February — which includes a basic daily wage of LKR 900 and a budgetary allowance of LKR 100. The increased daily wage does not come without strings attached — the total amount of LKR 1,000 includes the employees’ contribution to ETF and EPF, a practice that is not applied to any other workers in the public or mercantile sectors.

The fight for a LKR 1,000 daily wage began in 2015, and by now is too little, too late. Living costs have risen sharply, and the six–year struggle to eke out a liveable daily wage has rendered the initially proposed number inadequate by today’s standards.

Plantation companies have said they do not have the capacity to comply with the decided wage increase, and may consider legal action. In 2020, the tea industry made LKR 230 billion from exports alone.

Female plantation workers make up more than 65% of workers in Sri Lanka’s tea industry, which accounts for more than 14% of Sri Lanka’s total exports. How do we incorporate their struggles into our lives to ensure our celebration goes #BeyondWomensDay? Sri Lanka has a long tradition of having more female teachers in the public and private school systems than men. At present, studies show that there are 71% female teachers in primary and secondary schools, in what can be argued is a decided feminisation of the education sector.

But this has also created a stereotype of women as teachers, while men are perceived less in such roles. This feeds into the larger problem of gender-specific job roles leading to  unequal opportunities and discrimination for the working woman.

Furthermore, despite the majority of teachers being women, a significant number of schools have no proper sanitation facilities and about 500 schools have no flowing water. This, Sri Lanka Education Forum has highlighted, has had a significant impact on teachers who have to suffer through monthly menstrual cycles — a topic that is rarely discussed.

According to the Sri Lanka Education Forum, teachers were not considered a priority group in the country’s COVID-19 vaccination programme, an issue highlighted by many trade union organisations.

Furthermore, studies have revealed that a majority of girls who enter secondary or higher education select Arts subjects, leading to a lack of women in STEM subjects (science, technology, engineering and mathematics). While the conversation around this has significantly grown in recent times, going #BeyondWomensDay, how can it be changed in the long run? Over the years, as various political and social movements have ebbed and flowed in their definitions of what do and do not qualify as empowering or progressive, the term ‘housewife’ has come to assume a number of negative connotations. But when the extent of unpaid care and domestic work housewives do are taken into account, their contributions to the wider economy and society — as well as the lack of compensation for the work they do — become much more evident.

An area long ignored by economists, unpaid care work is an area of labour disproportionately undertaken by women. The term refers to all unpaid services provided within a household for its members, and includes caring for people, domestic chores and voluntary community work. In South Asia, women undertake between 80–90% of total care and domestic work in the economy.

Because the labour housewives do in their capacities as spouses and maternal figures are often conflated with notions of selflessness and devotion, it is generally assumed that this work is ineligible for financial compensation. Notions of ‘care’ and ‘work’ seem incompatible with one another, and unpaid care and domestic work are not included within economic census and development policies.

This key exclusion results in labour statistics that are highly skewed. For example, in 2020, the labour force participation of women is 34.3% — almost half that of men (65.7%). Of 8.1 million persons considered to be ‘economically inactive’, 73.9% are women. In contrast, 60.5% of women and 4.9% of men participate in housework.

Women perform care work that is an imperative form of labour, yet is unrecognised for its economic value. How will conversations around and structural responses to unpaid care work go #BeyondWomensDay? By the end of 2020, approximately 90 deaths have been reported among Sri Lankan migrant workers, who died overseas from COVID-19 — a majority of whom were women.

Despite their significant contribution to Sri Lanka’s economy (their remittances accounting for the second-largest share of the country’s foreign exchange earnings: 8% of the Gross Domestic Product in 2019) the government’s repatriation process for migrant workers has been slow. For many, it has been a struggle to find money to return home and pay for flights and quarantine, and in some extreme cases, these workers have experienced alienation from their embassies and high commissions that forced them into dire situations despite the ongoing pandemic.

According to the United Nations, 49% of Sri Lanka’s approximately one million migrant workforce are women working in low-skilled occupations mainly as ‘house-maids’ in Middle-Eastern countries.

Here, they face problems ranging from adjusting to a new language and culture to problems of little or no access to basic necessities. Many of these workers become subsequent victims of forced prostitution and human trafficking, crimes Sri Lanka is ill-equipped, as many critics would say, to deal with. However, among the most common forms of discrimination, exploitation and abuse that migrant workers face comes through violation of employment contracts, arbitrary terminations, poor working conditions, sexual harassment, violence and rape.

A recent report by The Guardian revealed that over 6,500 South Asian migrant workers have died in Qatar during the period of 2011-2020. Out of this, 557 individuals were from Sri Lanka, many of whom were low-skilled workers engaged in infrastructure projects in preparation for the football world cup tournament in 2022. This is but the most recent case where the ill-treatment of migrant workers made headlines. Will these reports, exposures and revelations help change the existing system #BeyondWomensDay? On average, street cleaners, regardless of their gender, earn between LKR 500 to LKR 700 per day, amounting to roughly LKR 24,000 monthly. Despite not being technically classified as poor, the predicament the city’s street cleaners face is a completely different story.

Part of the picture of urban poverty, street cleaners exist in society as ‘residual humans’, engaged in gruelling labour on a daily basis. Malnutrition and a self-perpetuating cycle of servitude are predominant in their lifestyles. Going #BeyondWomensDay, can we expect better conditions and recognition for street sweepers? Transgender women face severe marginalisation in Sri Lanka, with their families often refusing to accept their gender identities, as well as extensive and often life–threatening discrimination when it comes to employment, housing and healthcare, as well as being key targets for unchecked police brutality.

Outwardly presenting their gender identity is not an easy process for many trans youth, who face backlash as a result of the conservative values and beliefs of their communities. Resources and counselling opportunities are also unavailable, particularly in rural areas, which can lead to severe alienation and mental health issues.

Bureaucratic and medical processes to do with gender confirmation in Sri Lanka are complex and often insensitive. There are instances in which psychiatrists have discouraged patients from physically transitioning and attempted to convince them to live as the gender assigned to them at birth. While hormone therapy is available in Sri Lanka, genital reconstruction surgery is not available in the country, and many trans people do not have the means to travel abroad for the surgery.

To legally change one’s gender is an arduous process — there is no clear procedure to do so, and applicants may face unnecessary delays and interrogation as a result of discrimination. Trans people also face extensive physical and sexual abuse at the hands of the police and are frequently detained for no cause, despite no existing laws criminalising transgender persons. Despite this, the police frequently use existing offences to target trans people, including the Vagrants’ Ordinance, which prohibits acts of ‘gross indecency’.

Trans people have found comfort in communities they have formed within Colombo, where they feel people are often more open and accepting. These communities act as networks of safety for trans and gender non–conforming people to openly express their identities and seek support.

Trans women are subjected to harsh social scrutiny, medical insensitivity, and numerous legal obstacles for simply existing within their gender identity. How do we better include trans womens’ safety and concerns in the fight for equality #BeyondWomensDay? Countless mothers in this country have been forced to look for their sons and daughters who went missing since the 1980s — many of whom continue to search for their loved ones.

According to UN reports, Sri Lanka records the second-highest number of disappearances with between 60,000 and 100,000 people vanishing since the late 1980s.

These include mass disappearances of those who surrendered at the end of the armed civil conflict and post-war allegations of enforced disappearances. Groups such as Amnesty International have warned of such disappearances becoming institutionalised. Meanwhile, women who have spent years in search of their missing loved ones have had to face state attempts to conceal information or a complete disregard to conducting investigations.

The mothers and other relatives of the disappeared continue their fight on two fronts; the Association of the Relatives of the Enforced Disappeared is a non-governmental organisation, made up of mothers and relatives, lobbyists, and activists primarily focused on disappearances that took place in the Northern and Eastern Provinces. Many of the mothers who are part of this group started searching for their missing children almost all by themselves at first, but now are supported by advocates and facilitators. The second group is focused on the mass disappearances that took place in the southern part of the country, during the 1980-1990s.

By 2020, almost 70 mothers reportedly died due to stress and various illnesses without finding solutions to their grievances. Going #BeyondWomensDay, how can we work towards helping them find the answers they seek?