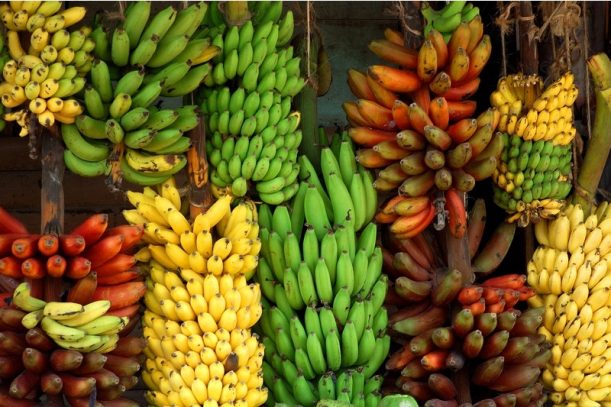 It is one thing to be called a Banana Republic politically, but quite another to be a Republic that is in fact teeming with bananas of different shapes, colours, sizes, textures, and flavours. The latter is certainly true about Sri Lanka. We live among a large and tasty dynasty of bananas!

Our relationship with bananas dates as far back as 341 A.D. when King Buddhadasa, known as a good physician, recorded in his Sarartha Sangragaha, the medicinal value of various parts of the banana tree. Despite this age-old relationship, however, we suspect that there are a couple of things to be said about our banana friends, which many of us may be unaware of.

Firstly, the banana “tree” is in fact not a tree; it is a herb that grows up to several metres tall. Its trunk does not develop persistent woody tissue, but is instead composed of tightly packed leaf sheaths.

Secondly, and more interestingly, bananas are not just fruits, they’re berries! (Didn’t see that coming did you?) Botanists define berries as simple fruits stemming from one flower with one ovary. A berry typically has several seeds. Have you ever stopped chomping to examine the tiny seeds of a banana? Experts unanimously agree on bananas being berries. So, we figured, since there is zero debate on the subject, it is time we, who boast of such long-standing good relations with bananas, started eating more knowledgably.

Thirdly, there is a (technical) difference between a “banana” and a “plantain” (although it seems in Sri Lanka, we use the two terms interchangeably): a banana is considered a “dessert variety” of the genus Musa, while a plantain is considered a “cooking variety” of the same genus. As an aside, it may interest you to know that the 18th century Swedish botanist, Carolus Linnaeus named the species “Musa” after Antonius Musa, a Roman physician. As for the distinction between bananas and plantains, you are excused for not knowing this little tidbit as, according to botanists M. F. Chandraratna and K. D. S. S. Nanayakkara, the distinction between bananas and plantains “is not emphasized in banana growing countries [such as our own], and possesses little systematic justification.” We are happy to ride on this statement, and use the term “banana” in this article, to cover both dessert and cooking types.

The origin of bananas is placed in Southeast Asia, in the jungles of Malaysia, Indonesia, or the Philippines, and it is believed that the earliest written reference to bananas is in Sanskrit, around 500 B.C.  However, archaeological findings show that a wild, seeded, ancestor of the modern banana formed part of the diet of Sri Lanka’s Balangoda Man, who inhabited the jungles of Batadombalena around 10,000 BC. Bananas are also said to have been cultivated in the Kuk Valley of New Guinea in about 5,000 B.C.

When Alexander the Great invaded India in 327 B.C. his soldiers are said to have seen extensive plantations of bananas in the Indus Valley. It was, in fact, Alexander the Great who took bananas to the West, while Arabs/North Africans are credited with having given bananas their present name (the word “banana” is derived from the Arabic word “banaan,” which means “finger”). As an aside, while certain scholars hold that the word “averi” is the Sri Lankan equivalent for “hands” (which ties in nicely with the Arabic “banaan” concept), we do not have any concrete evidence from within the Sinhalese or Tamil vocabulary to back this position. In any event, Islamic literature shows that Arab traders popularised the habit of consuming bananas along their trade route. Later, the Dutch, Portuguese, and Spanish caught on, resulting in bananas becoming the worldwide superstars they are today.

According to the Department of Agriculture, many varieties of bananas grow freely all over Sri Lanka, all year round. They are cultivated in large, medium, and small-scale orchards, and in home gardens.

While there are said to be almost 1,000 varieties of bananas in the world, which subdivide into about 50 groups, Sri Lanka boasts of 29 varieties, the greater number of which appear to be indigenous to the country (although several are said to have been brought from South India, or scientifically introduced to Sri Lanka).

Ambul bananas are famous for being slightly sour but beautifully sweet at the same time. They are petite and slender, sharp-ended, and easy to spot in a crowd. Their skin is relatively thin, covering pale yellow smooshy-soft deliciousness. Best of all, they give out that pungent aroma we all love. According to Sri Lankan tradition, the ambul banana is said to help food move through the digestive tract, and is also considered to be “cooling.” It is therefore not recommended for when you have a cold or a chesty cough.

Seeni bananas are similar to ambul in that they too are small in size. However, they are rounder in shape, and taste distinctly sweeter. The flesh of a seeni banana is sticky-sweet. Its skin is thin, rubbery, apple-green in colour when unripe, and buff-yellow when ripe. These bananas are nutrient-rich and, according to Sri Lankan tradition, recommended for the sick, the elderly, and the very young. It is also believed that these bananas are beneficial to those suffering from diabetes and other “sugar” related problems (although the medical and/or scientific accuracy of this belief is yet to be established).

While the kolikuttu group of bananas are the stout, plump, blunt-ended cousins of the banana varieties described above, kolikuttu and suwendel bananas are the most highly prized dessert banana varieties in Sri Lanka. Kolikuttus are the choice for offerings and religious festivals. They have a thinner skin, which splits during early ripening, and their creamy-white flesh gives out an appetizing aroma. While they are very much in demand, ripe kolikuttu bananas drop readily from their bunch, making it difficult to transport them. According to local beliefs, kolikuttu bananas are “heaty,” and are bring about constipation. Their counterparts, suwendel, are almost apple scented, and their skin is mustard-yellow in colour, when ripe.

The puwalu banana is a slightly less common dessert variety, which takes a curved shape, and whose skin is yellow-tinged brown in colour, when ripe. Its flesh is straw-yellow. Its very attractive counterpart, rath kehel, is famous for its red pigmented skin. The rath kehel is truly a banana of colour, as it’s skin is apple-green when unripe, and turns buff-yellow, and then red, developing brown-black markings, when ripe. Its flesh is sea-foam yellow, and hides within it its minute seeds. It is not terribly sweet, but is certainly softer and sweeter than some banana varieties. Some would, in fact, say it is slightly raspberry-esque in flavour. Interestingly, the red pigment implied in its name only occurs in its vegetative parts (such as its skin) and not in its flesh. Rath kehel is commonly cultivated in Kandy.

Anamalu is a local favourite and belongs to the Cavendish group. It is easily distinguished by its slender, long, curved, shape. Its skin, when ripe, is lemon-yellow, and relatively thick. Its flesh is soft, ivory coloured and sour-sweet on the tongue. It is well loved by athletes in Sri Lanka, for its ability to generate a quick burst of energy. It is also of particular use to those suffering from digestive problems. It is said that over-ripe anamalu can help stop diarrhea, while under-ripe anamalu can help ease constipation. Medicinal qualities aside, anamalu is simply one of those great varieties of bananas you have to love if you are Sri Lankan.

The embon is a dessert variety of excellent quality, again, belonging to the Cavendish group, and therefore rather large in size. It was introduced by the Department of Agriculture in 1927, from Serdang, Selangor, in Malaysia. It is curved (though slightly less curved than the anamalu) and its skin is relatively thick. Although its skin is light green when unripe, it turns buff-yellow at full ripeness. Its flesh is maize-yellow.

The nethrapalam however wins, in this group of bananas, for its tremendous stature. Each nethrapalam banana could be up to 12 inches long, and weigh between two to four pounds! While the nethrapalam is certainly less common, it is by far the easiest to recognise, and the hardest to consume on your own (in one sitting!).

We finally come to bin kehel, which is synonymous with the world famous Cavendish banana. The Cavendish banana, also known as the Canary Island or Chinese banana, is the only kind of banana many from the West have ever tasted or even heard of. While the original home of the Cavendish banana is said to be Southern China, the Sri Lankan Cavendish, or binkehel, was possibly derived from an introduction from Mauritius, which took place not later than the early 20th century.

It must be said, however, that Sri Lanka, along with many other tropical banana growing countries, remains largely unenthusiastic about the famous Cavendish banana. In fact, our favourite botanists, M. F. Chandraratna and K. D. S. S. Nanayakkara, sum it up nicely in saying that the “pre-eminence of the Cavendish as a commercial banana… in most other countries into which it has been introduced is difficult to reconcile with its unimportance in Ceylon.” But can anyone with any inkling of the delicious varieties of bananas that grow in Sri Lanka, fault us for being positively underwhelmed by the waxy, seedless, thick-skinned Cavendish?

In addition to all the delightful dessert banana varieties that grow in Sri Lanka, this island is also home to a number of cooking banana varieties or “plantains.” The most popular cooking banana variety in Sri Lanka is, of course, the alu kehel. It is a variety which remains grape-green in colour even when ripe, is slightly curved, with prominent angles and thick skin. Interestingly, the alu kehel is the earliest edible variety of banana specifically mentioned in Sinhalese literature. Local tradition holds that the cooked fruit, and even its skin, when cooked, has tremendous benefits, especially in relation to digestive health. Other cooking varieties of bananas found in Sri Lanka include etamuru, hambanpuwalu, marathamana, mondon, and sambel.

Bananas are a time-tested source of good nutrition. While we have outlined a number of “traditionally held” benefits of banana-eating, specific to the particular varieties grown in Sri Lanka, we would have you know that there are countless general benefits of banana-eating which are universally held. A few such benefits, not limited to any particular variety of banana, are set out below for your enjoyment:

On a lighter note, we also stumbled upon a wealth of great banana-related fun facts. Here is our pick of the best of them:

If you are one of those rare Sri Lankans who are tired of eating fresh, ripe, delicious bananas, or your mother’s famous alu kehel curry, or kehel muwa (banana flower) stir fry, we would encourage you to try to get creative with your banana-eating. After all, the world is raving about this “superfood,” and here you are, letting the most exotic varieties of banana vegetate on your kitchen counter.

Try incorporating bananas into your breakfast smoothie, or muffin. Or enjoy a ripe kolikuttu or two by using it to make healthy cookies. Yes, you heard right. Now that you have made it this far, consider it your moral responsibility to try the recipe below, courtesy of Jayani C. Senanayake (because these cookies are to die for!):

Bananas – 2 ripe, medium-sized (kolikuttu or any other sweet variety)

The next time you visit a wet market in search of nourishment for the week, be sure to sample a few different kinds of bananas – now that you can tell them apart!