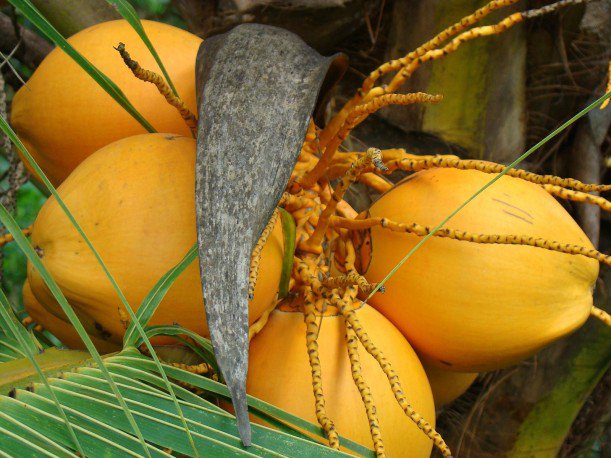 You are out walking on a sweltering day. Your throat is parched, sweat runs off you in rivulets, and you are just wondering if you will be able to make it to your destination before dying of sunstroke (or thirst) when you see a vision from heaven ‒ a bright, eye-catching pile of orange thambili heaped high on the pavement. The smiling vendor obligingly picks one up, cuts off the top for you, slips in a straw and ahhh… sheer bliss.

The king coconut (cocos nucifera var. aurontiaca), or thambili as it is known in Sri Lanka, is a variety of coconut indigenous to our island. They are a pretty common sight over here, either on tall laden thambili palms waving in the breeze, or in the dazzling piles that appear on pavement kiosks like magic during warm weather. Cooling off with some refreshing thambili water is nothing new over here; we just take it for granted as another one of those many things unique to our little island in the sun. However, it turns out that our thambili has more health benefits hidden in its bright shiny shell than we would ever have guessed.

It is a rare occurrence indeed when something that tastes so heavenly happens to be healthy at the same time. Here are some reasons why king coconut water should be considered the new health drink.

Get That Energy Kick

Forget all those canned sports drinks you get off the supermarket shelves ‒ a nice drink of thambili water is all you need for an energy boost after a bout of strenuous activity or a work-out. Packed with electrolytes, not only does the king coconut contain much more potassium, chloride, and calcium than most sports and energy drinks do, but it also packs in less sodium and sugars. Plus, it has the advantage of being all natural; straight from a tree rather than some bottle or can!

During World War II, military doctors were believed to have directly siphoned king coconut water from the nut to wounded soldiers for emergency plasma transfusions. King coconut water has the same electrolyte balance as our blood plasma; since it is naturally sterile, does not produce heat or destroy red blood cells, and is readily accepted by our bodies, it is the perfect natural substitute for saline solution.

Thambili trees grow profusely all over the island with little or no intervention. This means the thambili you drink are mostly fertiliser free. Image Credit: allunderabowl.blogspot.com

Coconut water is believed to be the richest natural dietary source of cytokinins. Though studies are not conclusive, researchers have suggested the possibility that consuming a rich source of cytokinins may produce an anti-ageing effect on the body, reducing risk of developing degenerative and age-related diseases.

Cytokinins are also believed to have great potential as a cancer-fighting element. Researchers have yet to tap into that concept, but it certainly looks promising!

Keep Your Waistlines In Check

Stay away from those soft drinks! Why go for all those sugary colas and whatnot when you can have a nice, refreshing thambili instead? Think about it… it is low in fat and sugar, keeps you feeling full, tastes great, and is unbelievably packed with nutritional goodness at the same time. King coconut water also contains certain forms of dietary fibre and amino acids which help to moderate sugar absorption in our bodies and improve insulin sensitivity. So if you are on a diet, or just trying to cut down on your sugar intake, thambili is just the refreshment for you.

Medical research has shown king coconut to be an effective solution for the treatment of bladder infections, as well as kidney and urethral stones. There have been many reported instances where patients with kidney stones who drank king coconut water saw a significant reduction in the size, or expulsion of the stones, so that any need for surgery was eliminated.

King coconut water also acts as a diuretic, and is said to have the ability to cleanse your body of toxins and drugs.

Haven’t we all had the refrain “Vitamins are good for you!” drilled into our heads? Well, we didn’t know it, but king coconut water comes loaded with them. Thambili contains Vitamin C (ascorbic acid), Vitamin B1 (thiamine), Vitamin B2 (riboflavin), Vitamin B3, Vitamin B5 (pantothenic acid), Vitamin B6 (pyridoxine), Vitamin B7 (biotin) and Vitamin B9 (folic acid) ‒ quite an impressive list! These vitamins are all water soluble and required as coenzymes essential for cellular function. Vitamin C is an excellent antioxidant, Biotin is essential for healthy hair, nails, and skin, while Vitamin B9 has been shown to prevent anaemia during pregnancy. In fact, each vitamin comes laden with its own benefits, making our humble thambili quite the health supplement!

All ready for drinking! A vendor hacks off the top of a thambili. Image Credit: Flickr/Migration Mark

Veda mahaththayas (ayurveda practitioners) have been tapping into the medicinal properties of king coconut for time out of mind. In fact, our veda mahaththayas discovered the potential of king coconut as a medicine long before scientists and researchers ever did! One of its most popular uses in ayurveda practice is the aralu concoction, where king coconut water is mixed with aralu (myrobalans) powder. This brew is known to have a cooling effect on the body, as well as being an effective laxative.

The balance of the Potassium and Magnesium content in king coconut water is said to be effective in reducing the risk of high blood pressure and strokes, as well as increasing circulation. Research even suggests that it could be used as a ‘heart tonic’ to help strengthen the heart and reduce plaque formation in arteries.

This one goes without saying. Haven’t we all, at some point or the other, had a nice long swig of thambili water and instantly felt wonderfully, remarkably refreshed? It may seem like magic, but that is just all those electrolytes kicking in, right along with its incredible cooling properties. Not only do they work wonders for a tired, thirsty pedestrian trying to survive one of Sri Lanka’s hot, sunny days, but all those electrolytes also serve to make king coconut water an excellent method of oral rehydration after a bout of diarrhea or vomiting. Plus, it is completely safe for everyone, from pregnant mothers, to little infants, and has absolutely no side-effects (not unless you happen to be some rare being who is prone to severe nut allergies, the chances of which are pretty slim).

Is it any wonder that king coconut water is dubbed the ‘fluid of life’?

To put it all in a nutshell (pun unintended), our thambili is cheap, easily available, palatable, refreshing, and simply chock-full of health benefits, as well as being fat-free, gluten-free, cholesterol-free, diabetic friendly, low in calories and completely, utterly Sri Lankan; almost too good to be true! In fact, many companies have taken to exporting bottled king coconut water to developed countries, where health fanatics, urbanites and athletes seem to have caught on the coconut water craze.

An advertisement for bottled king coconut water. Drinking thambili and tender coconut water seems to have become quite a trend in developed countries. Image Credit: amazon.com

Knowing what you now know, we’re pretty sure that the next time you stop by a roadside stall to treat yourself to a nice thambili, you will definitely relish it more than you used to. After all, with most healthy foods having the tendency to taste vile, we don’t often have the luxury of enjoying something that is actually good for us! Let the Gods keep their ambrosia; we have our thambili and that is quite good enough.