Edible tuberous roots, better known as yams or ala in Sinhalese, are a popular food source, particularly in rural areas, as they are packed with vital nutrients, with their high starch content making them a good substitute for rice.

They can also be cultivated with relative ease, because of which many villagers try to grow their own manioc or sweet potatoes in their home gardens.

Speaking to Roar Media, nutritionist Roshan Dela Bandara explained that because of the high starch content in yams, they are classified by nutritionists as energy-giving foods. He added that along with starch, these crops are also filled with proteins, dietary fibre, minerals such as calcium and potassium, and a certain amount of vitamins like thiamin, vitamin B, and riboflavin.

Out of the 93 varieties, manioc, potato, sweet potato or bathala, ginger, and turmeric are the most widely used varieties of edible roots and tubers in the country. While ginger and turmeric are used to add flavour, manioc, and sweet potato are typically boiled and eaten with grated coconut, pol sambol or lunu miris, made into curries, or used to make snacks like manioc chips.

Similarly, in rural areas varieties of yams like the purple rajala and the giant-sized kidaran ala—which are hard to come by in the urban landscape of Colombo and its suburbs—are boiled and eaten in accompaniment with grated coconut, or grated and ground into flour to make sweetmeats and dishes like pittu and roti.

In 2001, the UN Development Programme, in collaboration with the Community Development Centre of the village of Aranayake in the Kegalle district, conducted a research programme to document the various types of yams, their health and nutritional benefits, the best methods of preparation and other factors related to the cultivation of these edible roots and tubers.

The main objective of this project was to encourage more farmers to cultivate the lesser known, and lesser grown varieties of yams which are found in the country, in the hopes of increasing agricultural self-sufficiency among the villagers. Reducing malnutrition and other ailments caused due to lack of nutrition was another important aim of this five-year programme. As a result, a booklet titled Saru Diwiyata Deshiya Ala written by Damayanthi Godamulla, with relevant information related to the various types of edible roots and tubers was published in 2008.

Given that there are a large number of different yams found in the country, a handful of those which have additional health benefits and added nutritional value have been listed below. 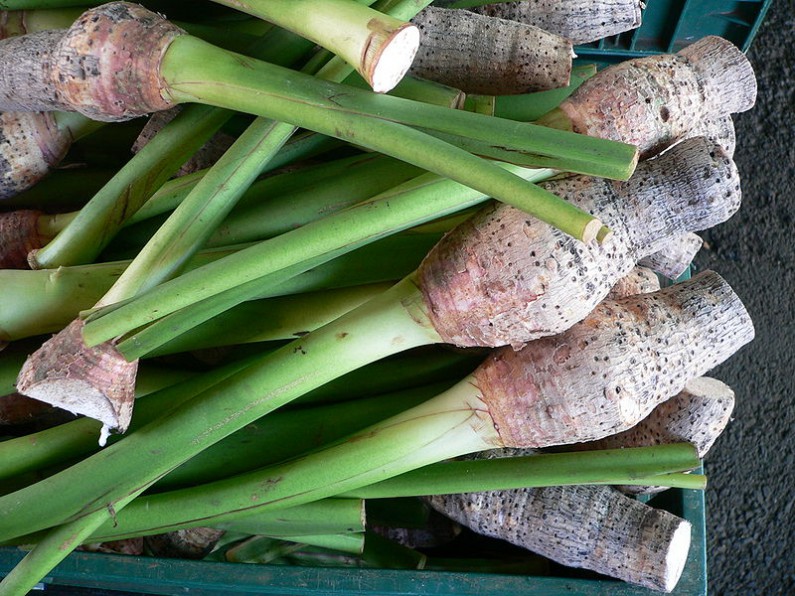 Taro can be found in two varieties in Sri Lanka, one which has white yams and another which has purple yams; the variety which is white in colour is more common than its purple counterpart. Image courtesy wikimedia commons

According to Dela Bandara, kiri ala yams can occasionally be found in certain supermarkets, even though the crop may not be widely grown in urban areas. The yams are quite large and white in colour and have a slightly milky taste when cooked, hence the name kiri ala in Sinhalese.

The book Thuru Thorathuru written by Dharmaratne Tennakoon, which also contains information about certain varieties of yams, mentions that kiri ala is a ‘heaty’ food which should not be eaten very frequently. On the other hand, the yams are also said to be high in carbohydrates, thiamin, calcium, and vitamin C, which makes it an ideal food for people who need to consume extra nutrients.

According to the book Thuru Thorathuru, a purple variety of the kiri ala yam, too, is available. This variety can be commonly found in coconut estates, for these plants are cultivated alongside the coconut trees as a mixed-crop. The yams of this plant have a purple peel, and the stems and leaves of the plant are purple in colour too. 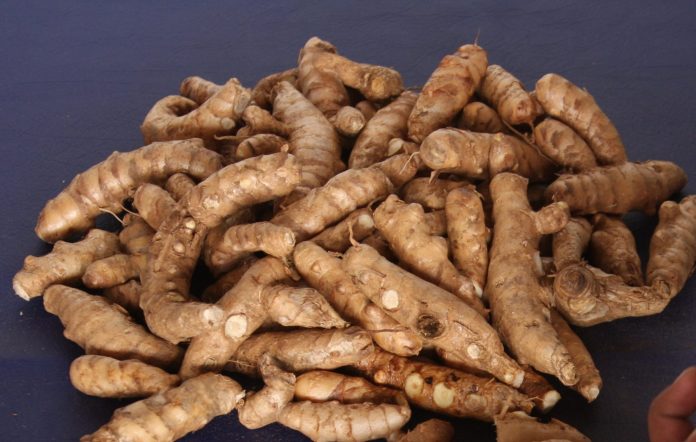 Consuming the arrowroot yam is beneficial in preventing and alleviating illnesses related to the digestive tract, like indigestion and ulcers. Image courtesy iwnsvg.com

According to the book Saru Diwiyata Deshiya Ala, the Veddas call this tuber arukka. It contains protein, vitamins, calcium, and a high content of carbohydrates.

The yams of the arrowroot plant are narrow and white in colour, while the plant grows to about one to two feet in height, and has long, dark green leaves.

Saru Diwiyata Deshiya Ala mentions many health benefits which can be obtained by consuming arrowroot. Because of its high protein content, doctors recommend the yams for patients who need to consume a lot of protein foods.

Consuming the yam is also beneficial in preventing and alleviating illnesses related to the digestive tract, like indigestion and ulcers. Flour made from these yams is also a nutritious food for patients with heart ailments. 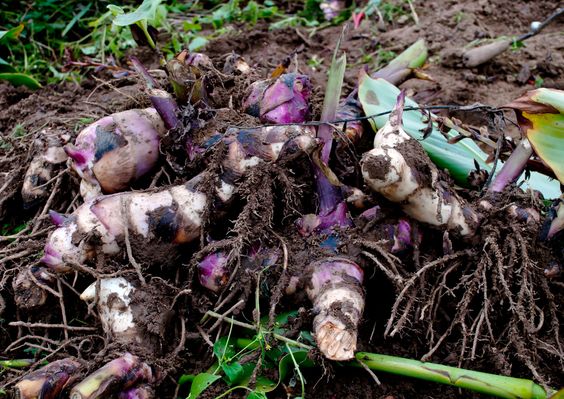 “[Indian shot yams] are very tasty and are very high in starch. Unlike the other varieties of local yams, [they] have a slightly sweet taste.” [1]

Both the red and the white variety of these yams have many medicinal properties and have been noted in curing jaundice (yellow fever) and preventing phlegm-inducing diseases in infants.

Because of the high starch content in Indian shot yams and their ability to help reduce phlegm, they are an ideal food to be given to patients suffering from phlegm-inducing illnesses, and those who are physically weak and need a lot of nourishment. In rural areas, the gonala yams are used in treatments to counter the venom of snakes. Image courtesy wikimedia commons

The gonala are thus called in Sinhalese because these yams take the shape of elk (gona) horns. As stated in Saru Diwiyata Deshiya Ala, the gonala creepers can be found quite widely in the jungles.

What is most interesting about these tubers is the fact that villagers use them to counter the venom of a vast number of snakes. The gonala yams need to be boiled with milk and a variety of herbs for about half an hour, and the antivenom is administered by applying it to the head of a person who has been bitten by a snake.

The treatment needs to be administered in this manner for three consecutive days to counter the deadly effects of the snake venom (link in Sinhalese). Rajala yams can be boiled and eaten or made into dishes like gruel or sweetmeats. Image courtesy massspectrumbotanicals.net

The name rajala has been given to these yams because of their immense size. While many of the other varieties of creepers, bushes or plants that have edible tubers or roots usually produce multiple yams growing under each one, the rajala creeper usually produces just one, large-sized yam.

“Two separate varieties of [rajala], with a light purple peel and dark purple peel, have been discovered.” [2]

After these yams are boiled they have a floury texture, and can be eaten alone as a meal or can be made into gruel and sweetmeats like muscat. The tubers of the udala creeper too, are large in size and have a taste which is very similar to potatoes. Another interesting fact about the udala creeper is that it produces smaller tuber-like rhizomes on its surface, and according to Saru Diwiyata Deshiya Ala these yams, too, can be consumed. The elephant foot yam is a large yam which can be found in three different varieties. Image courtesy wikimedia commons

According to Saru Diwiyata Deshiya Ala, it is only the white elephant foot yams which can be eaten. The plant which produces these yams has a light green trunk dotted with white spots and has several health benefits which include the curing and prevention of ulcers in the stomach.

The beheth kidaran plant has a dark green trunk with dark green leaves, and the yams are used in ayurvedic medicine to cure various rashes and boils, like ulcers.

The wal kidaran or polon kidaran plant has reddish-brown trunk with light spots on it, much like the skin of a viper or polonga, thus the name polon kidaran.

“Doctors say that wal kidaran [yams] help to alleviate eye infections. [They] are also used to treat snake bites. It is said that skin conditions like itchy rashes can be cured by applying a poultice with [these yams and] lime juice. Even though wal kidaran yams are not consumed, they are used in certain treatments of traditional medicine.” [3]

Sadly, even in the rural areas, some of the above-mentioned types of yams are not cultivated, and therefore it is becoming increasingly difficult to find them. Hopefully, more local farmers will grow more of these yams in their fields and home gardens. If by chance you come across any of these delicious yams in your local supermarket or at a vegetable stall, don’t hesitate to try them out for yourself.