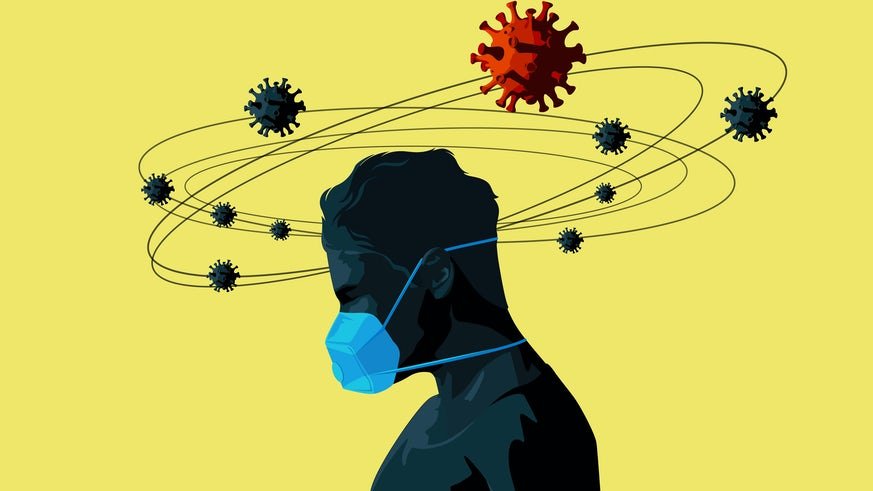 Fatigue, shortness of breath, and an inability to concentrate — many patients who had contracted COVID-19 described the feeling as a “brain fog”. These refer to some of the complications that can last for weeks or months after the infection has gone away.

“It took me about four months to fully recover from COVID-19,” Haren Gunawardena, a 23-year-old software engineer, told Roar Media. “My energy levels fell instantly [after contracting the disease] and I had some insane brain fog. I did not respond to a lot of medication.”

While most people who contract COVID-19 recover and return to normal health, some have complained of lingering symptoms. This has come to be known as “long COVID”, or post-acute COVID-19 syndrome, which was identified in the latter part of 2020. Importantly, the World Health Organization (WHO) has made it clear that people suffering from this are not infectious to others.

According to Dr. Aflah Sadikeen, a respiratory consultant at the National Hospital in Colombo, the symptoms presented by patients of long COVID are “usually very nonspecific’’.

“I see many long-Covid cases now,” he told Roar Media. “Over the last couple of months, the number of cases has increased. The reason is that we saw a surge of COVID-19 patients in the period of April-May. So now, this time around, those patients who recovered, are coming forward again with the same symptoms which we couldn’t explain. We see quite a lot of patients in our day-to-day practice as well as in the hospital clinic.”

What Is ‘Long Covid’?

Gunawardena tested positive for COVID-19 in April this year. “The recovery was slow since my body was also recovering from an operation I had. Luckily, I was taking care of myself in terms of food and exercise,” he said.

Many others, like Gunawardena, who tested positive for COVID-19, have reported that they felt as if they did not return to their previous health, despite having technically recovered from the illness itself.

Meanwhile, the WHO has observed that in the United Kingdom, around one in 10 COVID-19 patients may exhibit symptoms for a period of 12 weeks or longer. Other studies have indicated that about a third of people who tested positive for COVID-19 had not returned to their usual state of health. Another international study by The Lancet that surveyed 3,762 people with confirmed or suspected long Covid from 56 countries identified 203 symptoms, of which 66 were tracked for seven months.

“What it means to have long Covid is that you continue to experience the symptoms of COVID-19 for at least three months, even after you have recovered from the initial infection,” Dr. Sadikeen explained. “If there’s something new, a condition that you cannot explain, and if you’re a person who has recovered from COVID over three months ago, you have to seek medical attention,” he cautioned. “It is important to address this early on. If you don’t tend to it, you may end up with some long-term complications and it may turn out to be irreversible,” he said.

“The first thing I noticed was a low energy,” Miru*, a 28-year-old lawyer said. “I have to run around the court on a regular basis. So when I did get back to work [after recovering from COVID-19], I realised that it was difficult to do what I used to do. Going up and down a flight of stairs was exhausting suddenly,” she said.

Miru said she likes to meticulously plan out her day and her work. She would work from 8:00 a.m. to 6:00 p.m., driving herself to work, and to courts. She would make a list of activities and tasks to do within the day. But after her COVID-19 experience, she realised she was fatigued no sooner than she had finished just the first few tasks of the day.

“I was pretty independent before COVID.  But after it, I’ve had to rely on people to help me out. It has taken me a while to get used to it,” she said. “Especially because the people around me were used to me working at a certain pace. And when I wasn’t performing at that level, they questioned my work ethic. Everyone was wondering ‘what’s going on with you?’, ‘why aren’t you working the way you used to?’ And I had to explain to people that yes, I have recovered from COVID but I’m still suffering in a different way,” she said.

“It was difficult because you cannot really see that something is wrong with you. But inside, you can feel you’re wheezing, the muscle aches that weren’t there before are now sort of part of your everyday life,” she added.

‘Never Had Asthma Before’

Tharani Mayadunne (27) said that apart from the usual COVID-19 symptoms that prevailed well after her recovery, she also experienced forgetfulness and severe menstrual pains.

“My period became extremely painful, and long, soon after my recovery,” she said. “I would not be able to get proper sleep for days because of the pain. This also affected my strength and mindfulness. I started getting tired from even the smallest workout. I’m someone who remembers all my steps. I rarely lose my things. But there have been so many occasions where I totally messed up,” she said.

After speaking to several others who contracted the disease, Mayadunne realised that this was a common occurrence among a lot of patients. “I spoke to others and they said they’ve been going through something similar. Forgetfulness and foggy parts in your memory.”

Both Mayadunne and her husband tested positive for COVID-19 earlier this year. The newly-married couple went through quarantine and a 10-day self-isolation  (“we got an additional honeymoon”) and recovered from the virus — only to realise that some of their symptoms had not gone away.

“Both of us never had asthma,” she said. “But afterward, my husband had to consult an eye-nose-throat specialist (ENT) who prescribed an inhaler. The inhaler has helped him a lot and his breathing has come back to normal. But if he drinks anything cold, that triggers it and he gets a head cold and the sneezing doesn’t stop,” she said.

“I myself tried to go on a clean diet and work out to put me off my conditions,” she said. “I tell myself if I’m feeling down, that I will not react badly, and have myself together. But as of late, after COVID, I lose it all the time. I’ve become very irritable and even the slightest thing puts me off.”

A small percentage of patients have also claimed that after recovery, they experienced a sudden change in their mental health. A spike in anxiety and depressive episodes are not uncommon, as per the WHO’s observations.

“After I tested positive, I noticed that I became very anxious, very quickly,” Shana (30), who works as a professional hairdresser, told Roar Media. “I was scared to watch TV and see or hear anything about COVID-19. If I heard about a death, I would get really nervous and I wouldn’t be able to breathe. I’d start hyperventilating and eventually, I noticed that these attacks happened more regularly,” she said.

Shana first experienced a panic attack at a private quarantine centre a few days after she tested positive for COVID-19. Once the quarantine was over and she returned home, she noticed that her anxiety continued to be triggered by any kind of bad news. “Whenever I had a panic attack, my body would start shivering. It would get worse and worse and I would feel as if I was burning from the inside out,” she said.

“I eventually had to seek professional help,” she said. Now, Shana has set herself a strict schedule involving exercise and meditation. “Not many people talk about these conditions even though they go through them. They are afraid of the stigma surrounding mental health. But I believe talking about these things is essential. That’s how we stay informed,” she said.