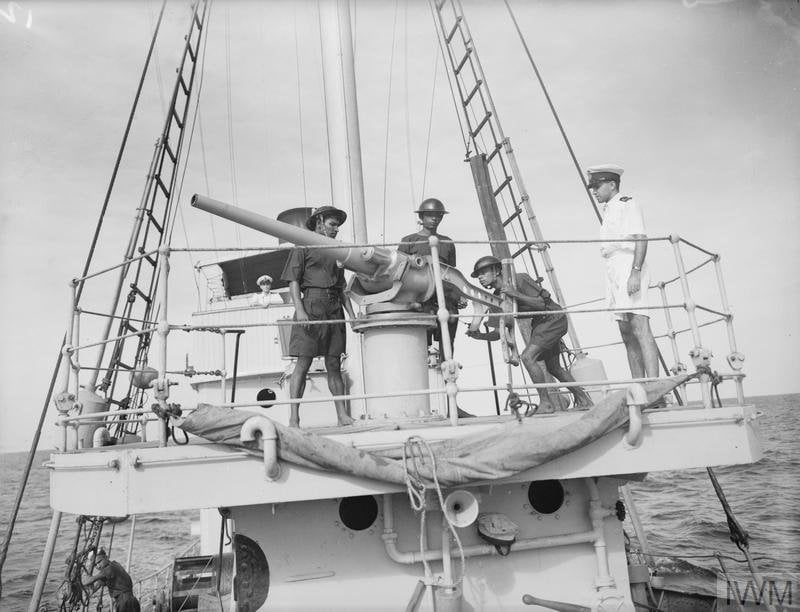 Go back in time to 1942. Imagine an entirely different Colombo from the one you’ve come to know and love (or hate). Let the scene change, the atmosphere mutate. Let the time flow to a different age when the air was much cooler and pleasant in a different Sri Lanka all together ‒ where Sri Lanka was not even ‘Sri Lanka’ but was Ceylon. And it was the height of the second World War. Storming the beaches of Normandy. Also known as D-Day, this was a pinnacle moment of World War II. Image courtesy: wikimedia.org

World War II commenced in 1939 as a result of several incendiary events that occurred in the fallout of World War I. The war lasted six years and a day and involved a vast majority of the world’s nations—including all of the great powers—eventually forming two opposing military alliances: the Allies (USA, United Kingdom, Soviet Union and 19 other countries including the Commonwealth) and the Axis (Nazi Germany, Empire of Japan and Kingdom of Italy).

It was the most widespread war in history, and directly involved more than 100 million people from over 30 countries. World War II is currently the deadliest conflict in human history, with an estimate of at least 129,000 deaths recorded from the bombing of Hiroshima and Nagasaki, Japan, and approximately 6 million deaths reported from the Nazi Holocaust. Ceylon was no stranger to the conflict.

With Ceylon still being occupied by the British Empire, the country naturally became part of the frontline of the ubiquitous conflict with armed forces of the Allies arriving in the country. Records show that over 40,000 locals were recruited in 1939 to serve the British Empire, and these forces were also at many other frontlines such as in the Middle East (in defence of the Red Sea and the Suez Canal), Singapore and Burma. A number of camps were constructed islandwide by the Allied forces, which also saw the recruitment of locals to the military services.

Ceylon At The Frontline

Return to 1942. It’s April 5, an Easter Sunday, and most Colombo denizens have attended church and gone home to enjoy the rest of the day. But the city is more deserted than usual, due to the sirens that warned citizens of an incoming air raid. Yudhaperamuna (‘The Frontline’) was a series of newsletters and pamphlets that served as wartime propaganda to be distributed among the public. Image credit: Roar.lk/Minaali Haputantri

The British had been in occupation of the coastal areas of Ceylon since 1796, but the colony had not had a regular garrison of British troops since 1917. The Ceylon Defence Force and Ceylon Navy Volunteer Reserve had been mobilised and expanded. The Royal Navy maintained naval installations in Trincomalee and the Royal Air Force (RAF) had established an aerodrome in China Bay, Trincomalee, long before the war.

With Japan’s entry into the war in 1937, and especially after the fall of Singapore, Ceylon became a frontline British base. The Royal Navy’s East Indies Station was moved to Colombo and then to Trincomalee. Admiral Sir Geoffrey Layton was appointed Commander-in-Chief, Ceylon, with Air Vice Marshal John D’Albiac as Air Officer Commanding and Admiral Sir James Somerville appointed as Commander of the British Eastern Fleet.

The fixed land defences consisted of four coastal batteries at Colombo and five at Trincomalee; these were established just before the war. Air defences were expanded in 1941, with the RAF occupying the civil airfield at Ratmalana near Colombo and its station headquarters set up at Kandawala. PBY Catalina off the coast of Singapore. Image courtesy: ww2today.com

Another airbase was rapidly built at Koggala near Galle and several temporary airstrips were built across the country with the largest at Colombo Racecourse grounds. Several RAF squadrons were sent to Ceylon.

Following the sinking of the Prince of Wales and Repulse and the fall of Singapore, British morale on the island dropped. The sinking of these two important ships shocked much of the world, and many were forced to realise exactly how vulnerable battleships were when pitted against air power.

Forces deployed in Ceylon were anxious of a Japanese attack after the invasion of Singapore. Yet, according to historical texts, no extensive plans had been taken to address a potential attack.

The Japanese fleet that were imminent comprised five aircraft carriers under the command of Admiral Chuichi Nagumo and Commander Mitsuo Fuchida ‒ the same two leaders who carried out the Pearl Harbour raid that resulted in the US entering the War. The previous day (April 4), the airship PBY Catalina, commandeered by Sq. Ldr. Leonard Birchall, had flown out of Koggala, was able to locate the Imperial fleet and radio in to alert Colombo of the impending attack, before being shot down. The British radars were not operating; they were shut down for routine maintenance. The Japanese attack began at 07:30 a.m. on Easter Sunday morning.

President of the Ceylon War Veterans’ Association of World War II (CWVA), H. G. P. Jayasekara, writes in his book “How Japan Bombed Tiny Ceylon” how once the fleet reached Ceylonese waters, two waves of aircraft carried out the raid on Colombo. The waves consisted of 36 zero fighters, 54 dive bombers, and 90 high-level bombers. The Japanese also bombed the asylum at Angoda – currently the National Institute of Mental Health – mistaking it for the fuel tanks at nearby Kolonnawa. It was an accidental drop of a bomb by the Japanese, for which, on a later date, they apologised to the Ceylon Government. Other bombs fell closer to Bellanwila, Pitakotte, the Colombo racecourse, Horana, as well as the Galle Face Green. One Japanese plane crashed after being shot by ground forces near S. Thomas’ College, Mount Lavinia, and another near the Kelaniya Temple.

St Luke’s Church, Borella, was packed for Easter services with both locals and military personnel. According to parishioners, the vicar, Reverend Canon Ivan Corea, was preaching when the RAF Hurricanes engaged the Japanese Zero aircraft high above the church.

The attack resulted in the British forces losing two ships – HMS Dorsetshire and HMS Cornwall – 424 men were killed and 1,120 survivors spent hours in the water. Life In The Uniform

The most seemingly unremarkable individuals can tell the most remarkable stories. Such is the story of Corporal B. A. Sadar, who is one of the few surviving Sri Lankans to have taken part in World War II in 1942.

When Roar met up with him, Sadar, 92, was happy to show us his photo album that holds many of his sepia print memories as a war veteran. Now considered to be the oldest of former Zahira College students, Sadar had enlisted as a Non-Commissioned Officer of the Ceylon Army Medical Corps (CAMC) in March 1942, when he was only 18 years old.

From that day on, he went on to serve three years and eleven months in the CAMC. He was a corporal when he was released from duty on February 17, 1946. Sitting at his small dinner table at his home in Koswatta, Sadar recollected his experiences during the war. During the Easter Sunday Raid, Sadar was hunkered down in a building opposite the Racecourse barracks in a house-turned-into-camp down Thurstan Road called ‘The Maligawa’ – Sir James Obeyesekera’s stately mansion, which was a boarding house for students at Royal College.

Sadar recalled: “A mere month had passed when I joined the army when the air raids started. The siren wail commenced once the enemy planes were observed in the horizon. Once that started, we jumped into the trenches thinking it was a drill. The basic practice at the barracks was to take to the trenches at the sound of the sirens regardless of it being a drill or not. When we jumped into the trenches only did we witness the planes flying overhead. They were passing Racecourse and heading towards Galle Face. Once the planes passed us, the bombs started falling. The raid lasted around half an hour. Once the sirens stopped, we knew it was safe to come out of the trenches. The sight was utterly horrific to witness. We came out of the trenches crying and shocked.”

According to Sadar, it wasn’t just local individuals who were present during the raid; military forces from other colonies, including India, Pakistan, Africa, and Australia, were also present. He fondly recalled how they used to teach Australian troops how to wear sarongs.

“Once the situation calmed down, we were ordered to rescue casualties from all around Colombo,” he said, adding  “I was assigned to an ambulance unit with another soldier of the corps. We didn’t know where to go or what to do. Nobody knew what happened. We were just moving and collecting bodies and the injured. We came to the harbour where we were told there were several casualties. We collected the bodies that were gunned down by the Japanese fleet, and took them to the nearby hospitals. This continued for at least two days.”

Following the air raids and many other similar missions that lasted several months, Sadar and his corp was separated; some were deployed to Trincomalee and various other military hospitals around the country. Before being appointed as an orderly at 132, Ceylonese General Hospital on Regent Street – now known as the National Hospital on E.W. Perera Mawatha – Sadar had worked in a Medical Inspection Room of the Craigton Lodge in Nuwara Eliya.

Sadar also remembers moving from location to location, from camp to camp, following mission directions. He noted how the Ceylon Defence Forces always occupied large buildings and premises such as school grounds to establish camps within Colombo. Most of the schools operated as military hospitals and army barracks during this time.

Once he joined the General Hospital as an attendant, Sadar got his preliminary medical training for surgeries as well as general care. There, he assisted the likes of senior surgeon Dr. M. V. P. Peiris and later a politician, Dr. H. C. P. Gunawardene, and anaesthetist Dr. Prince Rajaratne. Corporal B. A. Sadar, then and now. Image credit: Roar.lk/Minaali Haputantri

“We worked under soldiers who were also doctors. They were great men to us. They were simply revered. We were beyond comparison that way; the only equipment we handled were bedpans. We were called bedpan soldiers,” he said, jovially.

War Veterans: Dead But Not Forgotten

Even while he was recalling the most gruesome memories he had encountered, Sadar maintained a rather pleasant attitude. He did not forget and did not fear to lighten even the most serious mood with a joke or anecdote about one of his many adventures and misadventures. There are only a handful of surviving world war veterans like Sadar remaining in Sri Lanka, many of them long-forgotten. According to Secretary General Rear Admiral S. R. Samaratunga of the Sri Lanka Ex-Servicemen’s Association, when the Association was initiated in 1998-99, there were 1,200 World War II veterans registered. The Association provides a monthly grant of Rs. 2,000 alongside other welfare services such as medical services, providing care for the ageing ex-servicemen.

The numbers have obviously dwindled over the years. Currently, the Association provides monthly grants to only 350 of the original 1,200 ex-servicemen.

Apart from this, there is a significant lack of recorded information on the Sri Lankans who served in the War. Rear Admiral Samaratunga noted that there has never been a proper census of those who served during the War. The only available option was to collect information through living relatives and war memorials.

There is a saying that goes “War heroes don’t die, they are simply forgotten”. These war veterans hold stories of a time none of us were around to remember. They are living, breathing testaments to a time forgotten and lessons not yet learned. Their experiences of war should be reminders for the modern generations. This is why it’s important to record and remember their accounts, before these stories are forgotten in the web of time.