There are several tales about the legendary King Ravana and his aircraft, or vimana—the most famous one being the Dandu monara. Of course, there is no archaeological evidence to prove that King Ravana existed, or was a pioneer of aviation, but Sri Lanka does indeed have a rich aviation history which dates back to more than a century.

One very important milestone in this timeline was the birth of Air Ceylon—the first national airline of our country, which would have celebrated 70 years last December if it had still been in operation. Air Ceylon was founded in December 1947, at a time when aviation was in vogue due to the success of the aeroplane as a mode of transport during World War I and World War II.

As Captain Elmo Jayawardena notes in his book A Centenary Sky: 100 years of Aviation in Sri Lanka, “During war years the aeroplane had proved its worth, both as a mode of transport for people as well as a means to move cargo. In the new world order, the aeroplane had its place as the best and fastest means of travel for people.”

For these reasons, the idea of a commercial airline took root in Ceylon. The idea was—as noted in A Centenary Sky—first addressed by a group of businessmen, who took steps to draw up the plans for Ceylon Airways Ltd. The Aeroclub of Ratmalana, too, was engaged in this project, which was intended to establish an airline which could charter flights between domestic and regional airports.

Legislation, however, passed at the same time the plans for the airline were drawn up, only gave exclusive rights to the government to set up a commercial airline in the country.

It was, therefore, the Department of Civil Aviation that first brought passenger aeroplanes into Ceylon. In early 1947, the Department purchased three second-hand Douglas DC-3 aircrafts—which were better known as ‘Dakotas’—from India, and these planes were given the names Sita Devi, Viharamaha Devi, and Sunethra Devi.

At the same time that these planes were brought in, Ceylonese pilots who were working in India came back home to seek employment with the new airline of their home country. It is said that they were mainly British Royal Air Force (RAF) trained pilots who had served in the World Wars. Moreover, other pilots returned to Ceylon directly from The UK to offer their services to the operation.

Thus the country’s first airline was born, and its first international flight took off on December 10, 1947, from the Ratmalana airport to Madras, with a stop-over at Jaffna.

Partnerships with other airlines Over the course of the thirty years the airline was in operation, it maintained several partnerships with international airlines. The first partnership Air Ceylon had was with the Australian National Airways (ANA) in 1949. It was the ANA which set up the international flight network for Air Ceylon, with two DC-4 Skymaster aeroplanes called Laxapana and Ratmalana.

These planes flew two routes—the first was eastwards from Ratmalana to Sydney, via Singapore and Jakarta, and the second was westwards from Ratmalana to Bombay, Karachi, Cairo, Rome, and London. According to A Centenary Sky, the Australian airline owned 49% of Air Ceylon and the partnership lasted until 1955. During this period of time, Air Ceylon included additional charters to Australia and Jeddah.

The second partnership maintained by Air Ceylon was with KLM Royal Dutch Airlines, the flag carrier airline of the Netherlands. The aeroplanes used during this period of time were triple-finned Lockheed Constellations, and they operated the same air-routes as the Skymasters that were brought in by the ANA. Amsterdam, too, was added as a destination to the flight network of Air Ceylon.

In 1962, the airline changed partners again—for the third time—this time joining hands with the British Overseas Airways Corporation (BOAC). The internal flights of Ceylon—which operated between the Ratmalana and Jaffna air bases—were extended to the areas of Ampara, Batticaloa, Trincomalee, and Anuradhapura.

Government workers were granted the benefit of exchanging their railway travel warrants for airline tickets for domestic flights—a great advantage, which allowed an otherwise expensive mode of transport to be available for a vast majority of people in the country.

During this partnership with BOAC, two new aeroplanes were also introduced to the existing fleet—a new HS 748 and a Nord 262. More importantly, the first nationally-owned commercial jet aeroplane, a Hawker-Siddeley Trident, came into service with Air Ceylon in the year 1969.

In 1971, the French airline Union de Transports Aériens—better known as UTA—became Air Ceylon’s fourth—and final—international partner. The partnership between Air Ceylon and the UTA ended in 1975 when the management of Air Ceylon decided to work independently in all operations of the airline.

The pilots of Air Ceylon

As mentioned in A Centenary Sky, Captain Peter Fernando—who had previously served as a Chief Pilot in the Indian National Airways—became the Operations Manager of Air Ceylon’s Dakota Fleet in 1947. It was he who was in command of Air Ceylon’s first international flight from Ratmalana to Madras, on December 10, 1947, along with two other pilots—Captain Emil Jayawardena and Captain C.H.S. Amarasekera.

Another pilot noted for his services to Air Ceylon was Captain George Ferdinand. He served the airline as its Operations Manager and was the first Ceylonese pilot to hold an Airline Transport Pilot Licence (ATPL). He was also credited with having flown the most number of hours for Air Ceylon.

Moreover, Captain George Ferdinand, along with other pilots like Captain P. B. Mawalagedara, Captain Simon Rasiah, and Captain Anil Rambukwella, were the first pilots selected to fly the Hawker-Siddeley Trident jet aeroplane in 1969.

The end of an era 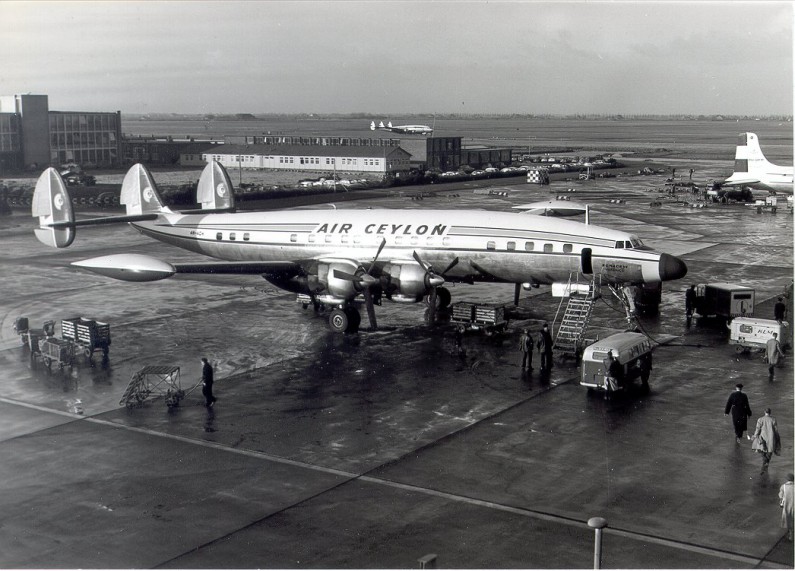 Even though Air Ceylon was only in operation for 32 years, it was the pioneer of commercial aviation in Ceylon. Image courtesy ivan_corea.tripod.com

Early in the year 1978, Air Ceylon was forced to discontinue its international flights, due to bankruptcy. The airline eventually ceased all its local services as well on August 31, 1979, when it was replaced by the new national airline—Air Lanka.

As Captain Elmo Jayawardena concludes the chapter of his book especially dedicated to Air Ceylon:

The Centenary Sky will always remember ‘AE’ the two-letter identification of Air Ceylon. It served a nation, flew her people and proudly held its head high in the infant days of commercial aviation. [2]

While the airline was in operation for only 32 years, it was the opening that commercial aviation in Ceylon needed. It paved the way for its successors Air Lanka, and later on Srilankan Airlines, to take the airline industry in Sri Lanka to greater heights—and of course, bring in more tourists to our country.