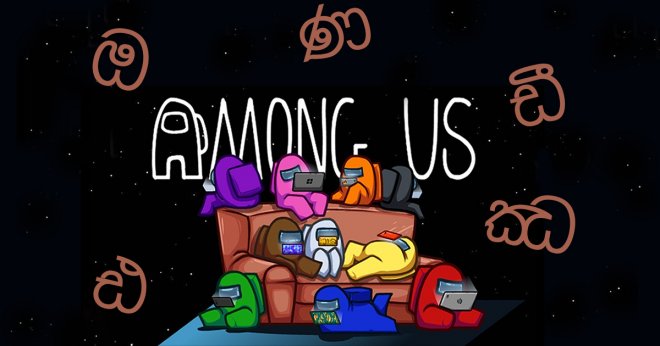 'Among Us' And The Sinhala Alphabet: Cultural Appropriation Or Language Progression?

Natasha Mamuhewa
24 Sep 2021
12.1K Views
12.1K Views
Share Save for later
This article is written by a contributor.If you want to write for us, check out our contributor platform.

It was a tweet that captured more than eighty-nine thousand likes and over nine thousand retweets, simply with “ඞ” from the verified account of popular online multiplayer game, Among Us – created by InnerSloth LLC, based in the USA. Later, when asked where the character originated , the company acknowledged it was indeed from the Sinhala alphabet.

Another user quipped that they’d used it for aesthetic purposes in their username on another popular instant messaging platform, Discord, but never knew it’s origins until now. Avid players of the game were taken up by the resemblance and similarity in the look of in-game characters to the characters of the Sinhala alphabet, soon using it in an emoji-like fashion to accompany their tweets to the account.

Is It Cultural Appropriation?

One of the key questions that came to the fore at the time was whether this constituted cultural appropriation or if it was merely another piece of evidence of the evolution of languages through social media.

Cultural appropriation occurs when cultural artefacts are misused by members of a different cultural community. It could be argued that languages are a cultural artefact, one that should be protected to ensure that the language is used in the way it was meant to. The appropriation of language is one that isn’t typically included when discussing cultural appropriation, but it is one that nevertheless is important – especially when analysing the protection of languages from minority cultures and preventing them from being used for profit by those with more power.

The usage and commodification of the Sinhala alphabet in this instance could be viewed in this light as well – compared to languages like English and Mandarin, Sinhala is estimated to have around 16 million speakers worldwide and the unique script of its alphabet is not widely known. The lack of awareness internationally involuntarily aids its’ appropriation through the misinterpretation of characters, as seen through this online discourse.

Through transforming its meaning, are we complicit in the corruption of a language that has been signalled to be at risk to become a dead language in the future?

Dr. Tharindi Udalagama, senior lecturer in Sociology at the University of Colombo, disagrees. “Though the popular discourse is that Sinhala is going to become a dead language, I don’t agree – yes, we are a small country and Sinhala is spoken only here, but that does not qualify it for extinction since we teach the language. Sinhala is taught in schools with generations both before and after us speaking it, so the memory of the language is still there and there are means to promote the language. If our language or alphabet itself is taking prominence in social media, it promotes the language and more non-native speakers would be curious to learn it”.

However, one can argue that the existence of language in its entirety is socially constructed, and the symbols integral to the alphabet are only meaningful because culturally, we have assigned meaning to each of the characters.

Through construing this meaning, the symbol loses its individual identity and value, which can be interpreted as virtually a loss for the language, and eventually the cultural group as well. The action of teaching and practicing Sinhala to ensure its survival highlights the importance and value attributed by native speakers as well as institutions within the country, especially when evaluating the central role that language plays in identity politics even today.

The Evolution Of Languages

All languages are dynamic – they evolve and have evolved over time through being shaped by environmental factors, cultural and social norms. There is no doubt about the cultural power that social media platforms and online gaming have on the evolution of languages, exemplified by the frequent updating of dictionaries with definitions for online slang in recent years.

The game itself has been instrumental in its contributions to internet culture, through the popularisation of terms such as “sus”, a shortened form for suspect (although the term predated the game’s existence), as well as through its endless contribution of memes through its role as both a cultural phenomenon and social lifeline during the COVID-19 pandemic.

Sinhala itself also has not been immune to its own evolution – brought upon historically through influences of other languages such as Portuguese and Tamil, and even recently with English, leading to greater hybridisation of the two languages. Dr Udalagama points out that “with the inception of texting, we saw more people starting to write Sinhala using English characters to send SMSs across as well as the proliferation of abbreviations for English terms which are still used today. With the evolution of texting and with how social media came to be, this process is evidence of language progression. A native British English speaker would see this as such rather than one of cultural appropriation”.

Steven Pinker in his study on ‘Language as an Adaptation to the Cognitive Niche’ chronicles the ability of languages to arise and evolve without being passed on from another culture. This has been noted in instances such as the creation of multiple complex sign language systems but also in the emergence of lingua franca such as Pidgin in the past.

The ability to give meaning and create new languages accompanied by the fact that the languages we speak today are an amalgamation of multiple influences highlights that not only is evolution a natural feature of languages, but it is also inevitable. Due to the constant interaction through social media channels, the possibility for greater and potentially a faster rate of language evolution is much higher. Even within usage of non-alphabetical accompaniments of languages such as using emojis, there is great diversity in the interpretation and usage of different emojis, both geographically and generationally.

Such usage evokes emotional responses that can only add to and expand the ability of us as individuals to communicate. It can be argued that through this new meaning, as mentioned earlier, characters of the Sinhala alphabet are able to reach international consciousness and allow for new ways of interpretation that can only add to, rather than take away from the practice of the language.

Rather than an environment of greater fragmentation, the evolution of languages allows for greater integration, connection, and communication within our global online community while enabling awareness-building and education of lesser-spoken languages from people of colour across the globe.

The Role Of Language

The purpose of a language is to act as a medium for sharing information and communicating – at its core, to simply express oneself. It is our individual point of view and how we attribute value to our symbols that helps to shape and make sense of our world.

Language is a symbolic system – its survival depends on the conglomeration of such individual meanings. These individual meanings also mould our cultural identity. However, culture too is dynamic, and has evolved and continues to evolve, like language, due to the interactions of individuals with their changing environments. It is difficult to determine whether the progression of a language should be exclusively internally driven due to the complexity of how external factors influence the belief systems of those within cultural groups or be allowed to also evolve through these new pathways and interactions from those outside cultural communities.

In the end, if the goal is the survival of the language, then maybe the method of evolution is irrelevant. In both interpretations above, the security of survival is ensured because ultimately it is still valued enough to be given meaning by the user. Steven Pinker notes , “...a distinctive and important feature of information is that it can be duplicated without loss” (2003, p. 28). Thus, given the nature of how globalised our world is, maybe it’s in the best interests of the language to allow several meanings to coexist, as long as we, as individuals, we value and prioritise its survival everyday.