History records social transformation. It is through the lens of historical narrative that we see the ages and eras of the past and learn of the people, places, and events that made an impact. Documented history throws a light on the customs and rituals of people as they wend their way through time, leaving their mark on a particular epoch.

In the 1950’s, Ceylon has just gained independence from the British Raj, the fruits of which were yet to be seen. Many of the cultural influences of the British were still apparent, including speaking the English language, clothing styles, and partaking in English customs and holidays.

The major Christian holidays—Good Friday, Easter Sunday, and Christmas were all celebrated on the island, and going by documented history, Christmas in Ceylon in the 1950’s was a riotous time with all the main hotels hosting gala events. These began as early as the 22nd of December and lasted till Boxing Day, before picking up again for the New Year. 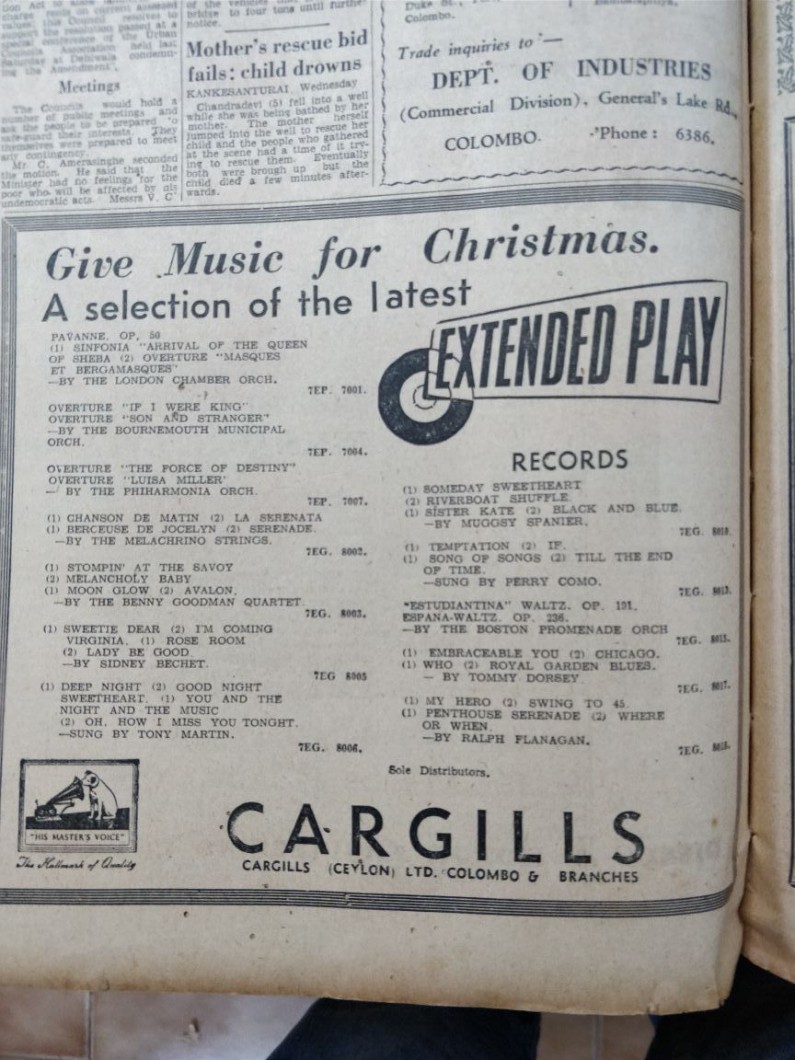 Records advertised by Cargills, on the Ceylon Daily News.

All the events organised by the Grand Oriental Hotel in 1951 offered the option of attending the dance without the dinner, for roughly half the price, indicating that dancing formed an important part of the festivities, which an advert in the Ceylon Daily News said would include the “gayest of decorations and illuminations, crackers, caps, toys and balloons”.

The Grand Oriental Hotel also held a special Christmas Concert by ‘Felice and his Blue Star Orchestra’ on December 19, 1950,  in aid of the ‘Deaf and Blind School’—although it is not indicated if this is the same one in Ratmalana today. The iconic Galle Face Hotel held a dinner dance on December 23, followed by a ‘Promenade Concert’ by ‘Sacha and his Melodists’. The Christmas Day dinner dance was priced at Rs. 12.50 —just 50 cent more than what the dinner dance at the Mount Lavinia Hotel cost.

Colombo was not the only locale to celebrate Christmas in style: the Bandarawela Hotel organised a ‘Grand Christmas Dance’ with music by ‘Mario Manricks Band’ for Rs. 10.00, in keeping with Colombo prices, and also indicating that the planters community in the central highlands would celebrate the holiday, while the Savoy Ballroom advertised a Christmas Eve and Boxing night dinner dance with “hats crackers and effects” for Rs. 7.50. Down in the south, the Southern Cup, or the ‘Boosa Races’ were also an important part of the Christmas festivities in Ceylon. Trains were delegated to take crowds to Boosa, with special fares on return tickets and other deals offered by the Ceylon Government Railway.

The middle class shopped at ‘Millers’ where hampers were priced between Rs. 35 and Rs. 143. Interesting to note was the fact that Cargills—that exists now in the form of supermarkets—sold records during the 1950’s. The local papers advertised records by the London Chamber Orchestra, the Philharmonic Orchestra, the Benny Goodman Quartet, and Muggsy Spanier to name a few.

Similarly, Pilawoos as we know it today on the Galle Road in Colombo did not exist; instead, Pilawoos was located on the Second Cross Street in Colombo 11, where ‘venison biriyani’ was a seasonal offer. Perera and Sons and Elephant House were going strong in the 1950’s, as was the ‘Bake House’, advertising Christmas cakes, yule logs, and breudhers as part of its Christmas fare. ‘The Rupee’ on  Galle Road, Bambalapitiya was another store that offered imported goodies for low prices; Pascall’s Sunshine Marshmallows, Russell’s Fruit Lollies, Cayley’s Crawford Chocolates, and Rowntree’s Fruit Pastilles were some of the items for sale for as little as Rs.3 a pound.

Bata and Don Carolis were two other brands that had a presence in the 1950’s, offering shoes, sandals, and furniture on seasonal ‘mammoth’ sales. Bata was a strong brand even in the 1950’s. Image courtesy Ceylon Daily News.

Another important point to note was the fact that alcoholic beverages were advertised without government restrictions in the 1950’s. Although Sri Lanka’s Temperance movement began in the 1890’s together with anti-colonial sentiment, it seemed that people still freely consumed spirits.

Socially, Christmas was celebrated widely, with Chandra Arulpragasam writing in his memoir ‘Fallen Leaves’, “As a Christian living in a mainly Buddhist country, I am now amazed at the fuss that was made over Christmas in those days. It was a fuss in which all middle-class communities, Christian, Buddhist, Hindu, and Muslim participated, evincing a heart-warming give-and-take between the different communities and cultures.”

‘Thinking back, I am most struck by how the Buddhist and Hindu homes also celebrated Christmas in those times. I have been to Buddhist homes that had Christmas trees, Christmas presents, etc. in the 1950s. This was because the colonial legacy persisted even after decolonization. As noted above, this was partly due to the privileged position of Christianity under British rule but also due to the cultural overhang of English/Christian dominance.” Christmas, as it is celebrated today has changed in some ways; the days of swing bands and gala dinners are gone, replaced by buffet lunches and dinners and other activities at the many new hotels that have sprung up in the last 67 years. Some of the business entities of yore are thriving today, while some no longer exist. But the celebrations and traditions that remain at the heart of Christmas continue to live on today.