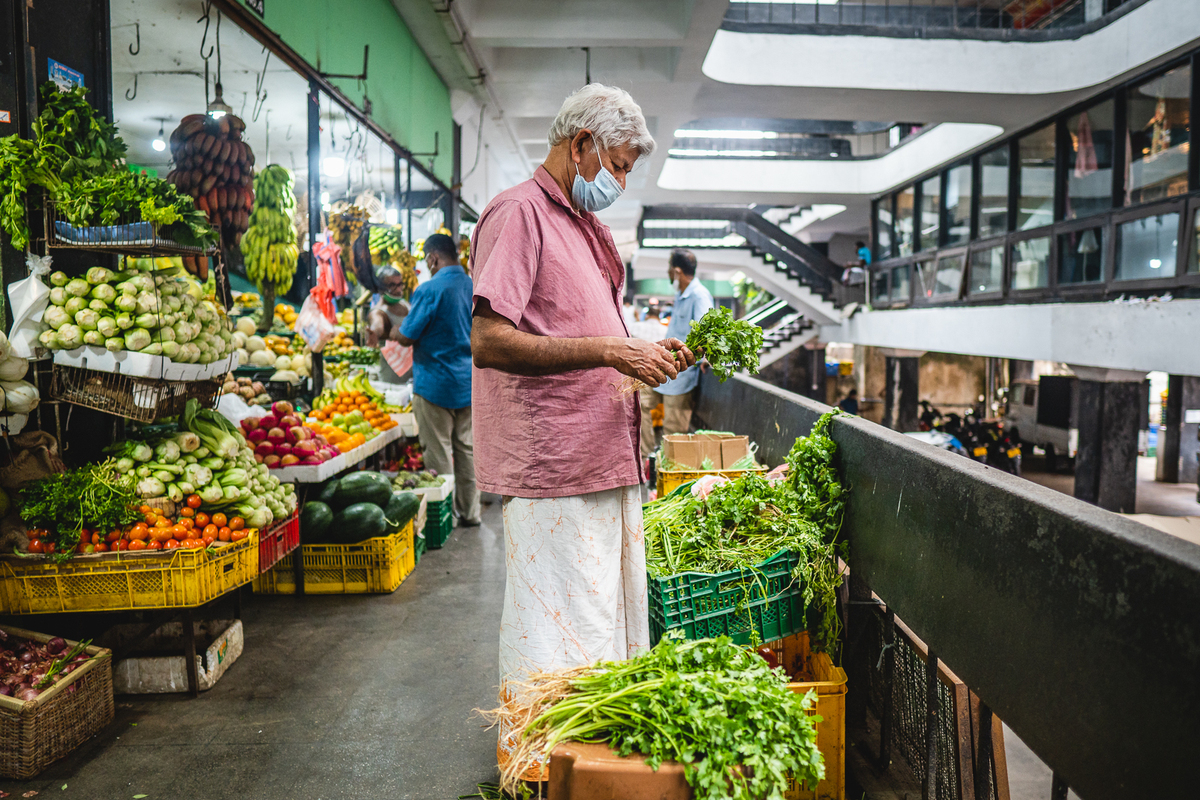 There is a vivid memory at the back of my mind. It is a Sunday morning; returning from Church, my mother and I visit the local pola. I recall fuchsia covers over piles of onions, lime green over green chillies, and men and women, shouting out prices. The ground of dirt, the multitude of vegetables in chaotic piles over goni cloth, so that they do not touch the dirt. There was the distinct smell of various spices in the air, mingling with that of sweat and of meat being sold in the far corner of the market.

The pola itself is not a dying concept, despite the popularity — and increasing presence — of the supermarket in Sri Lanka. And among the many surviving examples of its more traditional counterparts is the Colpetty Market. Located in close proximity to the Galle Road, Colombo’s main artery, the Colpetty Market is an unmistakable landmark. Kollupitiya in Sinhala, or Colpetty, as it is still referred to in its Anglicised form, was one of the main haunts of the city’s colonial elites. It was the city that modernised rapidly; and the market shares a large chunk of that history.

Built in the mid to late 1970s, the Colpetty Market is vast, not in its height but in its length. It has a long, low shape — which is claimed to have been inspired by Le Corbusier’s Villa Savoye — and stretches down Dharmapala Mawatha. It is almost stubborn in its existence, as it stands against the now rapidly-changing backdrop of the city. But its arrogance is justified. The building’s history feeds into this nature, as the building itself is a landmark of an era that experimented with socialism, before the introduction of the open economy access that witnessed this market’s boom in the ’70s and later on. The complex is fronted by a line of artisanal shops, a Chinese restaurant, a stationery shop and a bus stop. The colourful stores stand in stark contrast to the black rock walls of the building itself, covered in the perpetual dust off the street. Stanley (56) is a labourer who works at the market. He has worked here, doing odd jobs, since he was nine years old, he told us. He was able to narrate the building’s history: “This [the complex] was built in 1976, when the city was revamped for the fifth Non-Aligned Movement Summit, a year before then-Prime Minister Sirimavo Bandaranaike’s [election] loss in 1977,” he said. Chaminda Udayakumara (37) is the owner of several seafood stores. He is part of the fourth generation of fish sellers who owned the line of fish stores at the market. Selling everything from the common parau fish to the more extravagant lobsters and living crabs, the seafood stalls are dimly lit, with the moist bodies of the fish glistening amidst the ice under the fluorescent lights. When the customers are not there, the fishmongers are seen chatting and gossiping, with a cigarette being passed around. Sanath Priyankara (56) is a second-generation fruit seller. His store can be found on the ground floor, at the farthest left corner of the complex. Priyankara and Ashraff (58), the owner of the series of vegetable stores, are among the oldest store owners of the market.

Ashraff inherited the stores from his father, making him a third-generation vegetable seller and respected by everyone who owns a store here. He recalled, “In 1980, my father had paid Rs. 12 as store rent to the Colombo Municipal Council. Later it was increased to Rs. 65 and now I pay Rs. 12,000 as rent.” In a secluded corner of the second floor, you will  find the meat stalls. Selling a range of meats, much like the fishmonger, the meat stalls have also been here for decades. The workers here, too, spend their free time out on the corridor, when customers are not present. What was once a municipal market, or a local pola, was moved into the complex after the building’s construction. At the beginning of last year, there were over 90 stores in the building. A handful of these, however, had to shut down due to the economic burdens that came as a result of the COVID-19 pandemic. “There is no class division for us, we provide for everyone here,” Ashraff said. “People of all classes buy from us, including people from the nearby consulates and foreign embassies. We also provide products to Temple Trees.”

The Colpetty Market has so far escaped the proverbial bulldozer that has demolished many of the old Colombo haunts. The building, for now, is safe. Its inhabitants, however, are unsure whether this will last long, and whether that bulldozer and the threat of ‘development’ might be closer than one would like to believe.