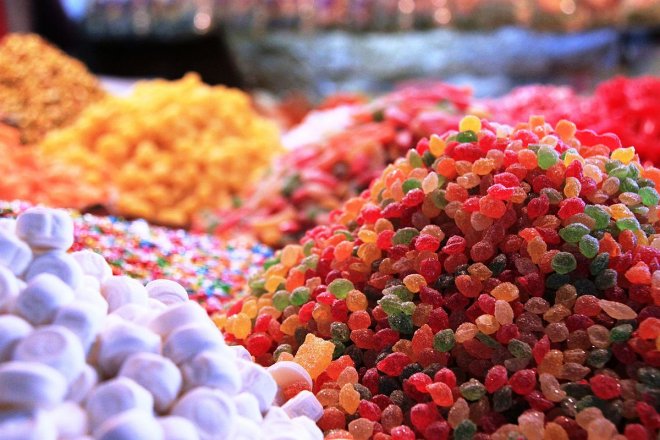 Down Memory Lane: Bulto, Hoonu Beti And Other Sweets From Bygone Days

A few decades from now, people recalling the magical tastes of childhood would probably talk about Ferrero Rocher, Oreos or the Ambrosial chocolate-covered crepe suzette from that posh cafe in Colombo 07. But way back then, when black and white televisions still existed and bell-bottoms were the in-thing, taste buds were much less demanding, and people reveled in simple, uncomplicated confections to get their sugar fixes.

Many individuals, when asked about what they used to enjoy back then in the ’80s, ’70s and earlier shake their heads sadly with a “they just don’t make these things like they used to,” launching into reminisces of little wayside kadeys with jars of colourful sweets and the tinkling bell of the bombai muttai man drifting across the village. Some of these confections have done a dodo and now only live in the dusty attics of memory, but others are timeless and still remain, though being considerably less popular than they used to be in their heyday. So in the spirit of reliving those days of auld lang syne, we took a walk down the memory lane with a few people to find out what the world of sweets looked like back then before the days of Cornettos and cream-cheese croissants.

If there was ever a Hollywood walk of fame for Sri Lankan confections, Bulto would definitely be the first to have its name engraved in a star. All wrapped up in oil paper rather like the thala guli (sesame rolls) we still enjoy, Gunasiri Bulto is sort of like an elongated Sri Lankan version of an Everlasting Gobstopper. Most people we spoke to described it in almost the same way—delicious, large, hard, and extremely sticky.

“It would last for ages,” remembers Kumudu Wijeysooriya, 59. “You could pop it into your mouth and still be sucking on it half an hour later.”

The best part was that it was cheap, even by long ago standards. Wijeysooriya remembers five toffees costing just a cent, while most other people we spoke to—mostly the ’80s kids—remember it being around 50 cents a toffee.

Bulto probably went out of fashion after being shouldered out of the competition by its more attractive and colourful peers—it is rather plain looking, all things considered—but it has made a modest comeback. Quite a number of people have unexpectedly stumbled across the sticky candy in supermarkets and little boutiques around the island, but of course, it is neither as good, large or as cheap as it once was.

The person who came up with these names clearly had questionable ideas about marketing—naming an eatable after animal excreta classifies as a pretty bad PR move, all things considered—but strangely, the unconventional name does not seem to have hurt the reputation of this sweet treat at all.

Hoonu beti or mee beti are Sinhalese terms which can be directly translated as ‘gecko droppings’ or ‘rat droppings’ in English. These were the little coloured sugar-coated cumin seeds (though some people also recall another version with candied fennel seeds), which always stood tantalizingly in prominent places on shop counters to attract the attention of passing kids. They were generally measured out in ‘capfuls’—the cover of whatever jar they were in—or little spoons, or sometimes even by hand (people clearly were not big on hygiene back then). However, the multi-coloured confections have not quite gone extinct—there is still a chance you can come across them in the odd little corner shop. There are also various versions of hoonu beti which people use as mouth fresheners, especially in Indian restaurants and eateries after a meal.

Back then these were probably the sweets which kids threw tantrums to get.

Yes, ‘Nice’. And we are not even sure if it should be spelled with a capital letter because no one seems to recall that little detail. It could possibly be one of those fondly used household names, or an actual brand, but nomenclature aside, everyone we spoke to seems to have loved it.

Bernadette Aubrey, 46, describes them as round flat paper-thin wafers, a bit like extra-crispy pancakes. They used to be sold in plain polythene packets and came in a variety of colours like pink, blue and yellow, which invariably never failed to attract children. “The large ones were about the size of a dinner plate and cost 25 cents, while the smaller ones cost just 10 cents,” she laughs. “They were so thin that as children, we used to fold them up until it was small enough to fit into our mouth and then cram the whole thing in.”

She recalls stopping by little wayside boutiques on the way to school and reveling in the wafer-like treat. Sometimes they would also get them from sellers who used to walk around hawking them in little square tin boxes, or as a sort of holder for ice cream when the ice cream man came around.

Nice definitely had a good run while it lasted, but it is not quite out of the picture yet. Of course, the quality has gone downhill and hit subterranean levels—the modern day Nice tastes a lot like cardboard and is never sold on its own anymore—but you can still get your hands on it whenever you have—

You know that typical Western portrayal of tootling ice cream trucks being chased down the streets by swarms of children? Replace the truck with a sarong-wearing, tin bucket toting friendly man and the tootling with the tinkling of a bell and you get a picture of what was—and still is—probably the most looked forward to sweet treat in Sri Lanka.

Bombai muttai is basically a local version of candy floss, long sticky strands of spun sugar which often smell of coconut oil and come in off-white or pink colours. You never found it in a shop—instead, you kept an ear out for the magical tinkling bell (which was often just a number of flattened bottle caps strung together) of the bombai muttai man and then chased him down when you finally heard it. In fact, what made—and still makes—this sugary treat even more enticing was the fact that you can never have it when you most want it—the bombai muttai man would just turn up unexpectedly like the piper of Hamelin, and all the children (and even adults) would literally run out of the house to get hold of him.

“My memories of bombai muttai date back to the early ’70s,” says Ajita Kadirgamar, describing how all the children like herself would either beg their parents for money or madly scramble to find coins when they heard the signature ding-a-ling. She remembers it costing around 25 cents for a small portion, served on a scrap of paper, while a larger portion was served on a paper cone. Other people remember it being served on a Nice wafer, which is how it is still done in this day and age. “I don’t think the texture or the colour of the bombai muttai has changed much over the years,” Kadirgama muses. “It is still pink, with some hard scraggly bits mixed in with the floss.”

Sri Lankans have this inherent affinity for coconut—we cook them, eat them, extract their milk, and even drink from them, and about three quarters of our local recipes involve coconut in some form or the other. Evidently, someone one day decided to capitalize on this craze and took it into their head to sweeten grated desiccated coconut, add some areca nut and bright colouring to it, wrap it up in betel leaves and go hawking. This rather strange item of food is called saravita or saharavita, and most people who spoke of it associated it with watching the perahera.

“It was probably around in other places as well, but we only came across it when we used to go to Kandy for the perahera,” recalls Shani Ranatunga, 49. “Sellers used to wander through the crowd carrying these trays full of them. We obviously didn’t chew betel, so we would buy the saravita, eat all the sweet coconut and then give the betel leaves to the grownups.”

It was such a hit back then that there is even an old Sinhalese song named after it. Saravita, however, is still very much alive and kicking; in fact, there is good chance that you have tried it out, or at least seen it being sold on the promenade at Galle Face Green.

Evidently, there is nothing that makes kids feel more badass than holding a sugar cigarette in between their teeth and pretending to have a smoke.

Carol Wijeyekoon remembers, “They were about ten in a box, little white coloured sweets with pinkish red tops. We would either chew them up or pretend to smoke them like cigarettes and then look high and low for the smoke and fire!” She describes them as resembling the now obsolete Navy cut cigarettes, with a whole box costing about 5 cents.

There were a number of other variations as well which Sri Lankans used to enjoy during their childhood, but sadly, this is one of those confections which have gone extinct. That said, even if it still was around, we doubt parents would be too happy about cigarette-shaped sweets these days.

There are dozens and dozens of other confections which people fondly remember from back in the heyday— Narang bic (little flavoured toffees shaped like orange pips and dusted with glucose), Elephant House ice palam (a popsicle in a triangular shaped box), bulls eyes or goni losindara (those black and white striped minty candies), thal pinatu (a sweet made from the dried pulp of the palmyrah fruit), inguru angili (ginger fingers), Star toffees, Dot toffees and Bernie Butterscotch (old brands of toffees which are practically extinct)...the list goes on. So what sweet treats did you enjoy enjoy as a kid? Do let us know in the comments.