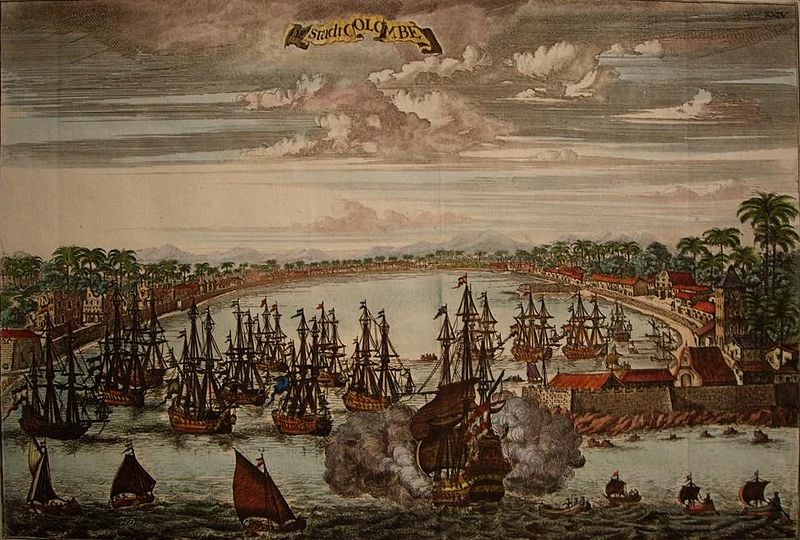 Dutch-Ceylon relations began when Dutch Admiral Joris van Spilbergen arrived in Ceylon with three ships in 1602. He struck up a friendship with King Vimaladharmasuriya I and discussed future relations, including possible assistance to expel the Portuguese who had ruled over the Kingdom of Kotte and the maritime regions since 1580. A second fleet commanded by Sebald de Weert arrived in Ceylon shortly after, to build on the cordial relations established by van Spilbergen, but ended with disaster after he was mistakenly killed when King Vimaladharmasuriya I ordered him imprisoned—“bandapan me balla” (bind this dog), during a heated fracas that broke out during a feast, when an inebriated de Weert made a comment perceived by King Vimaladharmasuriya I to be an insult to the Queen (“Oh, as for the Queen, she will never be at a loss for men”). King Vimaladharmasuriya I was already enraged with de Weert for failing to kill a shipload of Portuguese taken prisoner in accordance with a promise made to him. . Dutch-Ceylon relations cooled for a period after the death of de Weert, until Senerat took over as King in 1604. In 1612, King Senerat entered into a treat with the Dutch in the hopes of expelling the Portuguese from the country, but little came of that agreement, prompting King Senerat to look to Denmark, with who he penned a treaty in 1618. Nothing came of this alliance either, and it was left to his successor King Rajasinha II to attempt to engage the Dutch in a mission to expel the tenacious Portuguese. Rajasinha II reached out to the Dutch in 1638 and the Dutch complied with his request, sending several ships to engage in skirmishes with the Portuguese over the years, finally expelling the Portuguese from Ceylon in 1658. Over the next decades, the Dutch established control over parts of Ceylon, and only left when the British acquired Dutch possessions through direct conquest in 1796. In the century or more that the Dutch held sway over the provinces of Ceylon, it impacted local culture and customs in ways that still linger today. Take for instance the Roman-Dutch law, a combination of early modern Dutch law and Roman law, that is the general law in Sri Lanka today. Place names such as Hulftsdorp (Hulft’s Village), Wolvendaal (Dale of Wolves) and Bloemendaal (Vale of Flowers) are also of Dutch origin, as are loan words assimilated into the Sinhala language such as istoppuwa (verandah), kamaraya (room), kanturowa (office), iskuruppuwa (screw) and ketalaya (kettle). In addition to these, families of the Sinhalese elite took on Dutch first names such as Cornelis, Hendrick, Jacobus and Philipsz, Cornelia, Henrietta and Johanna. Dutch influence also spread in terms of religion (Calvinism) and architecture—many of which stand today. Perhaps the most lasting testament of Dutch occupancy in Ceylon are the people it left behind. Referred to today as Dutch-Burghers, these are the descendants of Dutch men and native Ceylonese women. The Dutch-Burghers in Sri Lanka today sport first names such as Adrian, Willham, Graham, Simone and Elissa, while many of their surnames take on the tussenvoegsel, or prefix ‘van’ or ‘de’ meaning ‘from or ‘the’. Today, in Sri Lanka, many of British, French, Swiss, Belgian and other European descent have come to be known as “Dutch Burghers”. This article however, lists a number of names of those directly descended from the Netherlands, and explains what they mean.

The name Arentz is a variant of the name Arends and means “eagle”. Arentz or Arends  also derives from the name Arnould/Arnout, which stems from the Germanic word aran, also meaning “eagle”.

Claessen is a patronym, meaning son of Klaas. Klaas is a short form of the name “Nicholas”, which is a Greek name meaning “the victory of the people”. It is a common name in the Netherlands.

De Jong means “the younger”, and is used when two of the same family hold the same first name. Its English equivalent would be “junior”. It is a very common surname, used more often than “De Oude”, which means “the elder”.

Van de Berg means “from the mountain”. Because there are no “mountains” as such in the Netherlands, the name “berg” (mountain) refers to “higher ground”. It indicates that the holder came from an area on higher ground.

Van Buren means “from Buren”. Buren is a small town on the island of Ameland in the north of the Netherlands, as well as a small city in the Dutch province Gelderland. Its name is derived from the word “bur” meaning “house” or “dwelling”.

De Bruin is a common surname in the Netherlands and means “the brown”. It is a patronymic name inherited from a male ancestor, and probably refers to the colour of one’s hair. Its English equivalent is, of course, the surname “Brown”. Variants are Bruin, Bruijn, Bruyn and Bruins

Loos is a name of Dutch and low German origin. It can be a toponymic (place name), patronymic or descriptive name. In certain areas, the name Loos is a short form of the name “Lodewijk”, which is the Dutch name for “Louis”. In other areas (North Germany) it may be derived from the name “Nikolaus”, meaning “conqueror of the people”.

Van  Dort, or “from Dort” is a toponymic name meaning from the city and municipality of Dordrecht (colloquially “Dordrecht”, and in English “Dort”) in Western Netherlands in the province of South Holland.

Cover: Dutch Colombo, based on an engraving circa 1680, Philippus Baldaeus. Image courtesy wikipedia